“High-performance factory pickup truck.” What truck did that phrase make you think of? Yeah, it was a Ford F-150 Raptor, for sure. And why not—we’re talking a 450hp twin-turbo engine, Fox Racing shocks, 10-speed gearbox, and fat-fendered styling more aggressive than a junkyard dog guarding a plate of bacon. To duplicate the Raptor in RC form, Traxxas tapped its best-selling Slash platform. As the original, realistic off-road RC truck, it’s the perfect fit for the Raptor’s proportions as well as its performance. The Traxxas Raptor looks like the real deal in action, not just on the shelf, and does it at 1/200th the price. If you’ve got $52,000 to burn, head to your Ford dealer. Everyone else, head to the hobby store—and here’s what you’ll get. 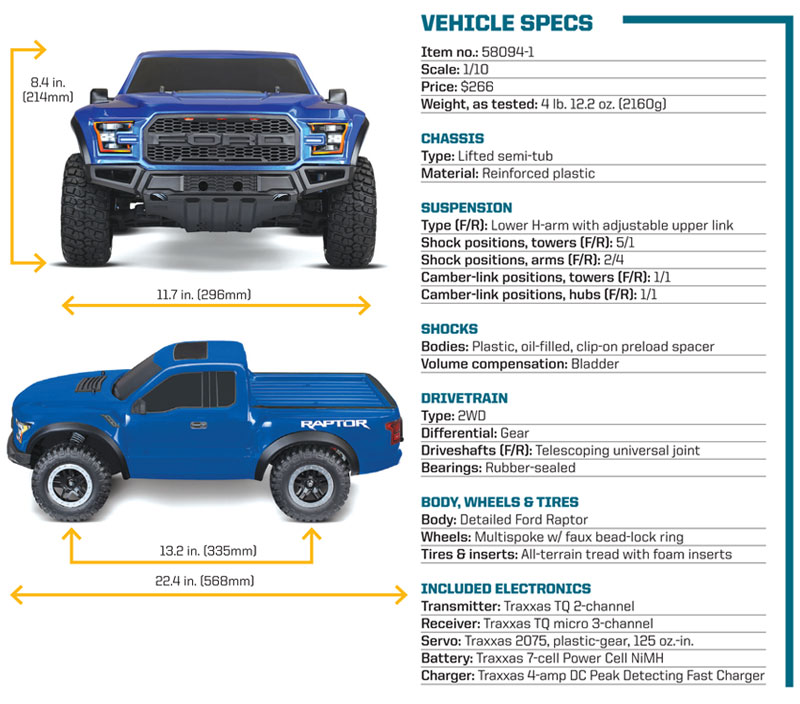 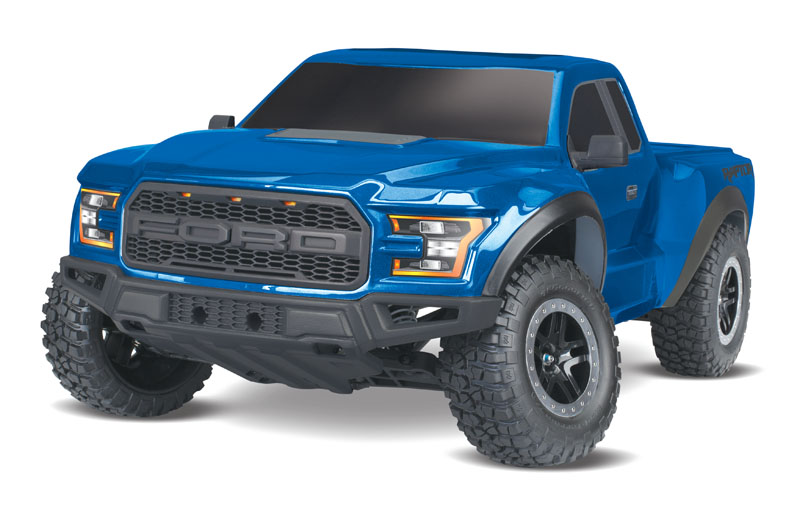 Injection-Molded Detailing
The Raptor arrives fully painted and decaled, but Traxxas doesn’t rely on stickers for the polycarbonate body’s most significant details. The grille is a separate, molded part, as is the hood vent. A new chassis-mounted front bumper unique to the Raptor integrates with the body, and screw-mounted rear-view mirrors are installed. Decals duplicate the full-size truck’s factory graphics and black fender flares, and official Ford color options include Oxford White, Lightning Blue, and Magnetic (a dark metallic gray). 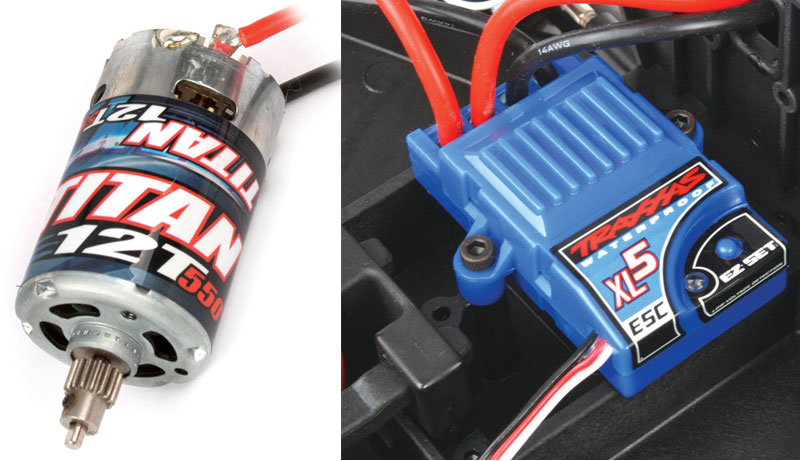 Titan 550 Power
You’ll find the Titan 550 motor in no fewer than 15 Traxxas models, so you could say that it’s pretty well proven. The extra-long can improves torque compared to a 540, and cooling vanes on the armature help keep temps in check. Install the included, optional 23T pinion gear and the Raptor will hit 31mph on Titan power. The equally tried-and-true XL-5 speed control dishes out the amps, and includes a Training mode to reduce speed and power by 50 percent—perfect for letting noobs take a spin. As with all Traxxas electric models, the servo and speed control are waterproof, and the receiver is protected inside an O-ring–sealed box. 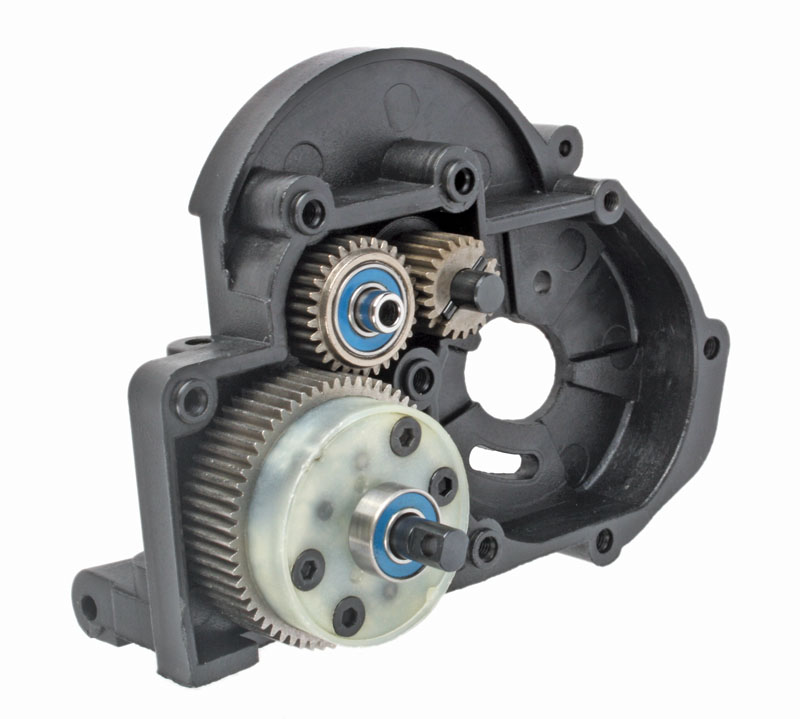 Metal-Gear Transmission
Traxxas first went metal-gear with the Velineon brushless-powered Rustler, Bandit, and Stampede, and quickly made the “brushless-ready” gears standard on all the other Traxxas vehicles that use the Magnum 272 gearbox. That includes the Raptor, so if you decide to upgrade to brushless power, the gearbox already has the strength required to handle the extra torque and rpm. Like other Slash models, the Raptor also gets Traxxas’ “Revo-spec” slipper clutch, telescoping universal-joint axles, and a full set of rubber-sealed ball bearings. 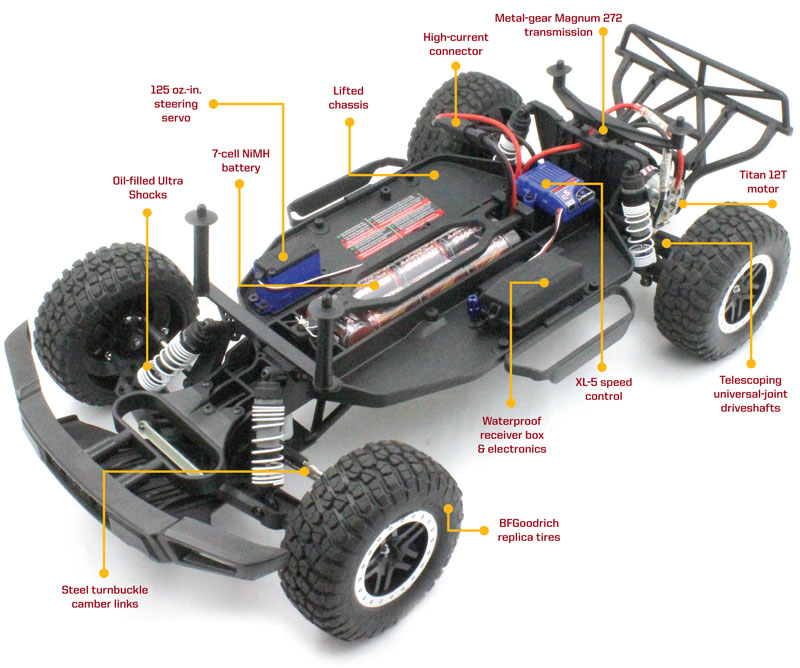 Lifted Chassis
The Raptor gets the original-style Slash chassis, which offers a full 3.5 inches of ground clearance to straddle obstacles. The lift also allows the chassis to tuck under the body at a realistic ride height—much more attractive than some other trucks that hang their chassis well below the body’s rocker panels. Also nice: The main chassis is molded in black instead of the usual gray, which ties in nicely with the truck’s other black plastics. 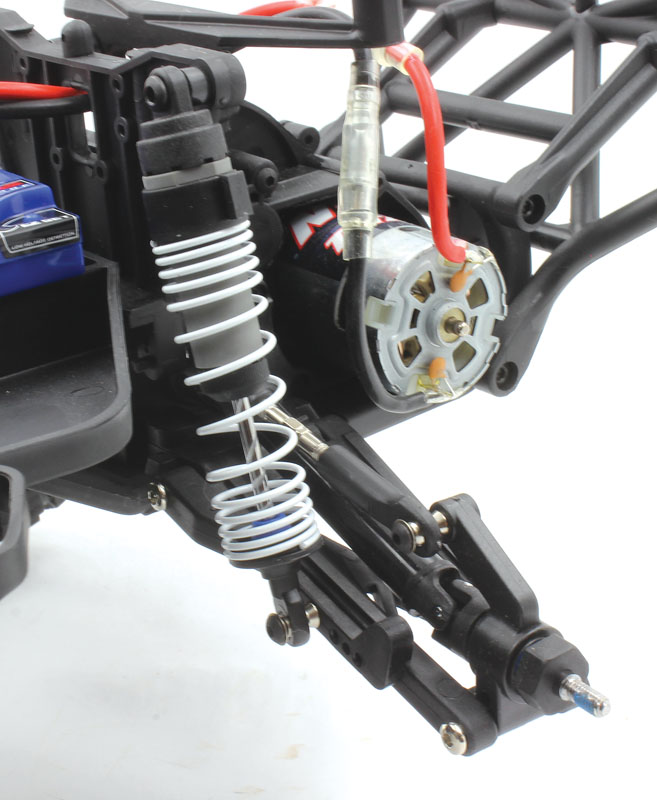 Ultra Shock Suspension
Slash models are known for their active, supple suspension, which can be credited to Traxxas’ high-capacity Ultra Shocks and their progressive-rate springs. The plastic shock bodies use dual X-rings to keep the silicone oil where it belongs (inside the shocks, of course), and the springs offer a soft rate for small bumps, then get firmer as the suspension gets deeper into its stroke to soak up bigger hits. Want to mess around with camber and toe? The 4mm steel camber links let you experiment. 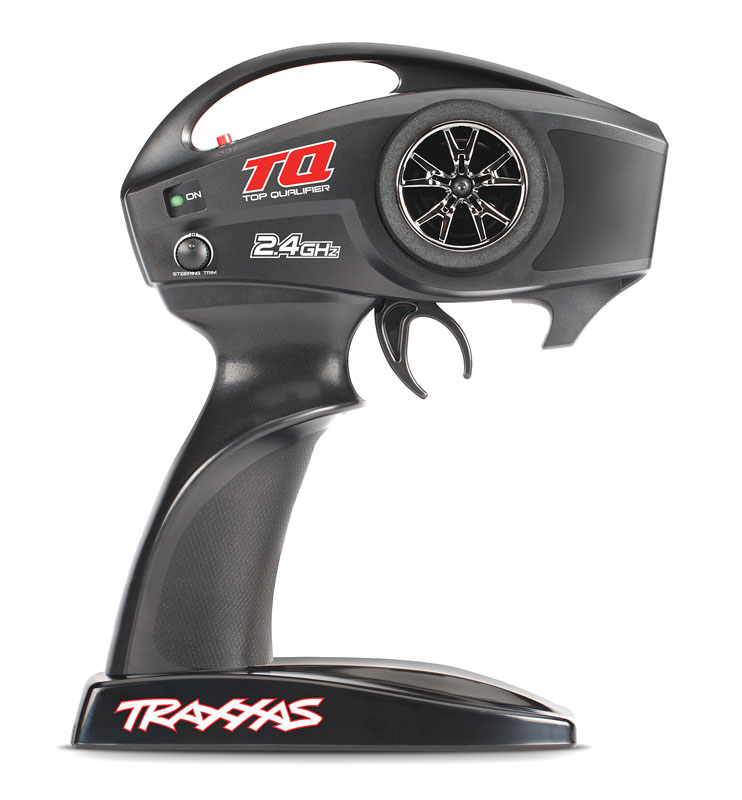 Traxxas keeps it simple in the radio department with the TQ. Steering trim is the sole adjustment, and there’s no external antenna to fuss with (or break). Good range, nice feel, does the job. 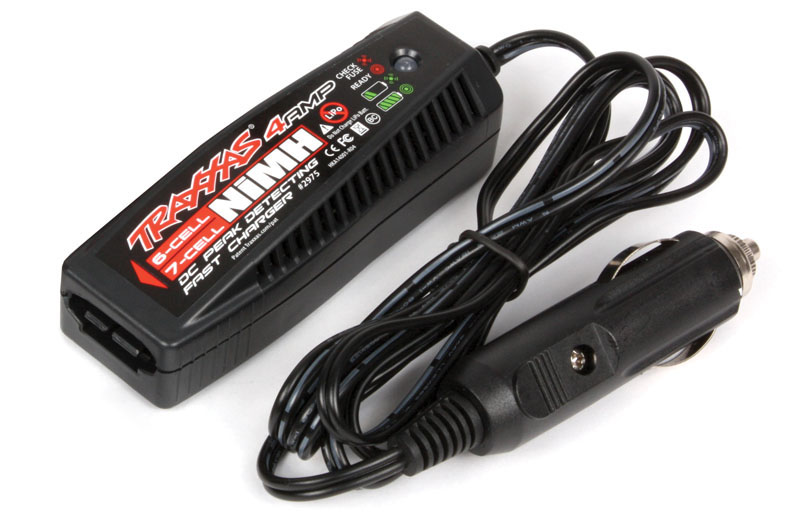 Power Cell NiMH Pack &  Fast Charger Included
Traxxas supplies a 4-amp charger right in the box, so you won’t have to wait hours to charge the included 7-cell 3000mAh battery. The charger will juice up the pack in about 45 minutes, and shuts off automatically when the pack is fully charged. One catch: It’s a DC charger, so you’ll need to run it off the 12V power port in a full-size car. Or you can get the optional AC power supply (#2976, $25) for convenient plug-into-the-wall charging. 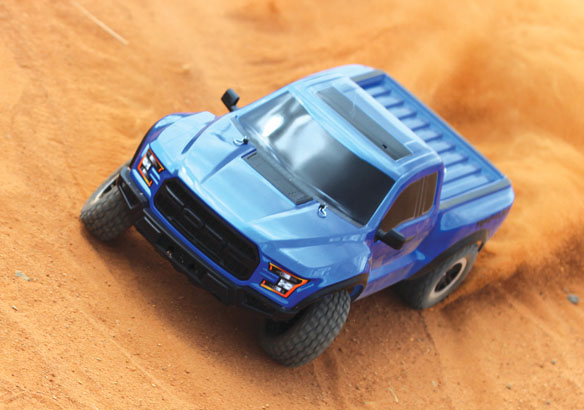 Behind the Wheel
Before I even talk about the performance of the Traxxas Ford Raptor version of the Slash, let’s talk about how great this truck looks. Traxxas did a great job of making the body look like the real deal. The Lexan portion of the body has crisp lines and well-detailed stickers, which bring it to life. The injection-molded parts, like the mirrors, grille, and bumper, are really nice touches. The truck looks pretty good on the shelf, but these things were meant to be driven, and I gave the Raptor a solid thrashing, starting with a street session. The Slash is known for leaning hard in the turns, but the Raptor version leans a little more because the Ford body sits higher and is heavier (10 oz. versus 6 oz. for a short-course-style body). The BFG tires offer a ton of grip, especially with all the weight transfer thanks to the body roll, but the firm rubber allows some slip to help prevent the truck from rolling over. Added bonus: The tires squeal as they break loose. If you drive a full-size Raptor as if you’re getting away from a bank robbery, it’ll roll and squeal the same way. Even better, just look up a Super Stadium Truck pavement race on YouTube—that’s the kind of action you can expect. I installed the 23T “speed pinion” and clicked off 31mph consistently, but went back to the 16T pinion for the rest of testing. The Raptor—and all the Slash 2WD models—are too much fun to limit to drag runs up and down the street, and the stock gearing is still good for 25mph. On dirt, cornering forces result in more slip and less body roll, but the Raptor is still easy to control. The TQ’s throttle trigger has a relatively firm spring, which helps apply throttle precisely to control slides. The steering servo gets credit too, as its 125 oz.-in. of torque makes sure the tires go where you aim them. The suspension feels well damped, allowing the truck to float over rough surfaces and keeping the chassis from bottoming out when coming off jumps. In technical terrain with rocks and roots, the lifted chassis helps prevent the Raptor from high-centering on obstacles. The skidplates will take a beating, but that’s what they’re there for. Jumping the Raptor took a little finesse because it likes to fly nose-down; I suspect the body and large bumper hold more weight up front than a short-course-style Slash body. A little blip of the throttle was all I needed to level the truck. 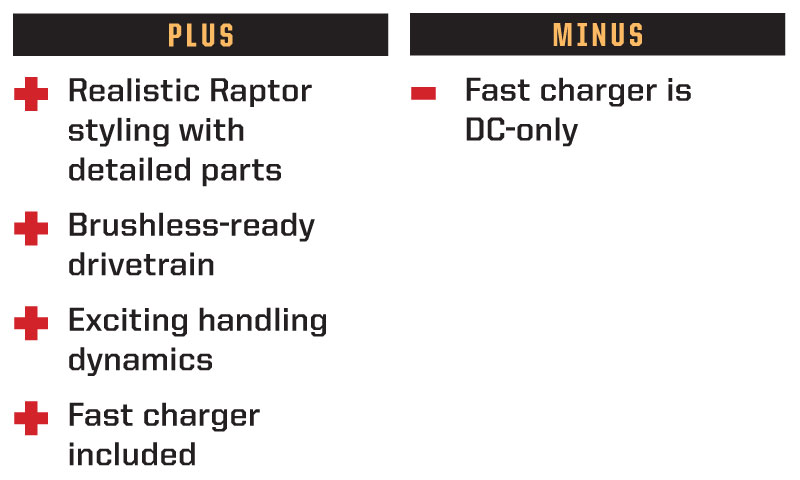 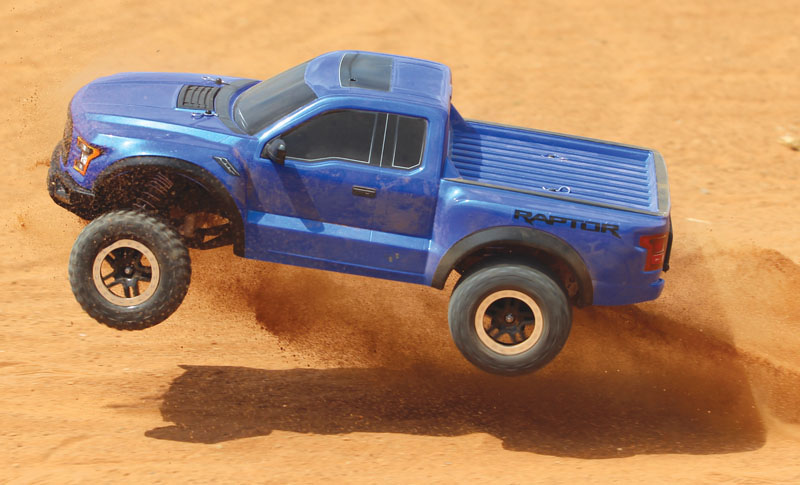 Final Word
The Slash is a best-seller for Traxxas, and the latest Raptor look is a high point for the line. Its realism extends to its driving dynamics, which makes me wish for a version with OBA (on-board audio) to complete the illusion of a shrink-ray’d Raptor tearing up my yard. Stock performance is enough to keep drivers of all skill levels entertained, but if you want more juice, the rig is ready to go brushless with no mods required. But if you do want upgrades, Traxxas offers plenty—as do countless aftermarket brands. All the Traxxas Slash models are versatile, tough, and fun, but when an RC rig looks as good as the Raptor does, I have no problem putting down this Ford as my favorite.