TQ is proud to announce that jADRENALyNE Racing is now distributing TQ cars and accessories in South Africa.

Upon taking their first delivery of TQ equipment, it was straight out to Round 3 of the South African National Championship Series. Drivers Eben Coetzee and Graham Hewer along with owner Jan Labuschagne received their vehicles just before the event and stayed up until the early hours of the morning before practice, to build their new TQ vehicles.

The hard work paid off immediately. All three drivers qualified in A Mains during the event. Eben put in fantastic runs in ST Modified with his SX10T. He had some of the fastest laps of the event and qualified 2nd overall. The youngster backed that up by running on a TQ pace in every round of 4wd modified with is SX10 4w only to have speed control problems knock him out just before the finish of each run. His times were still good enough to qualify for the B Main! Graham was also a quick study: He qualified 7th in the A Main of 2wd Modified and in 4wd Modified. Jan qualified 8th in the Stock ST class with his new SX10T.

Eben won one of the three A Mains to finish 2nd overall in the ST Modified class. In 4wd Modified (with his ESC problems solved) he walked the win in the B Main, with times faster than ANY of the 4wd A Main runs!! Graham continued his steady climb with both new cars, finishing 7th in 2wd Modified and 8th in 4wd Modified. Jan also completed the event, finishing 9th in the Stock ST class.

It was a tremendous introduction to the vibrant South African race scene for TQ Race Products. Special thanks to Eben, his father/mechanic Buks, Graham and Jan for getting the cars ready so quickly. The better news: all three drivers are in the Top 10 in points for the year long championship!

Watch out for the next round! 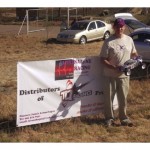 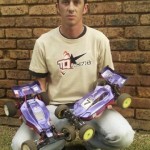 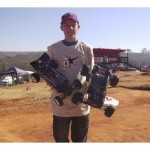