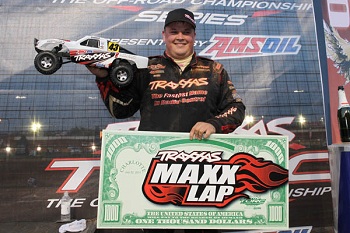 2010 TORC Pro Light champ Casey Currie got the jump on Top Qualifier RJ Anderson and took the top spot by the second turn, a lead he did not relinquish throughout the 20-lap race. Samuel Hubinette (Mopar/Ram/BFG)went to work and eroded Currie’s lead, but could not get around him. Behind Hubinette, Andrew Caddel (Traxxas/Mopar/Amsoil/BFG/St. Jude Children’s Research Hospital)and RJ Anderson battled for third, with Caddell fighting not only his competition but also a blown power steering pump. Caddell held on to not only place third, put also put in the fastest lap of the race and earned the $1000 Max Lap bonus on top of the standard $1500 third-place payout. Hubinette earned $2500 for second, and winner Casey Currie pocketed the big $5000 check.

Baja 500 winner Bryce Menzies’ Mopar-powered Ram appeared untouchable for virtually all of the Pro 2WD race, even with Rob MacCachren giving it everything he had in his own Mopar Ram Truck. “Bryce got the holeshot and checked out. We didn’t have it for him,” acknowledhed MacCachren. After the competition yellow at lap 11 of the 22-lap race, Menzies again got the jump but MacCachren stayed closer than he did in the first half. As the race neared its end, MacCachren was finally going door to door with Menzies and pulled an outside/inside move going into the final turn to take the lead as Menzies stalled, and was unable to restart. Scott Taylor and Traxxas’ Jeff Kincaid also got around Menzies to take the podium, while MacCachren went on to the win and the Oakley Bomb award for the fastest Pro 2WD. “Ultimately, I got by because Bryce broke,” admitted MacCachren. “But we had to go as hard as we absolutely could to stay with him.”

TQ Rick Johnson set an unbeatable pace with his Red Bull-backed Ram, posting the day’s only sub 42-second lap in qualifying and winning Friday night’s race wire to wire with an Oakley Bomb Award as the cherry on top. “Man, we were killing it on our BFGs,” said Johnson. “We got every holeshot and went wherever I wanted to go. This was our first win and I hope it’s our first of many.” With Rick out in front, the Charlotte fans keyed on the battles for the remaining podium spots. After Johnny Greaves exited the race with mechanical issues, Traxxas’ Mark Jenkins turned up the heat on Scott Douglas in a bid to move up to second. This was the battle to watch, as Jenkins raced the panels right off of his truck until a flat right front tire slowed his pace. Running on the liner and proving the reliability of his BFGoodrich tires, Mark took third after a crowd-pleasing run on Douglas.

Round 6 of the TORC series saw Traxxas’ Andrew Caddell climb the podium in Charlotte NC once again, this time in second place after taking third the evening before. USAC inverted the order of Round 5’s top six finishers, so Caddell started in fourth for Round 6. On the green, Todd Cunningham took the holeshot, but Caddell quickly overtook Cunningham to move into the lead with Casey Currie and Samuel Hubinette close behind. The three battled until Traxxas’ CJ Greaves got together with Hubinette, putting Hubinette’s Mopar-powered Ram into a violent cartwheeling flip that ended in a spectacular fireball. The already-close battle only grew closer as the yellow flag put the trucks bumper to bumper. On the restart, Caddell kept Currie at bay and Brad Lovell joined the top three, until Caddell bicycled his no. 43 Traxxas Pro Light in turn four, rolling it onto its side–but only for a moment! Caddell pointed the front wheels into the dirt, stood on the gas, and found just enough traction in his left rear sidewall to push past the truck’s tipping point and drop it onto four wheels. Caddell drove to the hot pit as the race went to competition yellow, then returned to the lead lap in last place. Back under green, Caddell went to work and painstakingly reeled in Todd Cunningham and Brad Lovell to move into second, but there weren’t enough laps left to bridge the gap to leader Casey Currie.

Despite putting in what TORC writer Pat Schutte called “one of the best performances of the year,” Caddell was focused on his team and not his incredible ride. “I got the lead, tried to set a pace. Tried to gap (the field) before the yellow and I hooked a rut there. Feel bad for my team … they gave me a great truck tonight.” Caddell downplayed his run back to the front, but winner Casey Currie was quick to show his appreciation for the Traxxas Pro Light driver’s performance. “For him to come back to second was a hard charger right there,” said Currie.