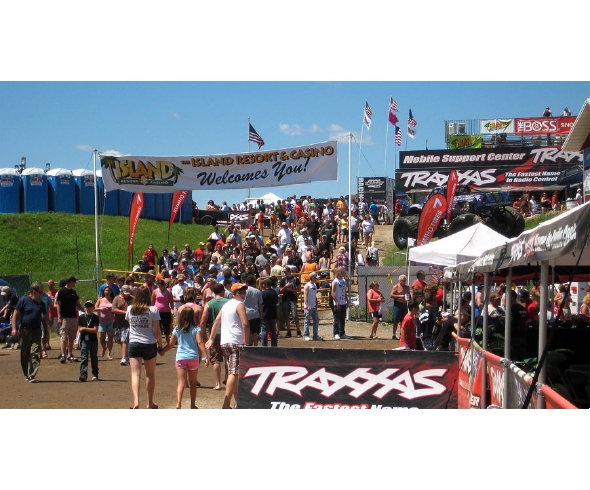 Bark River, MI: If there are two tracks that could be considered the twin titans of short course racing, it’s Crandon International Off-Road Raceway in Wisconsin and Michigan’s Bark River International Raceway. After a highly successful start at Crandon, the Traxxas Off-Road Championship series came to Bark River for Rounds 3 and 4 of the 12-round series. The storied short-course venue gave race fans some of the most exciting TORC action yet as Traxxas-sponsored drivers raced to the podium with five trips to the box in three classes—and delivered plenty of high-flying thrills along the way.

Traxxas-sponsored Rick Huseman made his third consecutive trip to the podium with second place in Round 3’s Pro 4X4 race. Rick moved into second behind Johnny Greaves after dueling with fellow Traxxas driver Mark Jenkins, who was himself working to stay ahead of brother Mike Jenkins in the Traxxas-dominated front half of the field. Mike got around Mark to take over third as Mark’s no. 25 Pro 4X4 faded with mechanical issues, which eventually forced Mark to exit the race at the halfway point. Racing in third, Mike battled with Scott Douglas, who was in fourth and looking to move up. Both drivers were leaving it all on the track as they pushed their trucks harder and faster through each turn. Scott Douglas showed his proven skills as he swooped and dove to find a way into podium position, but Mike was always able to find more traction, more power, and a better line to counter every move Douglas made. Meanwhile, Huseman was in the chase for leader Johnny Greaves, who was putting in a nearly flawless performance. Pushing his truck to the edge of control in pursuit of the leader, Rick nearly threw it all away as his Monster Energy/Traxxas Pro 4X4 bicycled high on two wheels in the S-turn before the track’s massive “ski jump.” Rick counter-steered to bring the truck down, but this caused it to recoil in a snap turn and shoot off the track. Still in control, Rick held tight as his truck caromed through the marsh-like tall grass and returned to the track, no worse for wear—and without losing a position.

The mandatory mid-race yellow flag regrouped the field, but there would be no surprises at the restart as the trucks resumed their running order: Greaves, Huseman, Jenkins, Douglas, Barlow, Drews. Greaves and Huseman spread out at the front of the field, leaving the most intense racing to Mike Jenkins and Scott Douglas. With just two laps to go, it looked like Mike would make his first return to the Pro 4X4 podium since winning the final round of the 2009 season in Las Vegas. But as the two drivers raced through turn one, Douglas’ truck contacted the rear of Jenkins’, knocking him off the track and bending the no. 47 Traxxas truck’s rear sway bar linkage. This tweaked the suspension and effectively eliminated the truck’s ability to turn right with any speed resembling race pace. Although his hobbled truck left him unable to defend his position against Douglas and Steve Barlow, Mike went on to finish the race and collect valuable series points. Rick Huseman collected enough points of his own in second place to keep him on top of the Pro 4X4 points chase as the TORC series headed into Round 4.

After bursting onto the TORC series scene with 1-2 finishes at Crandon, Andrew Caddell was the talk of the Traxxas Pro Light class at Bark River. Caddell did not disappoint, as he and rival Casey Currie put on an impressive display of driving skill in a battle for second place. Caddell got around Currie just before the mid-race yellow, and took aim on race-leader Marty Hart as the anticipation built for the green flag. With full-throttle racing again underway on the land-rush straight, Caddell floored his V8-powered truck and looked to the inside of Hart as they rounded the first turn, but could not complete the pass. As he had in the first half of the race, Hart put his many years of Pro Light experience to work and opened up his lead, this time all the way to the checkers and the $5000 purse, plus another $1,000 bonus for posting the Traxxas Maxx® Lap, the fastest lap of the race. Caddell took second to secure the $2,500 payout, and enough points to maintain his overall series points lead in Traxxas Pro Light heading into Round 4.

In only his second weekend of Pro 4X4 racing, Traxxas driver Mark Jenkins climbed the podium with a second-place finish in Sunday’s epic 9-lap brawl. When the green flag dropped, the field of trucks charged into Turn 1 in their quests for the top step of the box. With Steve Barlow out in front and Rick Huseman, Mike Jenkins, and Scott Douglas three-wide on his bumper, contact was inevitable as the drivers made an all-out charge for the front. Huseman and Mike Jenkins made wheel-to-wheel contact, causing Huseman’s truck to tuck into Mike’s Traxxas ride. In an explosion of dust and debris, Mike’s truck drove up and over the front of Huseman’s Pro 4X4, with both trucks shedding fiberglass. Barlow held onto the lead while Scott Douglas ran an outside line to take second. From the back of the pack, Johnny Greaves slipped through the melee into third, with Mike Jenkins in fourth and his brother on his bumper in fifth. There was more contact before lap one was in the record books as Scott Douglas careened into a concrete wall and then into Mike Jenkins, sending both trucks off track. Mark pounced on the opportunity and raced to the mid-race caution flag in third with Huseman in tow.

The restart was just as exciting to watch as positions were shuffled among Barlow, Jenkins and Huseman. As Turn 2 approached, Huseman ducked to the inside to grab the second position while Barlow ran an outside line that opened the door mid-air for Jenkins in Turn 3. However, Mark would not stay in third for long, as he closed the gap on Huseman on the next lap, nearly completed an airborne pass over the ski jump, then got around the no. 36 Monster Energy/Traxxas truck as they touched down and entered the next turn. Barlow also passed Huseman and stayed in close pursuit of Mark. While under heavy pressure for his podium spot, Mark Jenkins showed he has what it takes to run at the front as he hustled his Traxxas/BFGoodrich/Amsoil ride at the limits. Flying over 200 feet off the Monster Energy jump and railing through the esses on two wheels for nearly 50 feet, Mark summoned every bit of power and traction his Pro 4X4 could deliver.

The checkered flag waved for Johnny Greaves with the win, and for Mark Jenkins with a hard-fought second place finish and his first TORC Pro 4X4 podium. Mark stated on his finish, “Saturday’s race was disappointing as the engine’s oil system failed causing me to sideline the truck. The Jenkins Brothers crew did a great job today, prepping a back-up Pro 4×4 which actually had a better set-up than yesterday’s t. I got a little anxious when I saw the oil temp needle was buried above 300 degrees at mid-race but the engine stayed strong thanks to Amsoil and we grabbed a podium!”

CJ Greaves Holds Super Buggy Points Lead With Back-to-Back Podiums
Fifteen-year-old CJ Greaves, a future TORC pro and official “chip off the old block,” had another successful weekend of TORC racing with back-to-back second place finishes in the Super Buggy class–the elite of open-wheel TORC off-road racing. The son of Pro 4X4 star Johnny Greaves, CJ has been a force in Super Buggy since his first race. Bark River marked his fifth and sixth consecutive trips to the podium, with three wins and three second-place finishes in the series to date. John Frana put an excellent setup to use in Saturday’s race to take the w
in, while Sunday’s race would likely have been another win for CJ had a balky clutch not caused him to suffer shifting problems. CJ raced through the field to take the lead, only to drop to second with a missed shift in the final laps that gave winner Steve Krieman an opportunity to pass. Though one step lower on the box than he aimed, CJ is still out front in Super Buggy series points with a 34-point gap on the rest of the class.