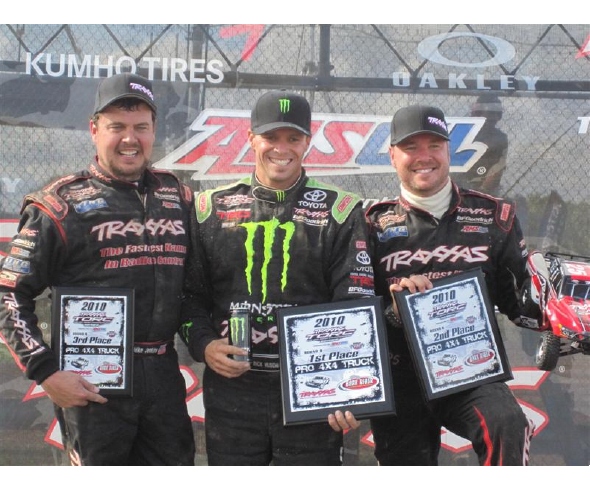 August 14-15, Bark River, MI: The Traxxas TORC series returned to Bark River International Raceway for Rounds 7 and 8, the second visit the series has made to the historic Michigan venue in 2010. When TORC last visited the fast and challenging track for Rounds 3 & 4, Traxxas-sponsored drivers made five trips to the podium, including Mark Jenkins’ first trip to the box in 2010 with second place in Pro 4X4. The return visit to Bark River was even more successful for the Traxxas drivers, as they upped the podium count to seven, and for the first time, Mike and Mark Jenkins shared the Pro 4X4 podium. The Jenkins brothers joined Traxxas-sponsored driver and race-winner Rick Huseman to complete a Traxxas sweep of the Pro 4X4 class. Traxxas drivers Jeff Kincaid and Andrew Caddell won the Pro 2WD and Traxxas Pro Light classes for a clean sweep of the TORC pro classes in Round 8. Read all about it below—and be sure to catch every holeshot, pass, and crash in eye-popping High Definition starting Thursday, September 2 on Discovery HD Theater!

Traxxas Pro Light: Andrew Caddell Podiums Round 7, Wins Round 8, and Cashes In With Maxx Lap Bonuses

Traxxas Pro Light front-runner Andrew Caddell was back in top form in Bark River. As the dust hung in the air from the start of Round 7’s race, Andrew shook out to third position behind Casey Currie and the seemingly unstoppable Marty Hart, who was looking for his fifth consecutive Traxxas Pro Light win. Caddell was on Currie’s bumper from the start, and found his passing opportunity before the first lap was over as Currie spun his truck in the right-hander after the “Monster Hill”, Bark River’s infamous hilltop jump. With Currie dispatched, Caddell could now focus on chasing down Marty Hart, who had amassed a lead of about ten truck lengths. Caddell was able to reduce the gap, but it was the mandatory yellow flag that finally put him on Hart’s bumper. At the restart, Caddell took the inside line through the “horseshoe” turn to go door to door with Hart, but Hart managed to hold off the hard-charging Traxxas driver and pull out the lead as the trucks launched over the start/finish tabletop jump. For the remainder of the race, Hart and Caddell put on a master-class in short-course racing as they distanced themselves from the field, flinging their trucks through the turns, each countering the other’s moves. Caddell was a threat in every corner and went door to door with Hart in the final turns, but Hart held on for the win as Caddell took a well-fought second place. Hart pocketed the $5,000 Traxxas Pro Light purse, Caddell earned the $2,500 check, and third-place finisher Ross Hoek went home with $1,500. In addition to the purse dollars, Caddell earned an extra $1,000 by posting the fastest lap of the race to earn the Maxx Lap Award.

In Round 8, Caddell found himself between Casey Currie and Marty Hart at the start, but Hart overtook both drivers for the lead before the first lap was through. About three truck lengths separated each of the top three trucks through lap two, but Caddell was soon on Currie’s bumper and ready to move into second as Hart opened up a gap on the dueling drivers. Currie was able to counter Caddell’s passing attempts, until Caddell made an aggressive but clean inside pass for second as he and Currie rounded the “Kumho Tires” turn, just in time for the mid-race yellow. With the top three now tightly grouped for the restart, Caddell had to be ready to hold off Currie as he tried to make a move on Hart for the lead. As the green flag unleashed the Traxxas Pro Light field, Caddell tried an inside line through the horseshoe but Hart maintained his momentum to hold the lead by a slim margin. Caddell kept Hart in his cross-hairs, looking for his opportunity to pass, then overtook him for the lead with seeming ease as the trucks floated over the Monster Hill. As the trucks touched down and Caddell motored away, Hart pulled off the track with mechanical trouble. The duel that had propelled Hart and Caddel to a sizeable gap on third-place Currie and the rest of the field now represented an insurmountable lead that Currie could not bridge. Caddell’s last lap was essentially a victory lap, as he took the checkers unchallenged to earn the $5,000 purse and another $1,000 Maxx Lap award.

Round 7 saw Jeff Kincaid run as high as second place, but problems with his steering system lead to two spinouts. Kincaid battled back after each spin, but he finished the race just off the box in fourth place while Jeremy McGrath went on to his first career win in Pro 2WD. With the steering issues resolved for Round 8, Kincaid was looking to notch a win. Jeff blasted out front to take the holeshot, then checked out with a big gap on the field. The mid-race yellow gave second-place driver Jeremy McGrath (not to mention the entire Pro 2WD field) a chance to steal the lead, but Kincaid once again rocketed to the front. McGrath mounted a strong challenge, but Kincaid would not be beaten as he shredded the track with the skill that earned him seven consecutive Pro Light championship titles. Kincaid took the convincing win, with Jeremy McGrath and Rob MacCachren joining him on the podium. Kincaid’s victory marks his second TORC series win since his round 2 victory in Crandon, and his third win behind the wheel of his Traxxas Pro 2WD truck: TORC fans will recall that Jeff also won the Crandon Cup during the TORC series opening weekend, racing against both Pro 2WD and Pro 4X4 trucks.

Rick Huseman is no stranger to the top step of the podium, but a Pro 4X4 win in Bark River had eluded the popular Monster Energy/Traxxas driver—until Round 7. At the start, Huseman lead out Johnny Greaves, Scott Douglas, Steve Barlow, and the Traxxas trucks of Mark and Mike Jenkins. Mark Jenkins made quick work of Barlow to move up to fourth, with his eye on Douglas and a podium spot. Two laps later, Jenkins’ charge to the front ended as the left front suspension of his no. 25 Traxxas Pro 4X4 collapsed when the truck touched down from the Monster Hill jump. Mark kept the truck shiny-side up and was able to pull off the track safely as Huseman extended his lead over Greaves, Douglas, and the rest of the field. Knowing the mid-race yellow would bring the trucks together, the drivers settled into a groove and waited for the flag. The crowd’s anticipation for a Huseman/Greaves face-off was palpable as the trucks marched toward the restart. On the green, Huseman unloaded the full fury of his Monster Energy/Traxxas Pro 4X4 to reestablish his lead over Johnny Greaves. Greaves was a constant threat and left it all on the track as he raced fender to fender with Rick, but Huseman was unstoppable and took the win—one of Rick’s many wins in a Pro 4X4, but his first in a Pro 4X4 at Bark River.

Round 7’s Pro 4X4 race was a sprint for the finish; Round 8’s race was a brawl. Scott Douglas held the lead as the pack settled, with Traxxas’ Mike Jenkins in second followed by Steve Barlow, Johnny Greaves, Traxxas’ Mark Jenkins and Monster Energy/Traxxas’ Rick Huseman. Mike Jenkins mounted a relentless attack on Douglas as the trucks tore through lap one. As the field piled into the horseshoe turn, no driver giving an inch, Jenkins’ no. 47 Traxxas truck was pushed wide and over the berm in an explosion of dirt and debris. Mike re-entered the track at the back of the field without apparent damage to the chassis or suspension, but his left rear tire was running on the liner and wo
uld not support a full racing effort. Scott Douglas retained his lead after the melee but the running order behind him changed as Greaves, Huseman, Barlow, and Mark Jenkins continued their pursuit. As lap two unwound, Douglas, Greaves, and Huseman went three-wide. Inevitably, contact was made and Huseman moved into the lead as Douglas dropped to second in a battle with Greaves, and Mark Jenkins chased Barlow for fourth. Incredibly, Mike Jenkins remained on the lead lap even with a flat tire. Back up front, Huseman stretched open a gap on the field as Greaves moved into second, bumping Douglas to third. The order held as the race went yellow, and Mike Jenkins went to the hot pit. With the controlled frenzy of an Indy 500 pit stop, the Traxxas crew replaced the left rear tire in time for Mike to rejoin the field under yellow.

Bumper to bumper, the trucks readied for the restart. The deafening roar of over 5,000 horsepower echoed across the raceway as the green flag set the final battle into motion. Huseman maintained his lead but Greaves fell to third as Douglas pushed ahead. Contact with Douglas knocked Rick Huseman off the track as he entered the whoops section on his way to the start/finish tabletop. As Douglas recovered, Mark Jenkins leaped to the front and put his no. 25 Traxxas truck into the lead ahead of Douglas and Huseman. Douglas pressured Jenkins hard, but Jenkins was unshakeable and kept Douglas behind him. And then—spinout! Both Jenkins and Douglas slid into the infield as Huseman took over the lead with Barlow in second and Mike Jenkins in third. Douglas won the race to rejoin the pack and took the fourth spot, with Mark Jenkins in fifth. Barlow’s truck began to slow and smoke, and the order changed again as the field made their way around him. Huseman held a commanding lead as the white flag signaled the final lap, and Douglas was left to defend himself against the charging Jenkins brothers. As the three drivers battled, Mark Jenkins and Douglas connected, but this time Mark emerged with the advantage as the drivers recovered—but not before Mike Jenkins had passed them both! As Rick Huseman made his final run to the checkered flag, the race for the podium came down to brother-vs-brother with Mike and Mark Jenkins pulling no punches in the final few turns before the finish line. Mark got the edge and took second, with Mike close behind in third to complete Traxxas’ sweep of the Pro 4X4 podium. Mike and Mark had both been on the podium separately in previous events, but this race marked the first time they were both on the box in the same race.

The Traxxas TORC Series continues in Joliet, IL for Rounds 9 and 10, August 25 and 26. You can watch all the action online via live streaming video at TORCseries.com, and be sure to program your DVR for the premier of the 26-episode Traxxas TORC Series TV series! Programming begins September 2 on Discovery Networks’ HD Theater channel, and continues for 26 weeks every Thursday night. Check your local listings for channel number and time information.