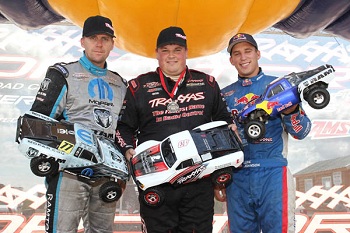 What a day in Bark River! Thousands of TORC fans filled the campgrounds, lined the hillside and rose to their feet in the stands as the sounds of short-course racing echoed across Michigan’s Upper Peninsula. With the exception of a brief rain shower, the weather was beautiful and comfortable all day. And the racing was incredible! Traxxas drivers CJ Greaves, Andrew Caddell, Jeff Kincaid, and Mike Jenkins thrilled the crowds and climbed the podium in the Super Buggy, Pro Light, Pro 2WD and Pro 4X4 classes. Here’s how it all went down…

Round 7 of TORC Pro 4X4 began as a battle between Rick Johnson (Red Bull/RAM) and Johnny Greaves (Monster/Toyota) with Mike and Mark Jenkins following with their Traxxas machines in third and fourth, followed by Scott Douglas (Amsoil) and Steve Barlow. The stage was set for another Mark Jenkins/Scott Douglas battle as Douglas closed the gap to Mark’s 25 truck, but a failed alternator ended Mark’s race before the combat could begin. Rick Johnson encountered troubles as well, his truck smoking badly at the mid-race restart. Mike Jenkins jumped on the opportunity and took the lead asGreaves also leapt into action in second place. Jenkins shut the door on Greaves from turn to turn, but Greaves found a way past at the “cemetery turn” and took over the top spot. The battle now was for second, as the infamously tough and talented Scott Douglas poured everything he had onto the track. From turn to turn, Douglas pushed and prodded but Jenkins stayed cool and held the 11-time champion at bay. Douglas made a final bid before the finish line nearly succeeded, but Jenkins was not to be denied and flew his no. 47 Traxxas truck over the finish line jump to take the second step on the podium.

Andrew Caddell took the holeshot and the win with his Traxxas truck, no looking back! Samuel Hubinette (Mopar/RAM) held firm to second place as Casey Currie gave chase in third. Driving in fourth place, Luke Johnson’s determination showed as he extracted everything he could from his Red Bull RAM as he hunted Curry. Johnson closed on Curry after the mid-race yellow and made a beautifully executed inside-outside pass to move into third. The Caddell/Hubinette/Johnson running order held to the finish, giving Johnson his first Pro Light podium finish and $1500 in Traxxas purse money. Hubinette scored the $2500 prize, and Caddell earned $5000 for the win, plus a $1000 “Maxx Lap” bonus for posting the fastest lap of the race.

CJ Greaves raced his Traxxas Super Buggy into third place at the start of Round 7’s race, behind Steve Krieman and Jeff Sleggers. Sleggers spun, allowing Greaves to move into second and set his sights on Kriemam. The seasoned buggy racers drove smooth and consistent lines, but as CJ tossed his last tear-off and began collecting dirt, he knew it was time to make a move on his rival. One lap beforte the mid-race yellow, Greaves made an outside pass on Krieman for the lead, and took it all the way to the finish after the restart. Krieman went on to finish third, after Larry Job passed for second place.
[nggallery id=373]