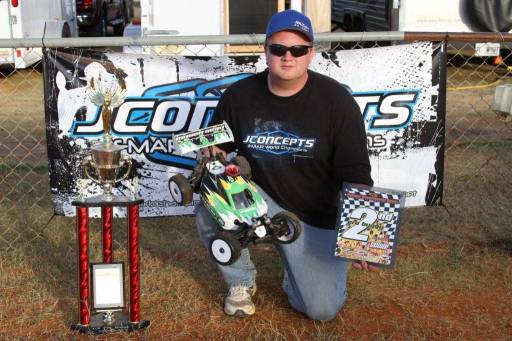 The Final round of the Georgia Championship Series was held at the legendary Phil Hurd Raceway in Savannah, Georgia. Excellent racers from all over Georgia were in attendance, including racers from South Carolina and North Carolina, made this event a very competitive race. The track was your typical Georgia clay and it quickly developed a wide blue groove providing excellent traction and close racing.

Qualifying in the 1/8 Pro Buggy class was very close between all the top drivers. JConcepts driver Tim Smith was able to secure 3rd place on the grid with two solid 2nd place qualifiers behind Chris Pace and Travis Dupree. JC driver Barry Pettit also put in a good qualifying result and started 5th.

The mains were run the following day and the track was getting better and better, and then the rain came. After about and hour and a half delay, racing resumed. The Pro buggy main was the third main following the rain and the water had washed much of the groove away so tire choice became extra critical. At the start of the A-main, Smith got caught in a first lap wreck and when it was all said and done, was near the back of the pack but managed to gain control and start turning consistent laps and slowly moving up to the front of the pack. Around the 21 minute mark, Smith was able to capture the 2nd place position behind Chris Pace and finish a respectable 2nd. Tim ran the green compound Subculture tire and it proved once again the answer to a solid finish.

With this being the final event of the GCS series, Tim Smith was able to hold onto his lead and capture the 2010 GCS title in the 1/8 Pro Buggy class ahead of Shane Ogden and Shannon Amos.