You might be asking yourself, “What is a ‘Doll House’ truck?” Before we dive into it, let’s look at the core meaning of it, which is all about being scale. Scale, as defined in the dictionary states: “a ratio representing the size of an illustration or reproduction, especially a map or a model, in relation to the object it represents”.

When it comes to scale RC there is lot of interpretation in regards to what is scale, especially when it comes to the competition side of things. This is where it can get tricky as people try to balance the aspect of performance while keeping the visual looks of their radio control model realistic and accurate to the full size (1:1) vehicle they are representing. 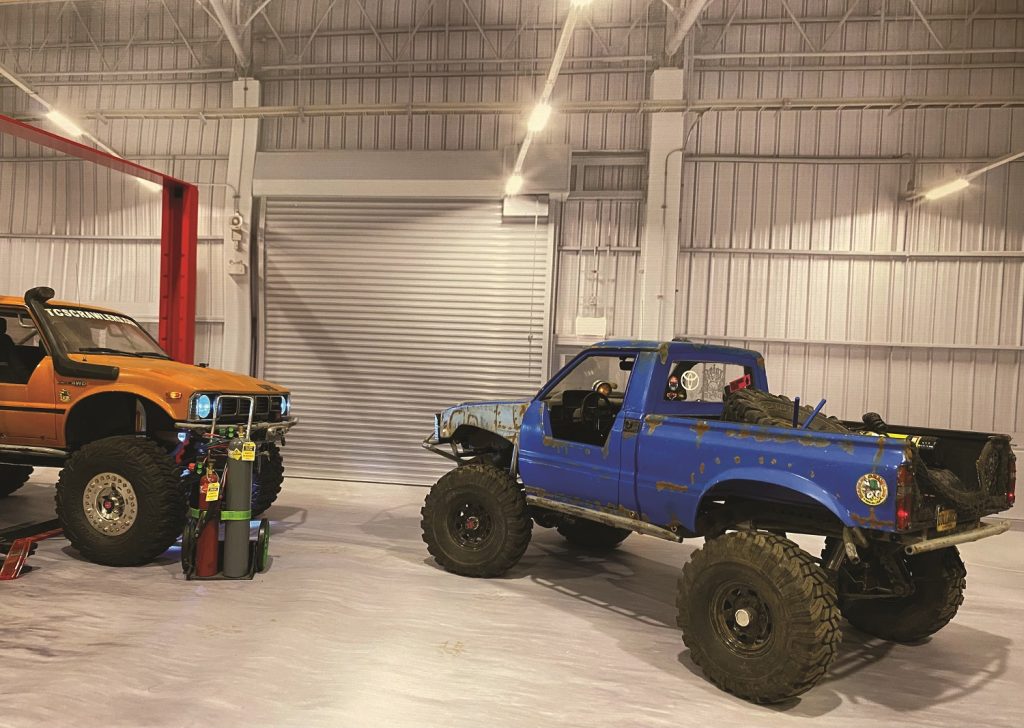 Two custom built Toyota “Doll House” rock crawlers sit in a scale garage/shop back drop made by Adam Vanord of Vanord Customs. Adam was actually the owner of the competition scale truck that had clear wheels. After much debate, we both saw eye to eye (as they say) and worked out our opinions for the betterment of the hobby.)

The term “doll house truck” was coined quite a few years back. It’s a bit of a funny story due to how it all came about. As some of you may know, I have been into the hobby for over 25 years now and my favorite part of it has always been on the model building side. Even at the young age of 10 I was tricking out my Tamiya Clod Busters with scale parts from APM Custom Hobby such as air horns and roll bars with working off road lights. Needless to say sometimes my passion for it gets the best of me and when I saw a re-cap of “scale comp” and there was a truck competing with “clear wheels,” one might say I bugged out… “Real rock crawlers don’t have clear wheels! This is blasphemy!” It sparked a call out to the sanctioning body for scale comp rules (SORRCA) to amend the rules to make the trucks look more realistic. I was then called out by competitors who insisted that the point of competitions is just that… to compete and that my “Doll House, shelf queen” trucks, wouldn’t stand a chance in competing against their trucks.

The truth is, they weren’t wrong…but neither was I… the issue is the interpretation. My interpretation of a scale RC is that it should look as realistic as possible whereas in their case they were merely building within the scale rules they were governed to. In the end, both sides prevailed. As we all took a breath, we realized this hobby is supposed to be about fun and making new friends and we collectively discussed it and worked it out for the betterment of the hobby. However, the term “doll house” truck continues to live on and isn’t necessarily a bad thing anymore, but a term used to describe the utmost scale RCs being built.

What makes a scale RC a “Doll House” RC

Much like an actual doll house, what makes a Scale RC vehicle fall into the “Doll House” category is all of the details. In a nutshell, you want the most details you can possibly cram into it while still making it radio control. This can become rather difficult when it comes time to squeeze in batteries and other electronics and sometimes some details have to be sacrificed in order for it to still be RC rather than just a static model. Let’s explore some of these details.

On my old “Blue Lux,” I chopped off the driver’s side fender and scratch built the inner structure of the cab, out of .030 styrene, that the fender would normally be bolted too. I went even further with the details and left the parking light bulb hanging out of the structure. It’s a small incandescent bulb known as a “rice” light for its small shape resembling a grain of rice. Proper lighting is key when building a Doll House truck. With LEDs being extremely popular and long lasting with great light emitting qualities it’s not always what you want when doing an older truck build as older vehicles didn’t come with LED lighting from the factory. 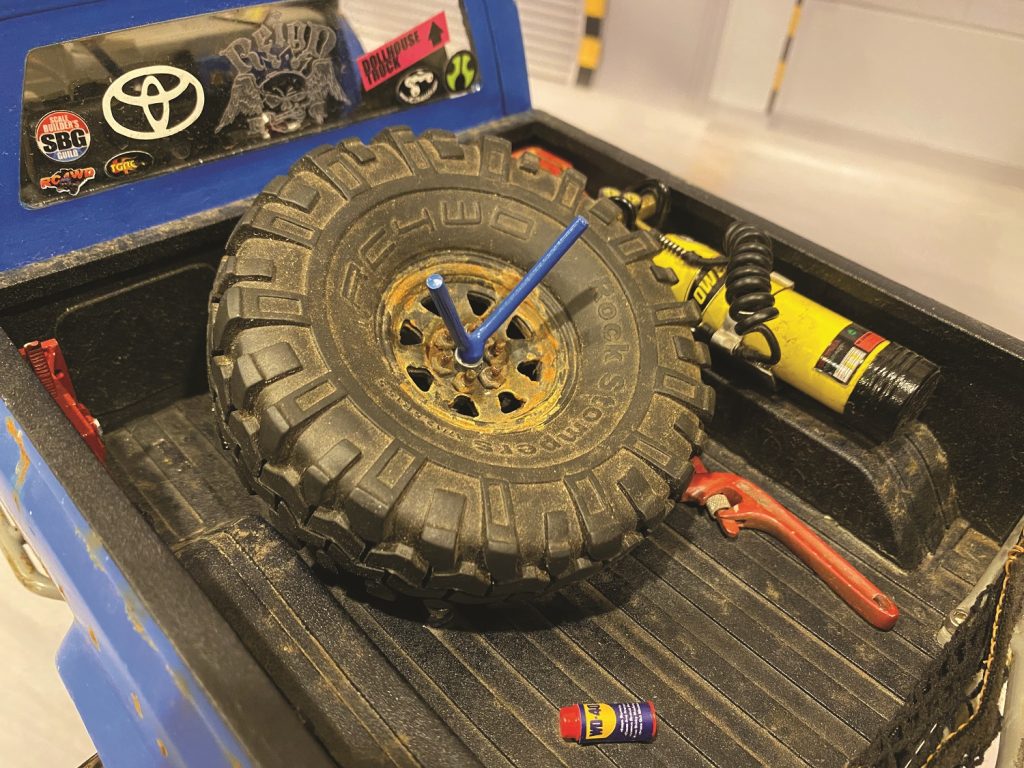 This Ryft is equippped with
aftermarket parts from Treal,
Reefs RC and Pro-Line. 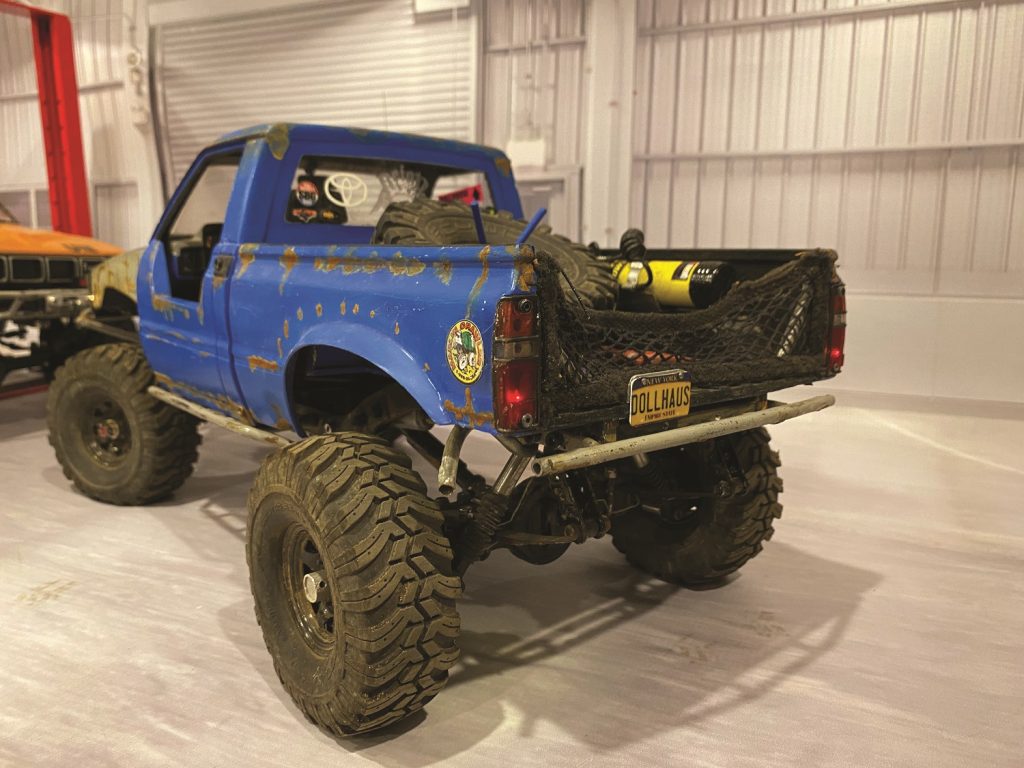 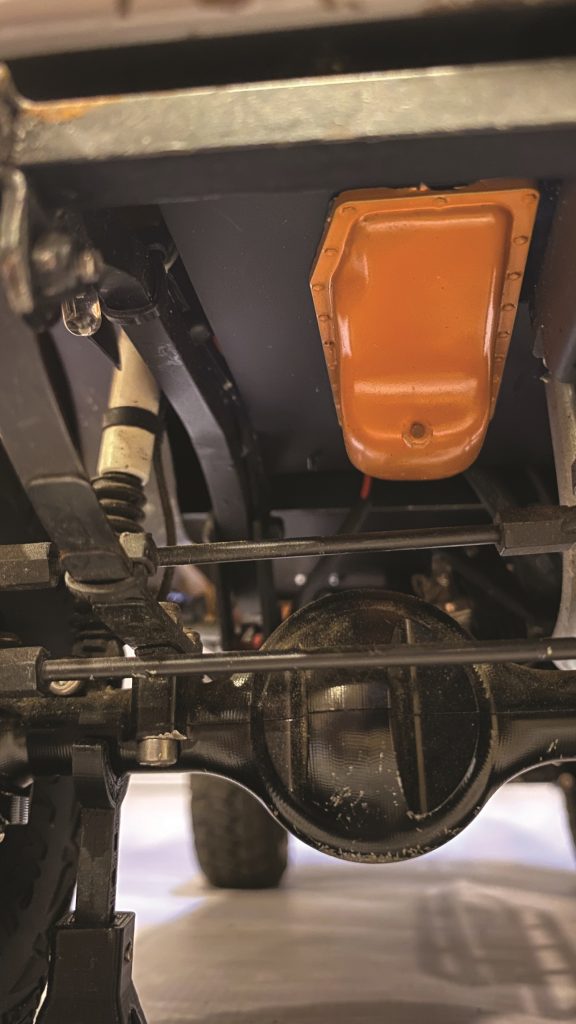 An oil pan is a simple underneath detail that be added via 3D printing or styrene scratch building.) 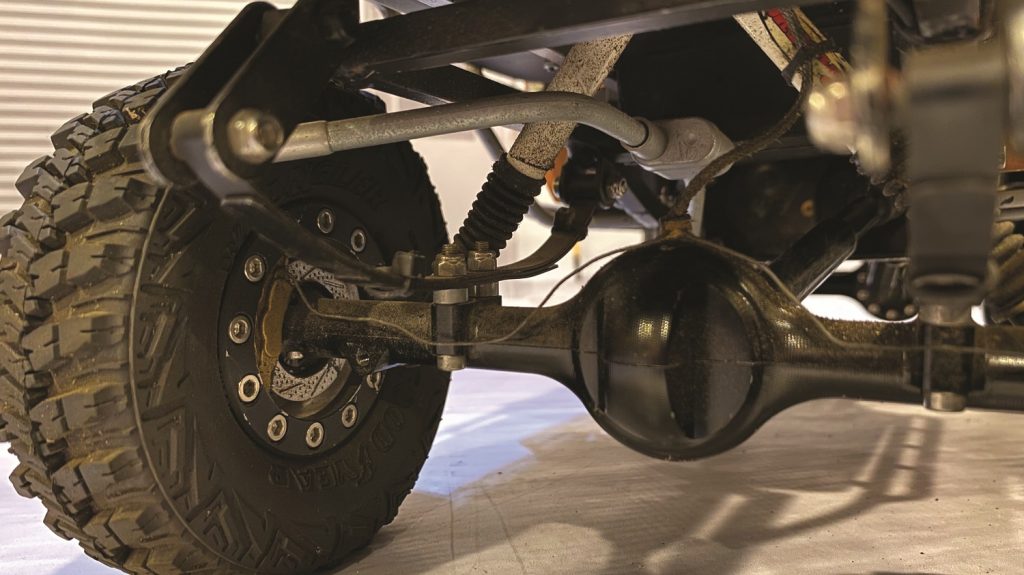 The Blue Lux received a healthy dose of weathering, especially in the known to rust areas, which on an old Toyota is just about everywhere. Sophisticated Finishes makes a two-part, paint and solution kit, which provides actual real rust, which can be added to any surface on the model. The blue base paint was also hit with Scotch Bright to eliminate the shine and rubbed a bit harder in some spots to go along with the paint fade and the rust.

This truck received a “bobbed bed” which is the process where you shorten the bed of the truck to get a better departure angle and not risk dragging the bed on steep climbs. It also received a “half door” modification too, a popular mod in the full size 4WD community which allows for the driver to see easier out of the truck. This is a great mod in RC as it allows a better view into the interior of the truck as well.

A proper “drop bed” or the idea of giving the bed area the full depth look of a full size vehicle is another great Doll House tactic. Using some spray bed liner from the auto parts store completes the look nicely. Having the bed accurately “dropped,” allows for the proper addition of scale accessories to be added in a more realistic manner. Popular accessories include a full size spare, Power Tank compressed air tank, Hi-Lift jack and more.

Not to be overlooked, the underside of your scale truck is just as important as the top side. When taking photos of your scale truck on the trails it’s not uncommon to have to get low and level with the truck on the ground. Doing so will be sure to expose the underside of your truck and in keeping all things Doll House, you’ll be sure to want to add some detail work underneath. Things like brake lines, brake rotors, exhaust and the like are all great accessories to add. Although they’re underneath the truck, these details are visible and when added can really step up your realism game. 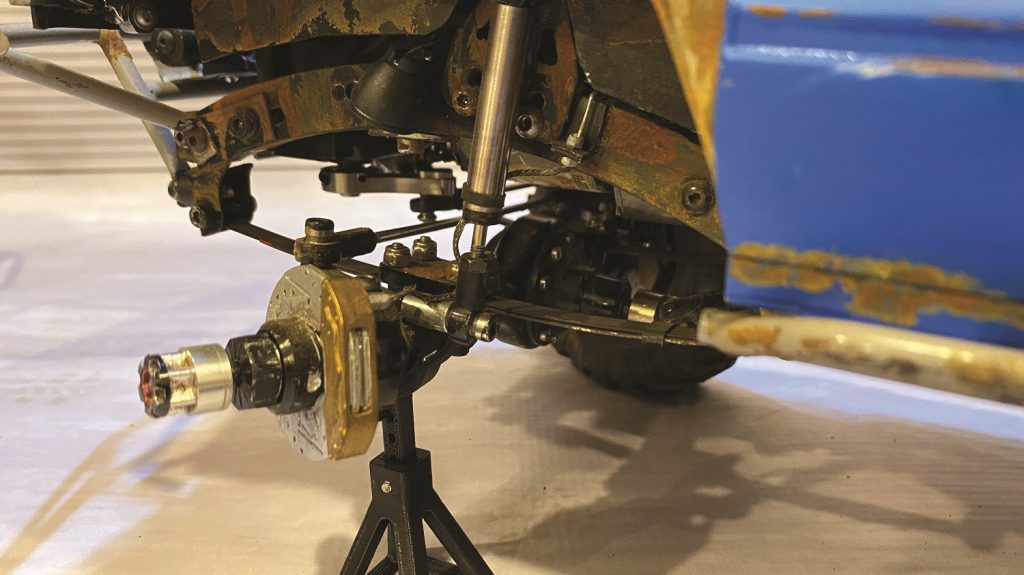 The Blue Lux received front brake rotors, calipers, braided flex lie and even the hardline on the chassis was constructed to give the look of a full accurate brake system.) 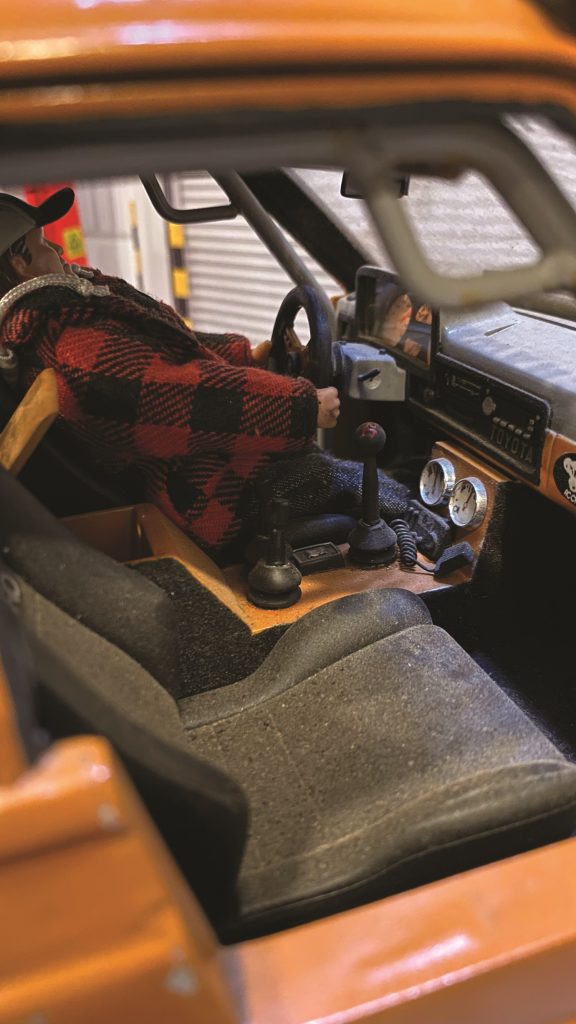 On the back of my truck, I constructed “drum brakes” using soda bottle caps. The ribs on the caps give them a realistic drum brake look. The “drum” is bolted to the wheel and spins, while a back plate was scratch built and glued to the axle housing. The back plate remains fixed while the drum rotates around like real thing. I detailed my “back plate” by adding the “spring hold down pins,” a bleeder for wheel cylinders and even the little slot for the star adjuster was done too.

Something cool I did on my “Atomic Toy” replica was add an oil pan. I didn’t have the space for a full-scale driveline but the oil pan gives the illusion of the truck having an engine out on the trail from the underside. Rear disc brakes, an exhaust, shocks with shock boots are also all great Doll House details to be added.

My favorite part of Doll House truck building is the interior of the vehicle. There is a lot you can do here! Roll cages, opening consoles, shifters, pedals, lighted gauges and more. The interior has an infinite amount of detail and realism you can add.

If there is one example I can think of that demonstrates a scale engine and engine bay it’s on this 1957 Chevy Belair built by the late Tim Minor. Much like the interior, the engine and engine bay has tons of room for detail work. From spark plug wires, to brake master cylinders you can accurately replicate many of full size vehicle parts that are under the hood. 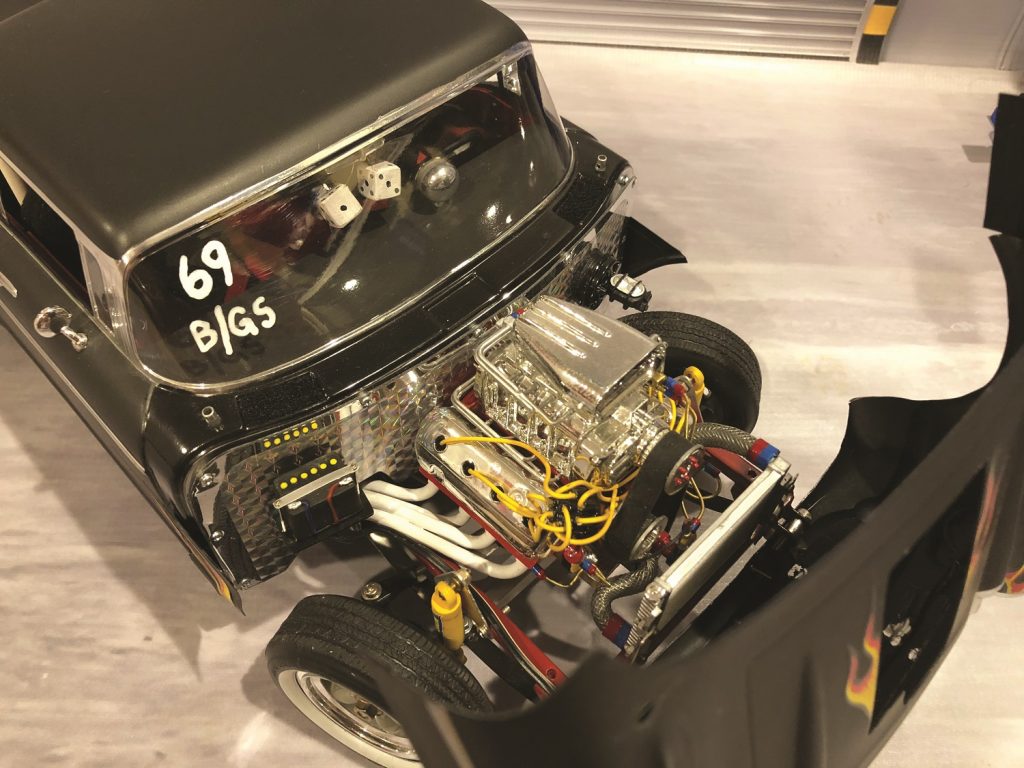 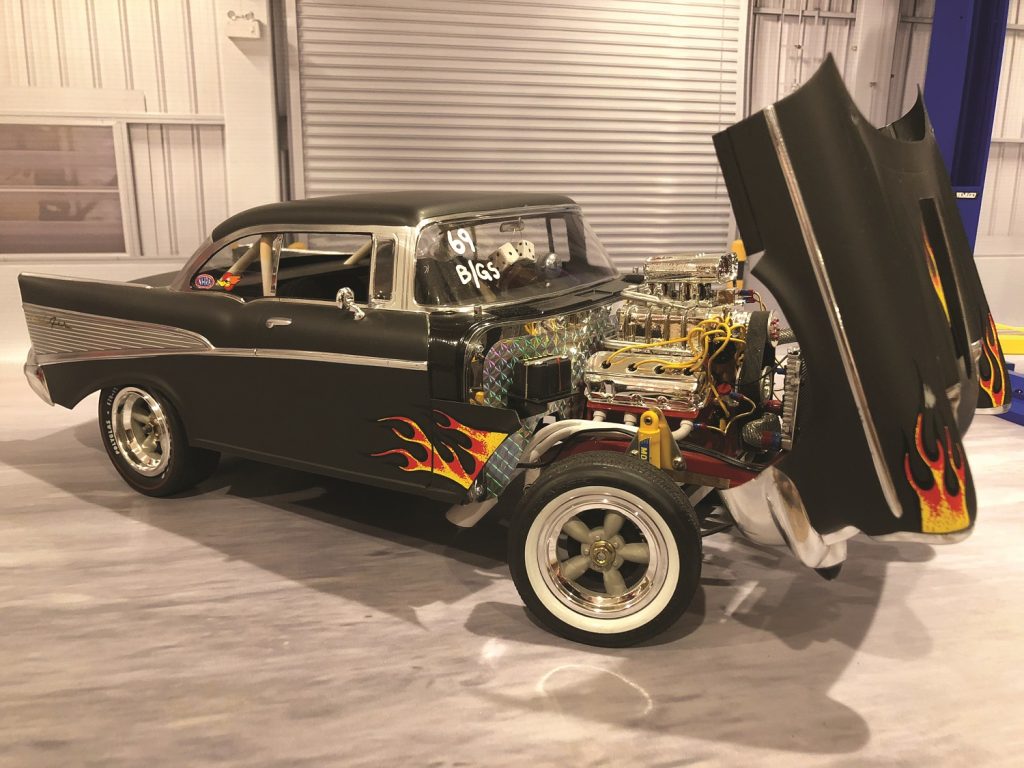 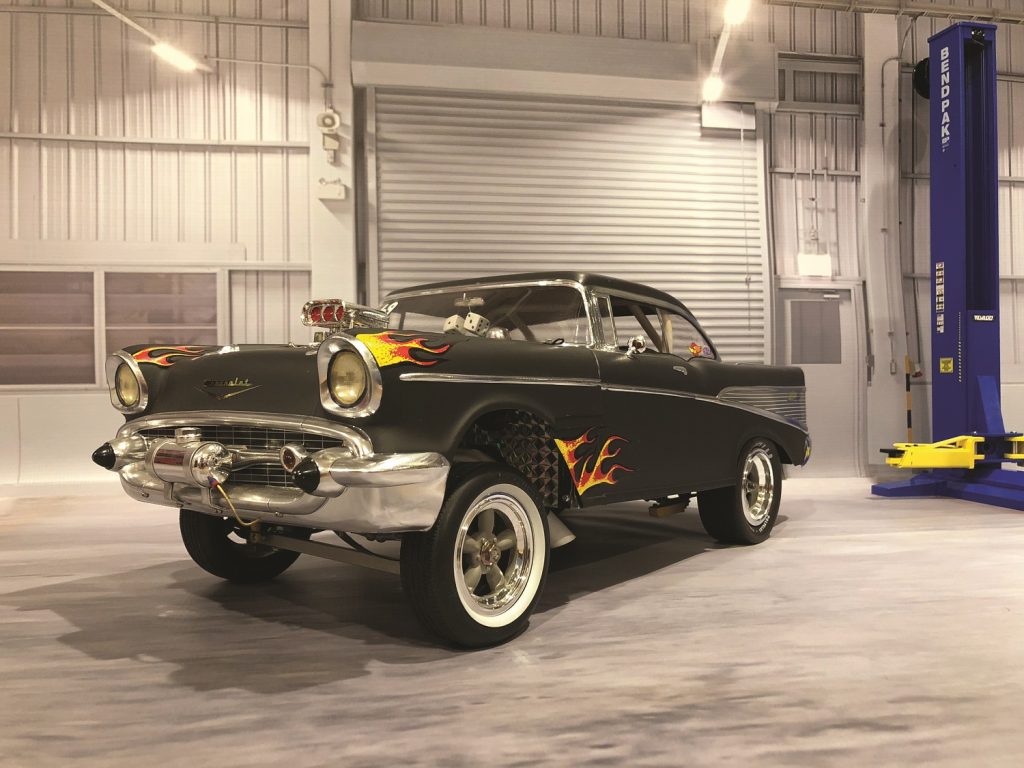 Doll House trucks are all about realism. From accurate paint and weathering, to different scale accessories that us full-size 4-wheelers carry; this is what makes up the meat and potatoes of a Doll House truck in comparison to your average scale RC truck. There is a lot more than solid axles and a ladder style chassis to make a scale truck or car a Doll House one.

Your best place to go for ideas could be your driveway, pop the hood on that car or truck and see where the battery is located! For me, I’ve been fortunate to have been a full-size car enthusiast for the better part of 25 years now and have had plenty of four-wheeling trucks and drag race cars so I get a lot of inspiration from my own vehicles. But scale is everywhere, you just have to look around and use your imagination on how to replicate it. Till next time, see you on the trails!