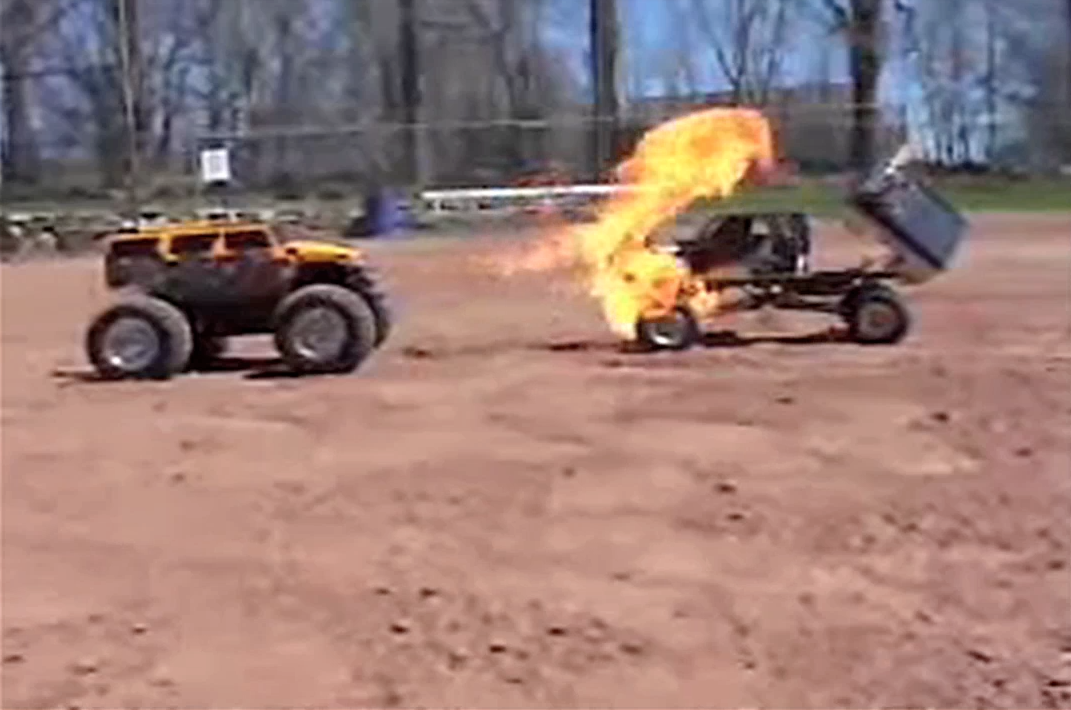 A while back we had run into a guy who built an awesome E-Maxx that had a flame thrower built into it and we couldn’t get the truck to our office fast enough. We featured it in our 2005 Monster Trucks special issue. We wanted to set up a cool shot where the truck was lighting something on fire instead of just showing how big the flame was and an RC car was the perfect choice. Now, this is where things went wrong. A while back I had build a custom crew cab pickup truck and it was featured in the April 1998 issue of RC Car Action. The years weren’t too kind on my custom scale rig and it was showing signs of wear, falling apart and the paint had seen better days. My detailing and building skills had greatly improved during the years after that build and I was ready to retire that scale truck. So that meant taking it apart to use the axles and maybe 4-link bars for another project and ditching the rest because it was simply too far gone to do anything with it and not up to the standards of what I was capable of building at the time. So that scale truck was the perfect choice to get torched for our video and photos in the flame throwing E-Maxx article. After the release of that video I was slammed on many RC forums for burning a “Tamiya Bruiser” which is a very rare and sought after truck.  Even today, I still see that being brought up on different websites and it has come up from time to time when I am at events. Well, the thing is that all the talk on all those forums is completely wrong and I’d like to clear some things up when it comes to the “Bruiser” that I burned.

Everyone is all over me for burning a “Bruiser”.

This truck was in no way shape or form a Bruiser; not even close. It wasn’t even based on a Bruiser. The only Bruiser parts on the truck were the axles. I used two front axles so that the truck could have four wheel steering. Does that make the truck a Bruiser? I say no but some say it does. If it does, then why aren’t people calling it a Clodbuster? It used a Clodbuster body.

I’ve been told that the axles are warped and no longer useable due to the heat of the fire.

Well, I actually put the fire out before it got past the chassis. Now I’m sure the top of the axle housings were a little warm while things were burning but there was never enough heat to warp the metal. To this day I have those axles in my basement and they are perfectly straight. No matter how many times I’ve said that to people on the forums that were bashing me, there were people who told me that I was wrong. How can that be? They weren’t there and don’t have access to the axles to check that out for themselves.

Some were mad that I burned a Clodbuster body that had the Chevy logos on it.

At a point in time Tamiya stopped putting the Chevy logos on the Clodbuster body and somehow that made the ones that had them more valuable. Of course people were all kinds of upset that one was burning. I guess the fact that I cut the thing up and modified the living daylights out of it was ok. It wasn’t even close to being like the body that I started with by the time I was done. But was it even the version with the Chevy logos? No, it wasn’t. Look at the grill. Is there a bowtie there? I’m good but not good enough to sand it off and rechrome the grill. There’s also nothing on the tailgate.

So what is it about the people who are all upset about the burning of this truck? Most of them blurt out stuff that isn’t true and won’t give up the fight no matter what. I’m glad that a lot of people liked that truck but no one saw what it really looked like before we torched it. Trust me, what you see in the video and in photos didn’t show the real condition of the truck.