The second generation Chevrolet Blazer is probably one of the most iconic SUVs to have ever hit the streets and off-road trails. Based on the full-size Chevy C/K series of trucks, this second-gen Blazer was so popular that it was continually in production for nearly 20 years. Now that’s saying something. Not many vehicles nowadays can boast such a long production run.

But as they say, all good things must come to an end, and the second generation Blazer, which was first built in 1973, made way for the next generation of the SUV in 1991. Although its been out of production for over three decades, its classic looks and renowned capability have allowed it to cross over from being an outdated model by today’s standards into a highly sought-after SUV for collectors, enthusiasts and resto-modders.

Like many Chevy and classic truck fans, RC4WD lamented the end of the second-gen Blazer line and set out to do something about it. The RC brand that is well-known for its authentic and detailed models has brought the Blazer production lines back to life, this time in 1/10 scale. RC4WD captures the unique and well-loved look of the ’80s-era Blazer and marries it with the company’s proven Trail Finder 2 platform.

This officially licensed Chevrolet Blazer is a highly detailed RC vehicle that’s as detailed as any on the market and, in many ways, exceeds the realism of those that have come before it. RC4WD’s replica of this beloved SUV comes already built and ready to run (RTR). The version we had the pleasure or reviewing for this article is a edition that RC4WD calls the Rust Bucket. 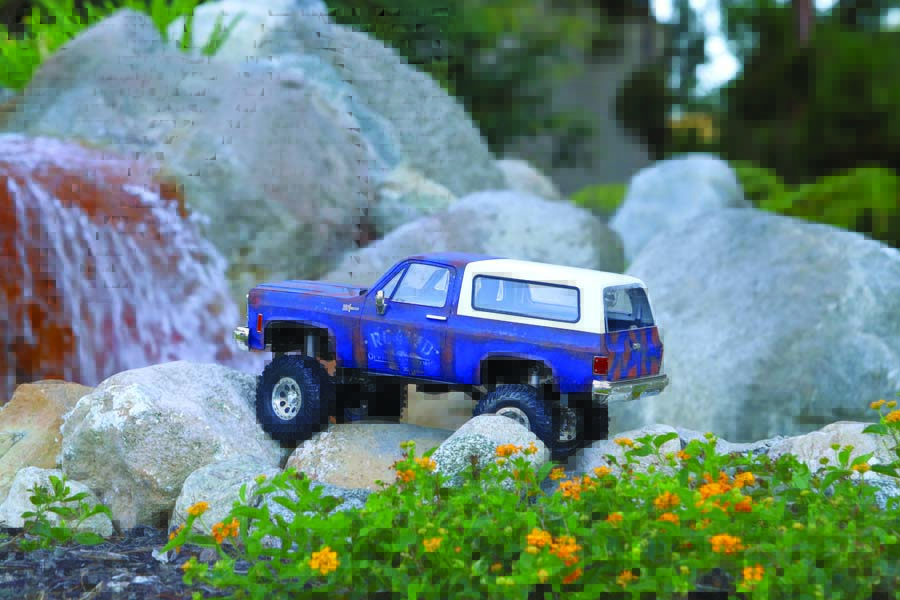 RC4WD is very particular about the bodies that they produce, and it shows. The brand’s attention to detail is incredible. This Blazer features a hard plastic body that features accurately molded and plated scale details including mirrors, door handles and grille to look like its full-size counterpart. RC4WD’s designers faithfully captured the body’s crisp lines and bold details.
For those who love the look of a well-worn and patina’d truck but may not have the courage or skill to paint one up, this RC is perfect for you. The Rust Bucket Edition Blazer features a custom body that’s pre-painted to reproduce a weathered rust effect. To add to the overall look, a custom weathered RC4WD Off-Road Customs design is applied to both doors.

The details don’t stop there. Unlike most 1/10-scale RC vehicles, you’ll find that the Blazer comes with a detailed interior complete with realistic seats, dashboard and center console. Even the hood opens and reveals the SUV’s inner workings in a cavernous space that would allow for the addition of engine bay details if you’re so inclined. What’s more, the Blazer body includes a dismountable roof. That’s right, you can easy change the SUV’s look by mounting or dismounting the roof. There are many chrome-plated parts, as well as clear colored lenses for all signal lights. All of the truck’s lamps can be illuminated if you decided to install LED lighting. 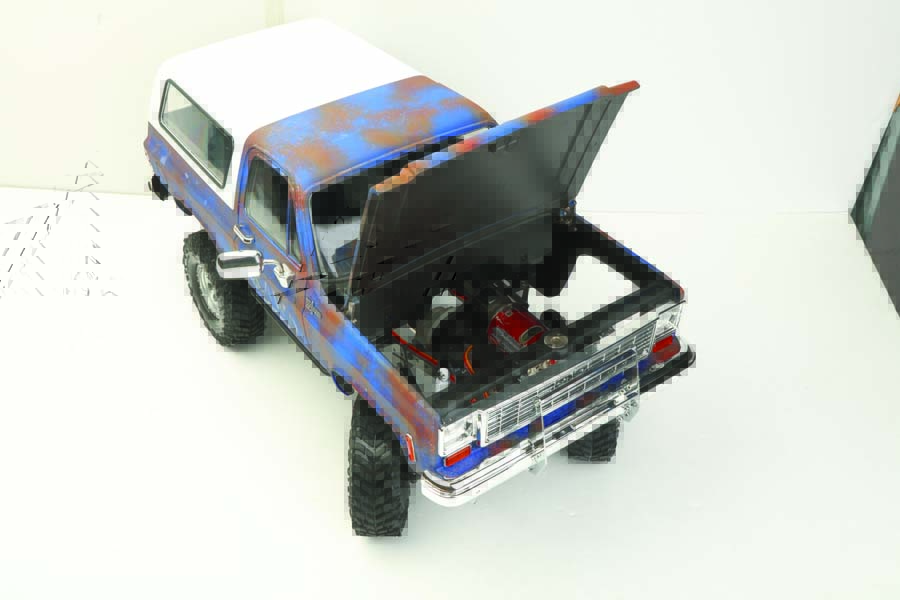 The Blazer’s hood opens and reveals the TF2’s inner workings. The hood’s opening mechanism is similar to that of the real Blazer.

RC4WD’s Trail Finder 2 (TF2) platform has been a favorite of RC crawler enthusiasts for quite some time now and it’s for good reason. It is engineered for realism, from its machined billet aluminum ladder frame chassis and leaf spring suspension to its molded fuel cell that doubles as an electronics storage box. It also features an aluminum, frame-mounted, under-cab electronics tray for multiple electronics mounting options.

If there’s one theme you should be picking up on by now, it’s that RC4WD is all about realistic details. This covers everything they produce, even down to the wheels and tires. The Rust Bucket Blazer comes with RC4WD’s CNC machined Mickey Thompson Classic Lock 1.9” internal beadlock wheels, which also include Mickey Thompson Classic Lock caps. The wheels are mounted with Mickey Thompson 1.9” Baja Claw 4.19” scale tires. These tires are made of RC4WD’s super-soft, super-sticky X2 SS compound and come standard with molded sidewall details. These scale tires are as real as it gets. 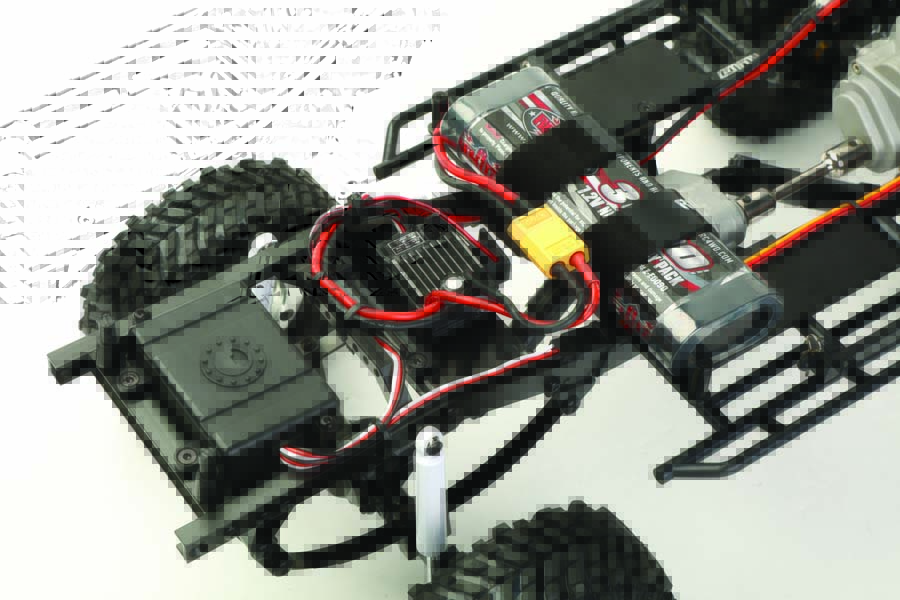 A neat electronics layout keeps the rig balanced. Note the molded fuel cell that doubles as an electronics storage box. 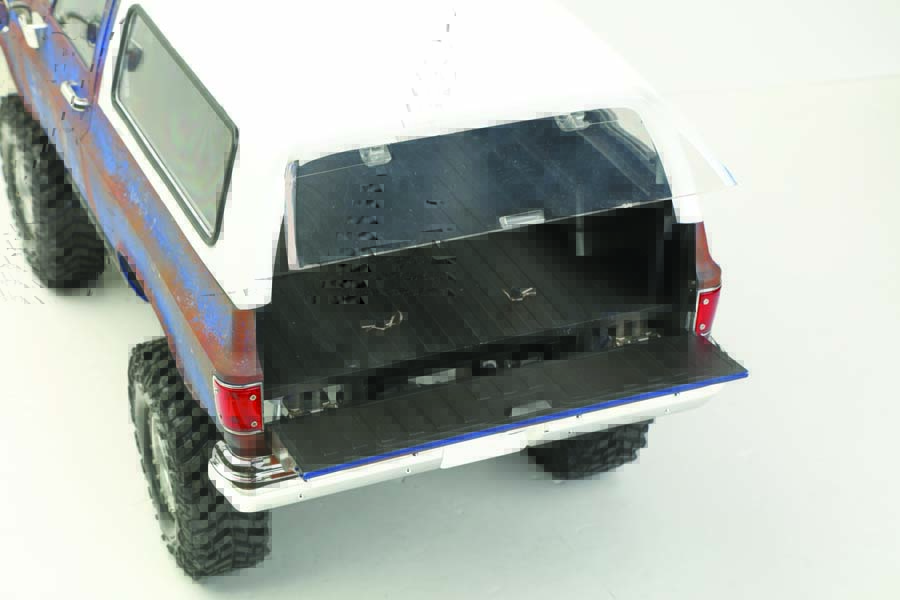 The detailed hard body’s tailgate and rear window can both be opened. 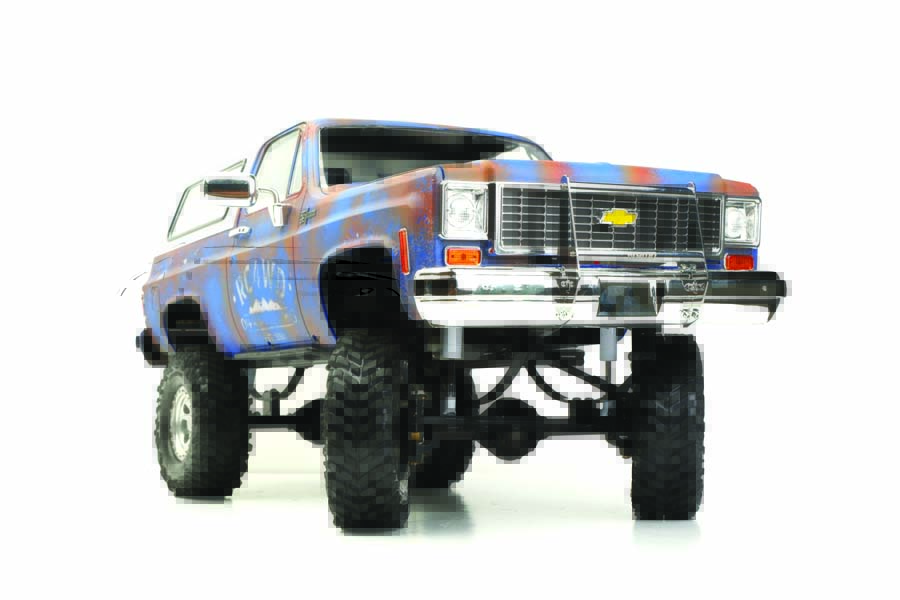 “RC4WD is very particular about the bodies they produce, The brand’s attention to detail is incredible.”

Driving the TF2 is a proven collection of driveline components, including RC4WD’s R3 scale single-speed transmission. This transmission is outfitted with wide steel gears, a Delrin spur and a slipper clutch for dependable drive characteristics. You’ll also find a K44 Ultimate Scale Cast axles and a Hammer transfer case that contains eight bearings, a cast casing and hardened gears. Powering the Rust Bucket is a 540 Crawler 45T brushed motor mated to an Outcry III waterproof ESC, and steering is handled by a Twister high-torque metal gear digital servo. Each of these components serves the ready-to-run Rust Bucket well.

As mentioned before, the Rust Bucket Edition of the Blazer is an RTR kit, which means it comes pre-built and ready to run. What’s even better about this kit is that it also comes with a vehicle battery and charger, which isn’t always the case with RTR kits. An RC4WD 6-Cell 30000mAh NiMH battery pack and RC4WD Universal NiMH peak battery charger come standard. All you need to provide are the AA batteries for its XR3 3-Channel 2.4GHz transmitter. 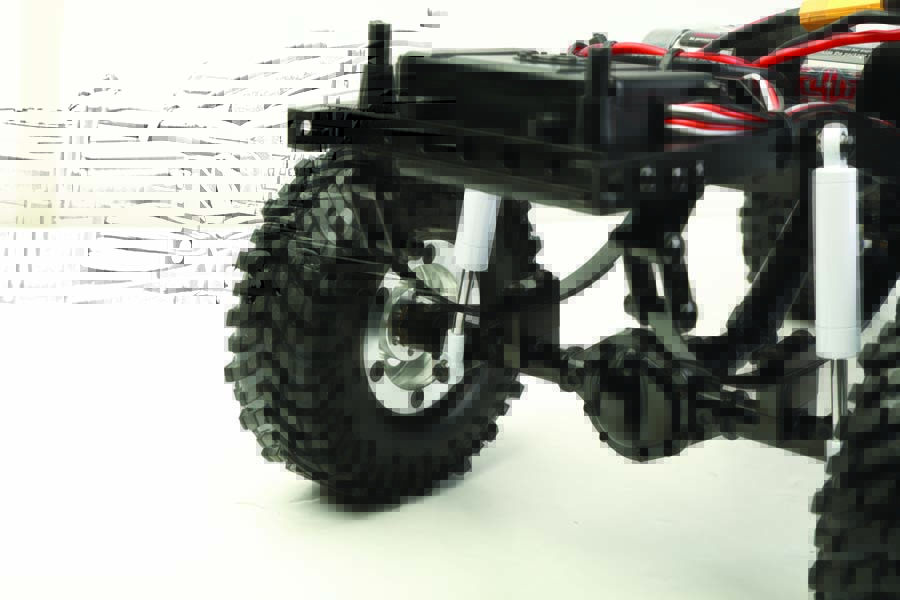 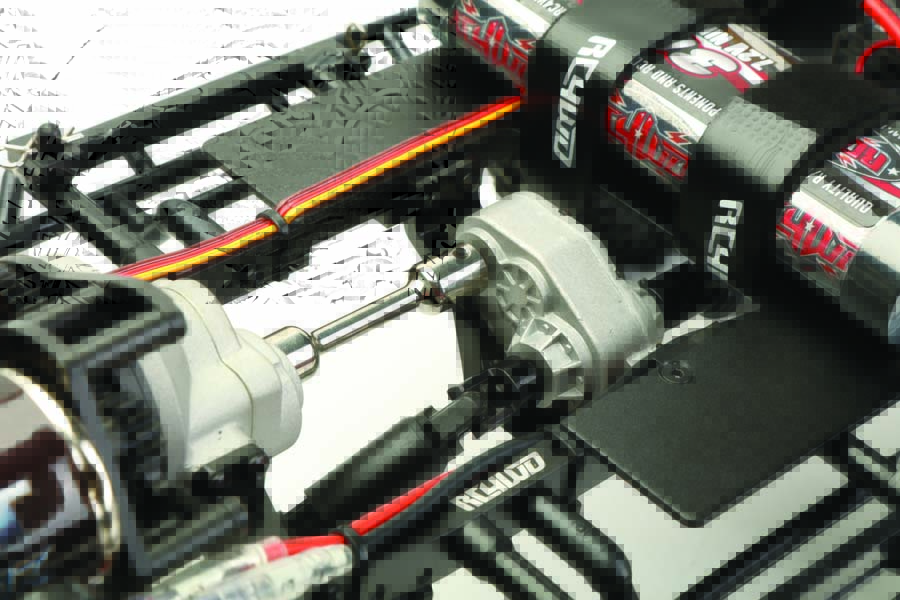 We headed out to the trails to see how the Rust Bucket drives. One there, we placed it on the trail and took a step back to admire its detailed looks. It simply looks great out in the wild. We installed the included RC4WD 30000mAh NiMH battery and powered the Blazer up for a trail run.
We drove over both rocky and soft dirt terrain without issue. The classic SUV looked realistic as it crawled over obstacles. Even simply sitting on the trail with a light layer of dust on it made it a pleasure to look at. The Blazer’s four-wheel drive system took on steep inclines without issue, but we’d say there is a trade-off to the great look and realism that a hard plastic body gives you. It makes the truck a bit top heavy. We’re sure that this can be remedied by swapping out some parts under the truck’s beltline with heavier brass parts or placing weights in the vehicle. 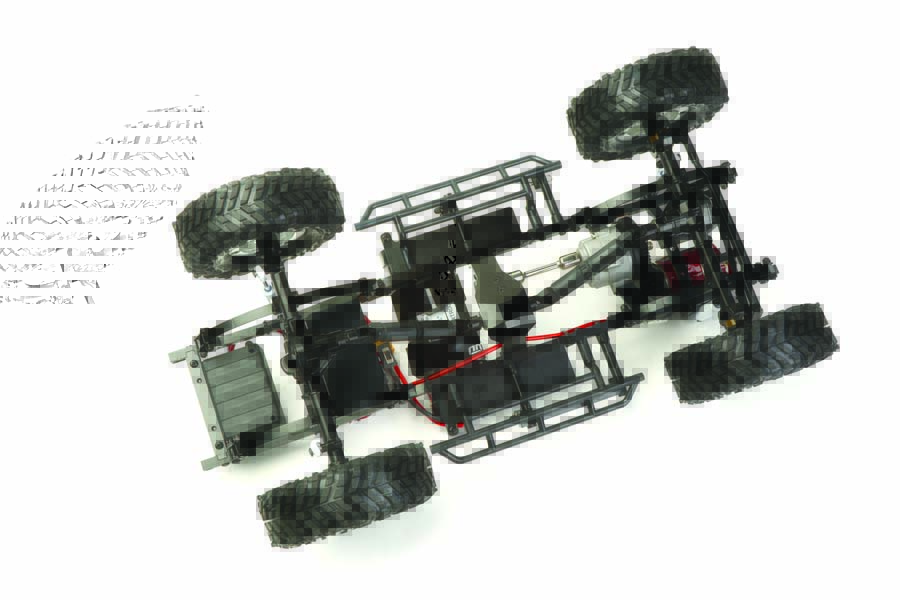 A look underneath the TF2 in all its glory. 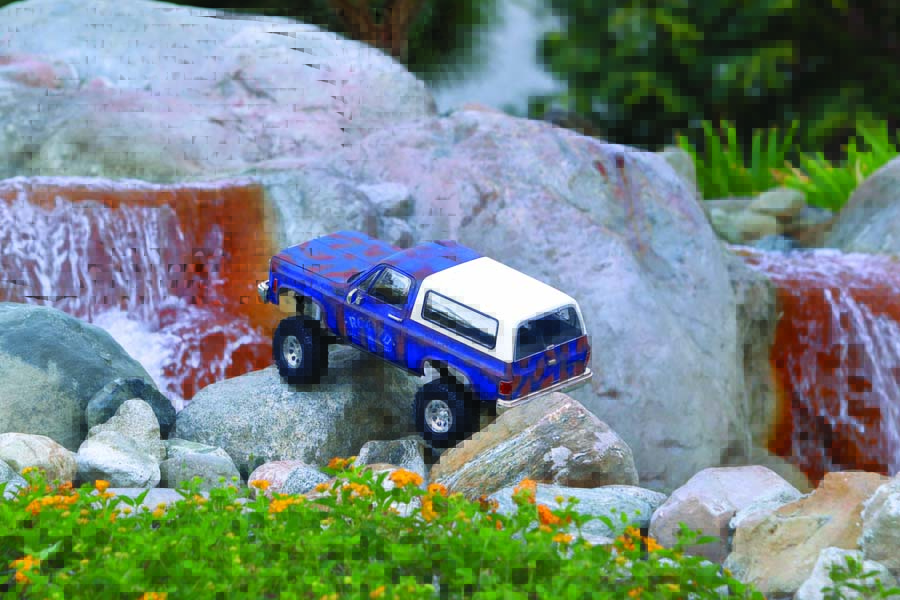 “The classic SUV looked realistic as it crawled over obstacles.”

There are enthusiasts who are all about crawling performance and those who mainly care about scale realism. We’d say that the TF2 Blazer is geared more for those who value scale realism over outright crawling performance. The Rust Bucket Edition of RC4WD’s TF2 Blazer is a stunning RC vehicle for sure, especially with the custom-looking patina paint job. That’s not to say that with the proper mods this rig wouldn’t be able to hang with all-go, no-show crawlers; it’ll compete and look much better doing it too.