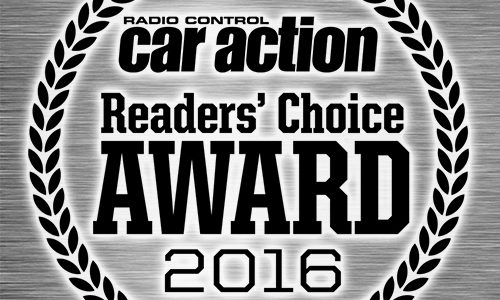 ELECTRIC ON-ROAD
Traxxas XO-1
This category was once the domain of whatever hot competition tourer was hitting stores, until the XO-1 made a 100mph drive-by to take the award in 2012. “The world’s fastest ready-to-race RC car” has picked up the trophy every year since, and no challengers have stepped up to beat it for top-speed supremacy. Literally and metaphorically, the XO-1 shows no sign of slowing down—Traxxas has updated it with the latest Traxxas Stability Management (TSM) technology, and it piled up the votes as your top pavement-pounding pick. 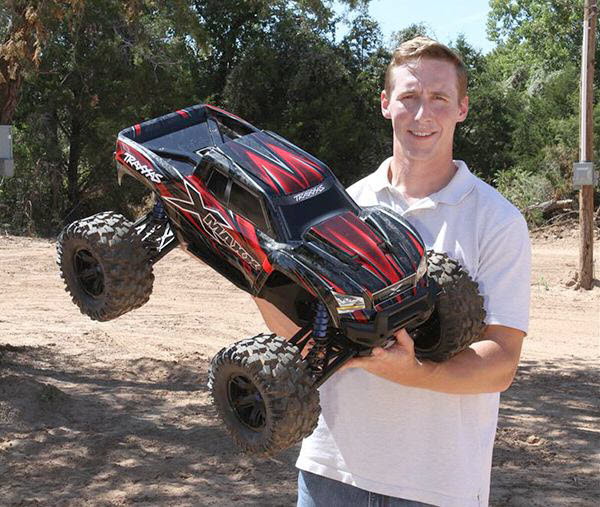 ELECTRIC TRUCK
Traxxas X-Maxx
Traxxas has had the electric truck category locked down since 2009— first with the E-Revo, then the Slash and Slash 4X4. Now it’s the X-Maxx’s time, and the big rig scores the Readers’ Choice Award to go alongside its Truck of the Year trophy. What’s next for X-Maxx? Expect hop-up parts and aftermarket lovin’, but most folks would be happy just to see more X-Maxxes on the shelves—as we go to press, Traxxas is sold out! 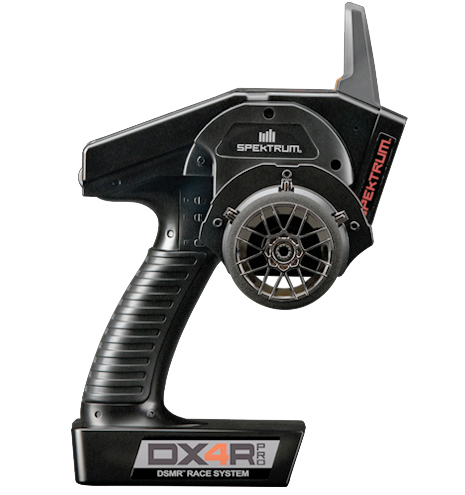 TRANSMITTER
Spektrum DX4R Pro
Pre-Spektrum, every radio had a set of crystals and a fishing-pole antenna. Remember those? No more; Spektrum changed the RC world forever when it introduced its first 2.4GHz radio system and took over the Readers’ Choice Transmitter category in 2008. The latest Spektrum pistol has earned the transmitter trophy every year since, and this year marks the third consecutive win for the DX4R Pro. But don’t expect to see it return for next year’s awards—the new DX6R was also a top vote-getter, and it’s not even out yet! 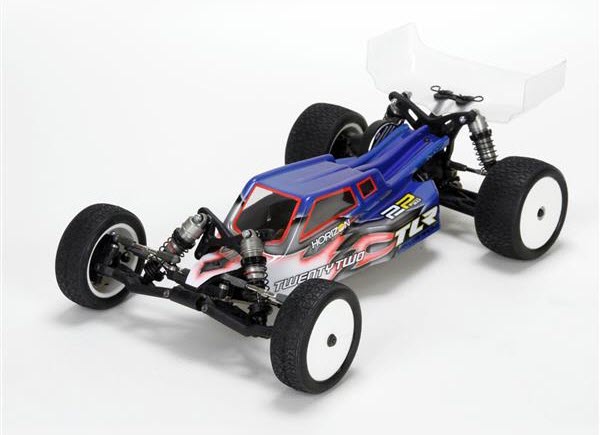 ELECTRIC BUGGY
TLR 22 3.0
The TLR crew is definitely having a good year. First the 22 3.0 scored the Car of the Year award from the editors, and now it’s got the big thumbs-up from you, the readers of RC Car Action (that’s the award that really counts). The Reader’ Choice hardware will look good in the TLR trophy case, but a race car is truly a success when it gets the job done on the track, and the 22 3.0 is definitely scoring there—just ask team drivers Ryan Maifield, Dakotah Phend, and Dustin Evans, or take a look at who’s running up front on the local scene. 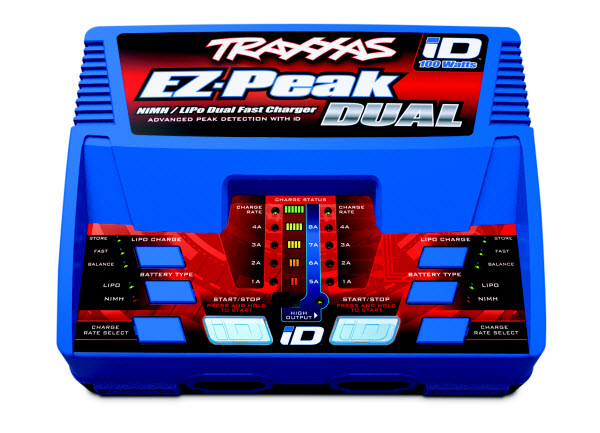 CHARGER
Traxxas EZ-Peak Dual iD
We named Traxxas’ iD technology our Innovation of the Year for 2015, and you must have agreed with our choice—after all, you backed it up with your “best charger” vote. The dual-battery EZ-Peak Dual iD racked up the most votes, and we get it—you want to get out and run your rides, not program your charger. The innovative tech makes charging Traxxas iD NiMH and LiPo packs hassle-free, even when you charge them together. The iD system automatically sets battery type and amp rate, so all you do is hit the Start button. You don’t even need to plug in a balance plug—it’s built into the main charging ports. 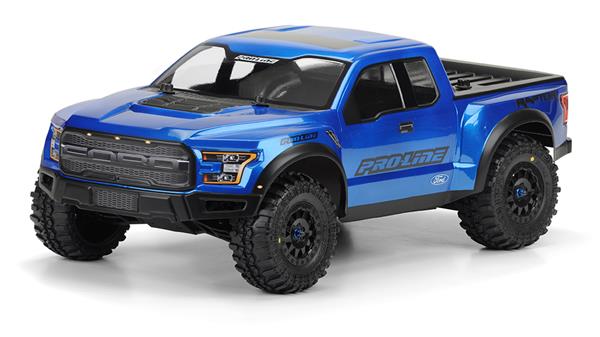 BODY
Pro-Line Ford F-150 Raptor
Pro-Line crushes the body category every year, with votes for everything from race buggies and monster machines to scalers and stadium trucks. That usually makes it pretty hard to figure which single body rises to the top as your favorite Pro-Line shell, but this year it was easy to see that the Ford F-150 Raptor was the Lexan that got the most love. Pro-Line offers the signature tough-truck look in versions for the Axial Yeti, Traxxas Stampede, PRO-MT, 1/8-scale monsters, and the short-course version shown here. 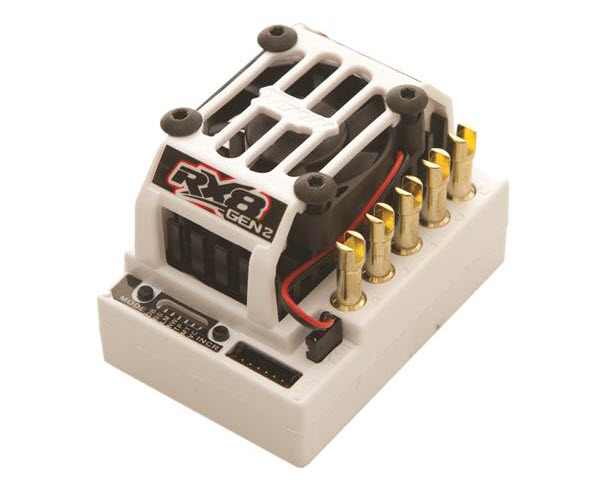 SPEED CONTROL
Tekin RX8 Gen2
That’s four in a row for Tekin’s RX8 Gen2! It was hardly Tekin’s only vote-getter, with plenty of you praising Tekin’s 1/10-scale race and crawling combos, but you voted in the biggest numbers for the great white wonder that is the RX8 Gen2. Its easy interface makes it simple to dial in without a programmer, or you can add HotWire and dial it in via PC or smartphone. Pro features and big-time power capability make the RX8 a top choice for monsters, 4X4 SCTs, truggies, and anything else big, heavy, and fast. 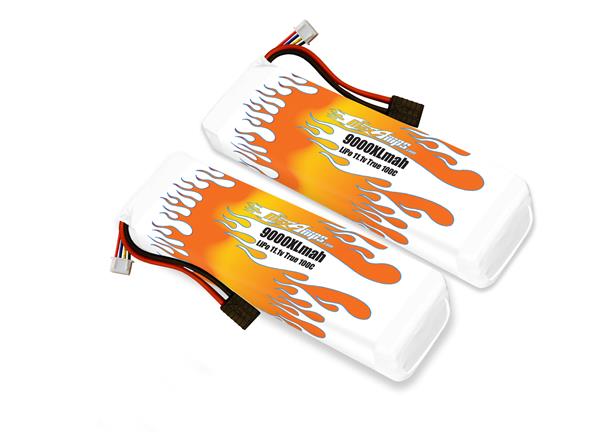 BATTERY
MaxAmps 9000XL
You don’t have to look far to find a decent LiPo pack—practically every RC brand offers a LiPo battery these days. So it definitely stands out when you readers pick one brand as your favorite battery year after year, and that’s MaxAmps. These guys make packs for everything, but based on the voting, many of you are turning to MaxAmps for your big-volt needs, as many singled out the super-sized 9000mAh “XL” pack combo as your choice. It makes sense since your top-truck pick is the X-Maxx, a dual-battery monster. 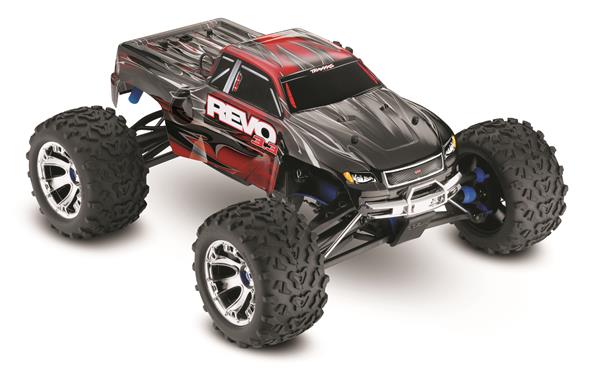 NITRO TRUCK
Traxxas Revo 3.3
Incredibly, only one brand has ever won the Nitro Truck category, and that’s Traxxas. When we added the category in 2001, the award went to the T-Maxx four years in a row, and has been won by the Revo every year thereafter—first with the 2.5 engine and now 11 straight years for the TRX 3.3-powered model (more on that engine later). Originally a racier take on the monster truck profile, the current Revo 3.3 is pure high-riding monster and loaded with every fun-running feature Traxxas offers, including a reversing transmission, rechargeable batteries for the onboard electric engine starter and radio gear, a full suite of telemetry sensors, and a Bluetooth-ready transmitter. 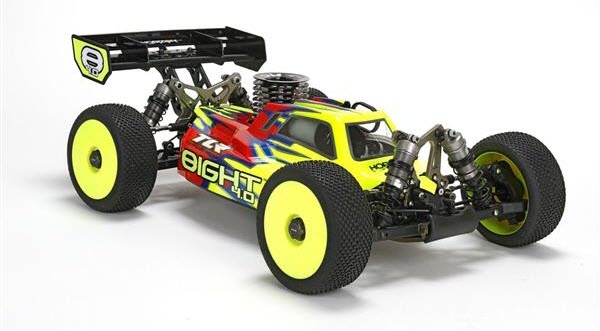 NITRO BUGGY
TLR 8IGHT 4.0
Despite some stiff competition in the nitro buggy scene since our last Readers’ Choice Awards, the 8IGHT soldiers on as the most popular fuel-burning, open-wheel off-roader. In fact, it’s the winningest nitro buggy in Readers’ Choice history, with 10 consecutive wins. That’s a full decade on top, but only the name’s the same for the 8IGHT. The new 4.0 model is loaded with improved suspension geometry, ball-bearing throttle and brake actuators, adjustable caster blocks, a 4mm 7075 aluminum chassis, and much more. 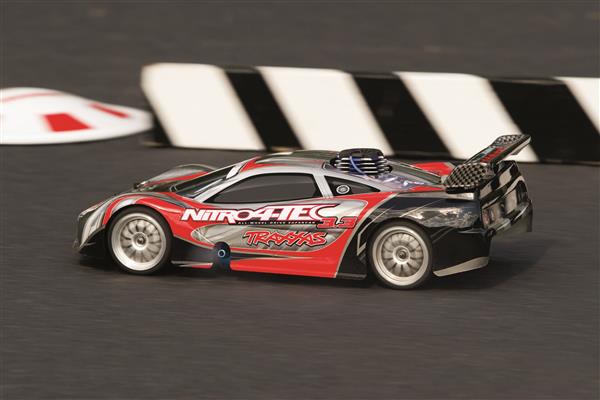 NITRO ON-ROAD
Traxxas Nitro 4-Tec 3.3
You would expect a 70mph car to be any brand’s fastest, but not if you’re Traxxas—the Nitro 4-Tec is their second-fastest car. It’s also the most successful nitro car in Readers’ Choice history, with eight wins including the last five in a row. It’s not hard to see the appeal; the lightweight touring platform gets the same high-output mill that Traxxas loads into its heaviest monster trucks, so the power-to-weight ratio is bananas. Electric start makes it easy to fire up, and the two-speed unspools ludicrous velocity. Looking good counts too, and supercar styling on what might be the best-looking wheels in RC is a hot combo. 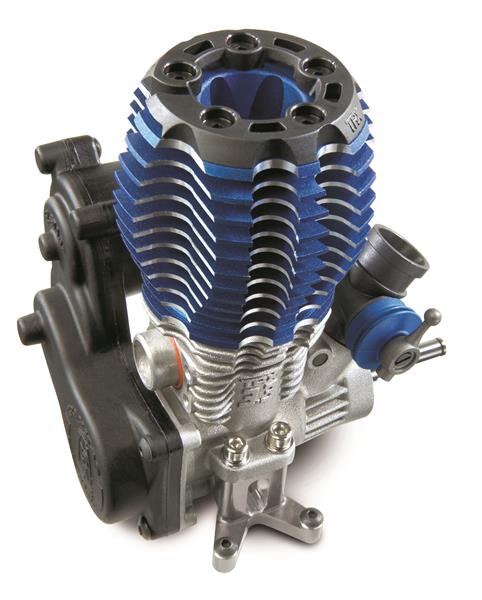 ENGINE
Traxxas TRX 3.3 Racing Engine
As the engine that powers the award-winning Traxxas Revo 3.3 and Nitro 4-Tec 3.3, it’s only fitting that the TRX 3.3 powerplant itself should get your nod as RC’s top engine. We got plenty of votes for race-winning brands like O.S. and Novarossi too, but the lion’s share went to what has to be RC’s best-selling engine when you factor in all those T-Maxx 3.3, Revo 3.3, and 4-Tec 3.3 sales. The TRX 3.3 has proven reliable, powerful, and durable for thousands of nitro fans, and that’s what makes it your number-one pick. 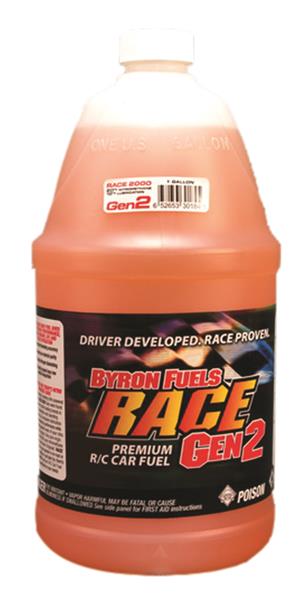 FUEL
Byron Originals Race Gen2
Byron’s orange juice continues to be your favorite fuel. It’s the choice of top pros like Ryan Lutz, Cody King, Mike Swauger, and Euro champ Elliott Boots but let’s be real, those guys are sponsored. What really matters are all the Joe Club Racers (that’s you) who actually pay hard-earned cash to fill their buggies and truggies, and choose Byron to go in their tanks—and then vote for it in the Readers’ Choice Awards! 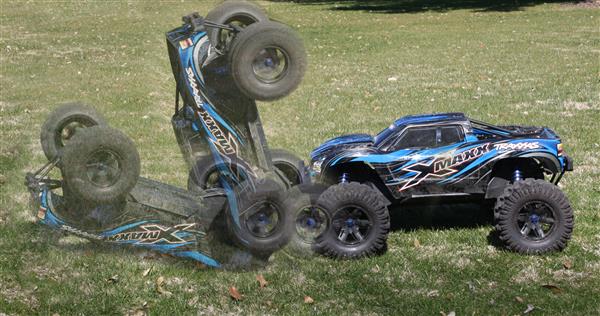 INNOVATION
Traxxas Self-Righting
Gotta agree with this pick, since we named “self-righting” our Innovation of the Year. And every time we’re spared a hike across a field to flip over a turtled truck, we say, “Yep, made the right call.” If your Traxxas X-Maxx, E-Maxx, or Stampede 4X4 flips over, Traxxas’ self-righting system uses the accelerometers and gyros built into the TSM system to determine the truck’s position, then automatically alternates forward and reverse throttle and puts the inertia of the wheels to work to rock the truck back onto all fours. All you do is push a button on the transmitter to make it happen. 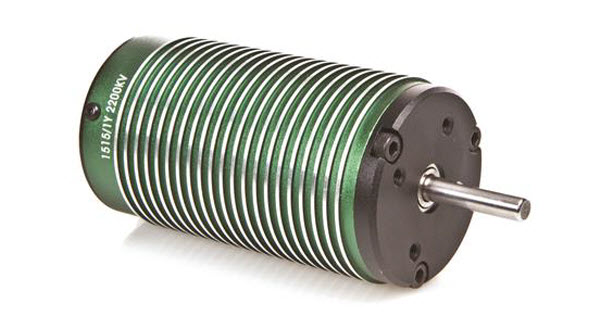 MOTOR
Castle Creations Neu-Castle 2200KV
Castle’s got a streak going here, with four wins in a row (plus a win back in 2009). Originally developed by motor-master Steve Neu, the powerhouse 2200Kv is a staple for monster truckers and big-power fans of all types, and this potent powerplant can also be found in RC’s mightiest RTR monster trucks. So yeah, if you’re looking for big-power cred, this motor has it! Your votes prove it: Castle’s green giant is still electric horsepower’s heaviest hitter. 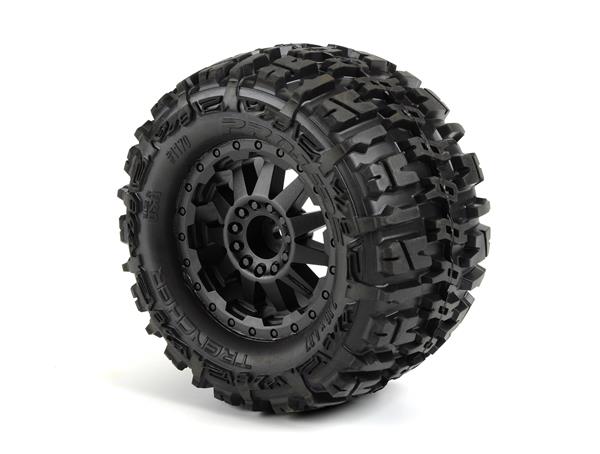 TIRE
Pro-Line Trencher 2.8
Along with the body category, Pro-Line dominates the tire voting every year. And every year, those votes are spread across a wide variety of rubber, from Prime slicks to meaty monster knobs. But the top tread is the Trencher, especially in the 2.8-inch size. We bet you guys are mostly buying them mounted on F-11 wheels, as shown here. Scale styling on trick wheels with major dirt-excavating capabilities—what’s not to love? 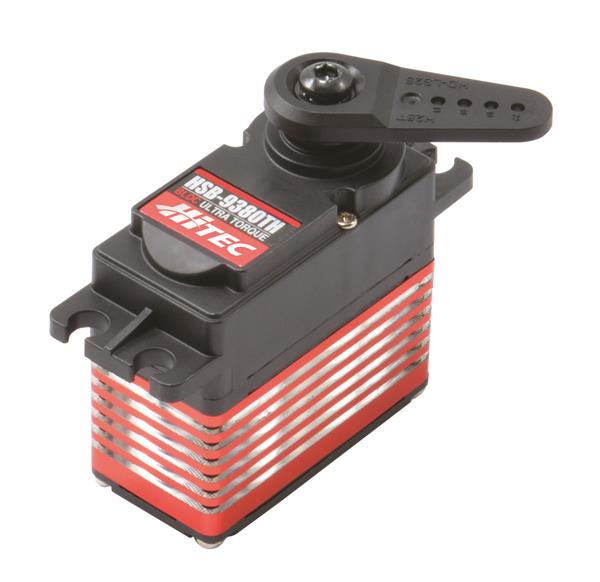 SERVO
Hitec HSB-9380TH
Hitec’s servo-award dynasty continues. After winning with 7955TG linkage-puller every year since the servo category first appeared in 2007, the latest HSB series has taken over with the second win in a row. The top vote-getter was the HSB-9380TH, and for good reason: with titanium gears, Neu brushless motors, and high-efficiency regenerative circuitry, Hitec’s top-performing “93XX” series servos are serious gear for high performance RC. The “Ultra Torque” 9380 twists to the tune of 472 oz.-in., making it ready for any RC duty, including 1/5 scale. 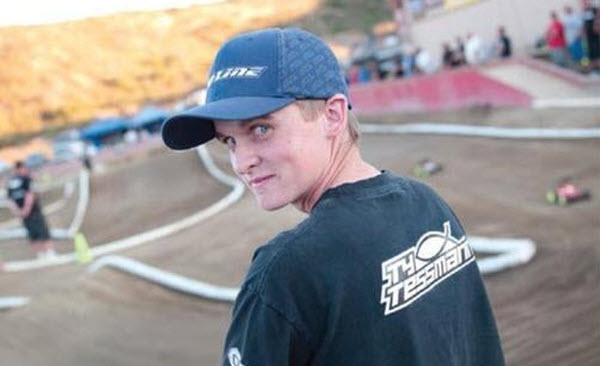 DRIVER
Ty Tessmann
That’s two in a row for Ty. The Canadian driver is known for his mellow demeanor but is a force on the track with his smooth-as-silk driving style. The 2014 IFMAR Nitro Off- Road World Champion is backed by a strong family team that includes his father and mother, and is known for his loyalty toward the sponsors who have stuck by him since he first started racing in 2003. All of his passion and love for racing haven’t gone unnoticed among his fans, and has helped him catapult to the top with your votes.