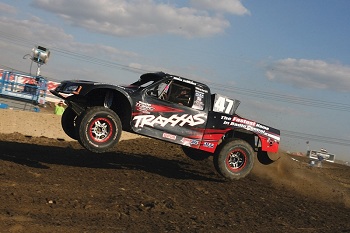 Officials with the TRAXXAS TORC Series and SPEED are excited to announce a partnership that moves “The Off Road Championship” to SPEED, with 18 new episodes this fall. Additionally, the Charlotte (4/20) and Chicago (7/20) rounds of the 2012 Traxxas TORC Series, presented by AMSOIL, will be broadcast “LIVE” on SPEEDTM –the only new live broadcast programming of short course off-road racing in America!

“Unprecedented!” beamed USAC President Kevin Miller of the “LIVE” broadcasts and TORC’s new partnership with SPEED. Our two LIVE airings from the Charlotte and Chicago NASCAR venues are ground-breaking for the sport of short course off-road racing. The Prime Time events will no doubt prove to be a publicity windfall for both the TORC Series and its racers. The move to SPEED allows us to dramatically increase the size and depth of the audience for our successful docu-reality coverage of the sport. TORC couldn’t be more pleased with its new partnership with SPEED.”

“I couldn’t be more stoked about SPEED coming on board with TORC,” said Johnson. “Last year SPEED did a phenomenal job covering our event in Chicago, right down to the announcers’ efforts and the amazing camera angles. Everyone with TORC elevated their game knowing we were live on SPEED, and that’ll no doubt continue this year. As a driver – and a fan of short course off-road racing – you couldn’t ask for a better way to kick off the 2012 TORC season.”

Entering its third season of production, TV’s premiere off-road racing reality show, TORC: The Off Road Championship, has revolutionized high-definition motorsports coverage by being the largest long-form TV production that utilizes RED digital cinema cameras. Never before seen viewpoints are created using HD GoPro cameras mounted on radio-controlled helicopters in the sky and TRAXXAS radio-controlled trucks being driven right on the track. The 18 new episodes of original programming begin on SPEED this fall with week-to-week story-telling of all the action, both on and off the track.

Over the last two seasons, the show has taken viewers deep inside the world of short course off-road racing; documenting the triumphs, challenges and controversy that viewers won’t find in traditional motorsports programming. “The battle for a championship is waged both on and off the track,” says BJ Birtwell, Executive Producer at The Armory, the production company for TORC: The Off-Road Championship. “There’s so much at stake for all these drivers that to simply show flag to flag racing would be a disservice to the amount of effort and emotion each team puts into their fight for the championship.”

The fastest, most punishing short course truck racing series on the planet features legendary off-road drivers – including five-time AMA Motocross champion and defending Traxxas TORC Series PRO 4×4 class champion Ricky Johnson and 2010 Champion Johnny Greaves, both of whom nearly came to blows after last year’s door-banging run to the finish line where Johnson actually landed on Greaves roof! No doubt fans who saw the incident and subsequent dust up between the teams afterwards will be back to watch the battle continue for the 2012 Traxxas TORC Series opener in Charlotte!

The TORC race caps a week of motorsports action at the Charlotte Motor Speedway Complex that begins with the NHRA 4-Wide Nationals on April 13-15 th, followed by the Charlotte Auto Fair that attracts over 100,000 automotive enthusiasts to the speedway. With radical jumps, stutter bumps, challenging berms and the rolling thunder of 900 horsepower off-road race trucks, Traxxas TORC Series short course off-road racing delivers in-your-face action that’s sure to win over the legions of NASCAR, sprint car, and Late Model fans that make Charlotte their home base. The Dirt Track at Charlotte motor speedway features excellent seating facilities in a family friendly environment. Every ticket is a free pit pass so fans can come early to experience the action in the pits, watch the live TV production ramp up, and check out the midway activities including Traxxas Radio Control truck demos and try-me track.

Where: The Dirt Track at Charlotte Motor Speedway

Tickets: $20 for adults, $10 for kids 12 and under. Register for free admission tickets for kids 13 and under courtesy of Traxxas, the Fastest Name in Radio Control and Charlotte Motor Speedway. Visit Traxxas.com for details.

Special: Super Buggies race for the first time at the Dirt Track at CMS this year; Traxxas R/C Demonstration by professional R/C vehicle drivers; Friday and Saturday feature a Public Pit Party with music by Tim Hall and Buffalo Country!