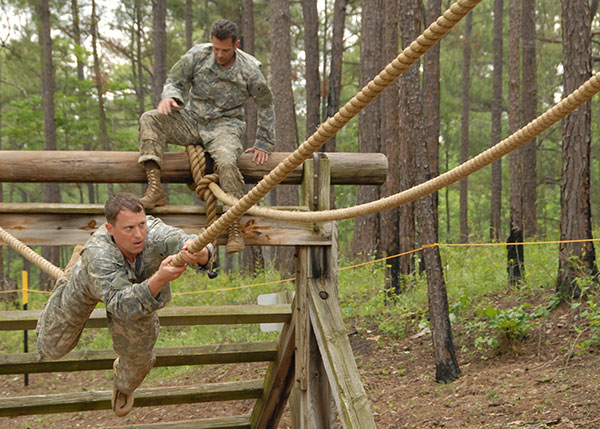 RC race tracks come in all shapes and sizes. That said, there has been a shift or evolution in tracks over the years. Tracks continue to get bigger and more complicated. In fact, huge tracks with MX-style jumps are no longer a rarity. Many hobby shops start off with small tracks and continue to look for ways to make them bigger as they simultaneously look for ways to incorporate more obstacles. The problem is that the tracks start to be more like obstacle courses than race tracks. Two things happen as a result. First, the quality of the racing suffers. Simply navigating the track is just as much, if not more, of a challenge than racing the competitors. Second, the tracks and the resulting racing are uninviting to beginners and even the casual occasional weekend warriors who can’t dedicate a large portion of their lives to racing and practicing. It’s one thing to have to practice so you can get around the track faster, but it’s another thing entirely to have to practice to be able to just make clean, consistent laps. That should be the goal of beginners. Intermediate drivers shouldn’t have to focus on that. While local tracks have gotten out of hand, in my opinion, this has even become a problem at the highest levels of racing. 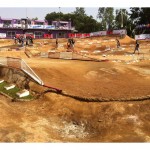 World championship tracks are often now simply, well, ridiculous. At the 2011 1/8-scale off-road world championship, highly talented professional drivers complained that they were hours into practice before they could even put down a handful of consecutive laps without crashing or having a serious bobble. Do you think the hour-long main event was full of the close side-by-side racing you’d expect from the world’s best drivers? When the tracks are so difficult that even the pros have a hard time turning laps, good racing will never be the result. So, what’s the solution? It’s simple. Let’s get back to basics. I realize most people have never been to a full-size off-road track, but I assure you that our RC tracks don’t even remotely resemble the real deal. Want better racing? make real race tracks. Have just as many smooth corners that flow one one to the next as there are tight switchback turns. Rethink the jumps. Have longer shorter jumps that send the vehicles flying low and level. A big double jump is fine, but having a track filled with colossal double and triple jumps really only works if everyone is running 1/8-scale buggies. 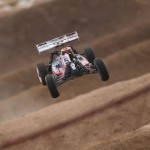 And trust me, the 1/8 scale guys won’t miss the relentless airtime, if they get rewarded with better racing. I believe we’d all agree that flat tracks are boring, but the vehicles do have have to be on the ground to be able to race. Fewer and smaller jumps will make for more actual racing. The bottom line is that I’d like to see the evolution of track design proceed in such a way that it comes full circle. I’ve only focused on the track designs. My desire to return to loamy tracks and step-pin style tires is another topic/rant all together.