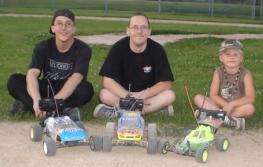 I was thinking the other day about how every time I go out and drive around with my RC in and around the neighborhood I often get the neighborhood kids asking the common question “Can I try?”  Look at this way, maybe not today, maybe not tomorrow but the future of the RC hobby is in the hands of the little one’s (he/she) who look up to us.  Sons, daughters, brothers,  sister’s, cousins, nephews/nieces and yes,  even the neighbor down the street.
In my case even when I’m camping and relaxing, the cars and trucks I bring along get attention.  I know I’m not alone.  It’s doesn’t take camping to do it. How many of you have been to so much as the local park and get stopped and asked about the R/C  Car/Truck your running?  Like some of us, we are lucky to have someone to share the hobby with at a certain level.  Not everyone shares.  I’m not saying pass over the remote to your race rig to a 5 year old and watch what happens, but on the other hand in a normal R/C car rig situation,  I think sharing is the way it’s meant to be.  Racing and fixing and tuning is one thing…. But I still enjoy what I like to call “Sunday driving”  Call it bashing if you want, but it’s not like I’m taking on big air or rattling apart my car/truck down a mountain of rocks or dirt race track.  Just drive.  Boot around here, climb this, putter around that…. Sound boring? well…. you’d be surprised on how many little eyes are watching.  Aside from the one’s who built up the courage to ask that famous question “Can I try”. Maybe it’s more common than I think. But don’t YOU remember the first time you set your eyes onto a professional grade RC car as a kid ??? Maybe it was  the guy down the street, family member or whoever. Maybe they let you drive, maybe they didn’t.
My point is this. The more open you are to sharing the hobby on any scale (no matter what the age or gender)  You will make a lifelong lasting impact on them. They will remember (like you and I) that “First day”. You never know. Maybe it won’t stick, but then again…. maybe like myself 20 some years later…. it will.  I haven’t looked back and loved everything the hobby has offered since that “first day.”  So as we all advance into the deeper realms of the hobby and experience “The next big thing in R/C” Just remember the little ones that will have to take over later. If we all want the hobby to be enjoyed by all ages and genders, don’t hold back. Embrace whatever, and any interest they may have today in the hobby because they are the ones who will be looking back 20 years from now and saying “My first car I got to drive was an old Traxxas Slash”  ( sounds funny now…. but you wait)

Here is my “First day”

my own love affair with a radio control car began as a kid when I watched in awe as my neighbor down the street played with his radio control car. I thought it was really neat and wanted one from that day forward. I later found out that  the car I had seen as a kid, some many years later turned out to be an old Tamiya Monster Beetle. Of course, by this point I had already gone knee deep in the hobby itself and I had to get my hands on that car I had first seen that summer day. To this day I am proud to say that I have acquired one, fully restored it and have it as a great show piece. Check it out in the “Modz Garage” at —  http://www.rcmodz.webs.com 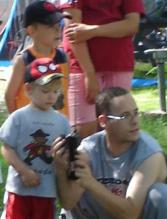 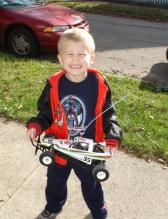 So what about you? Whats your “first time” R/C  story?