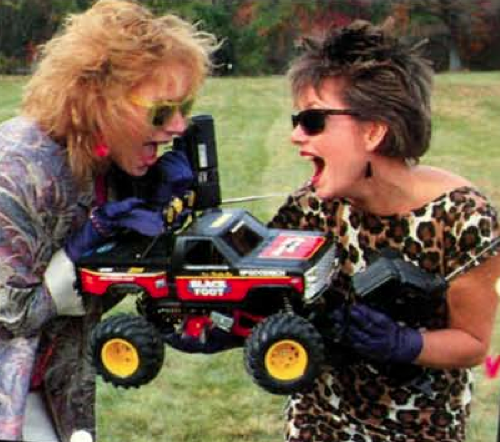 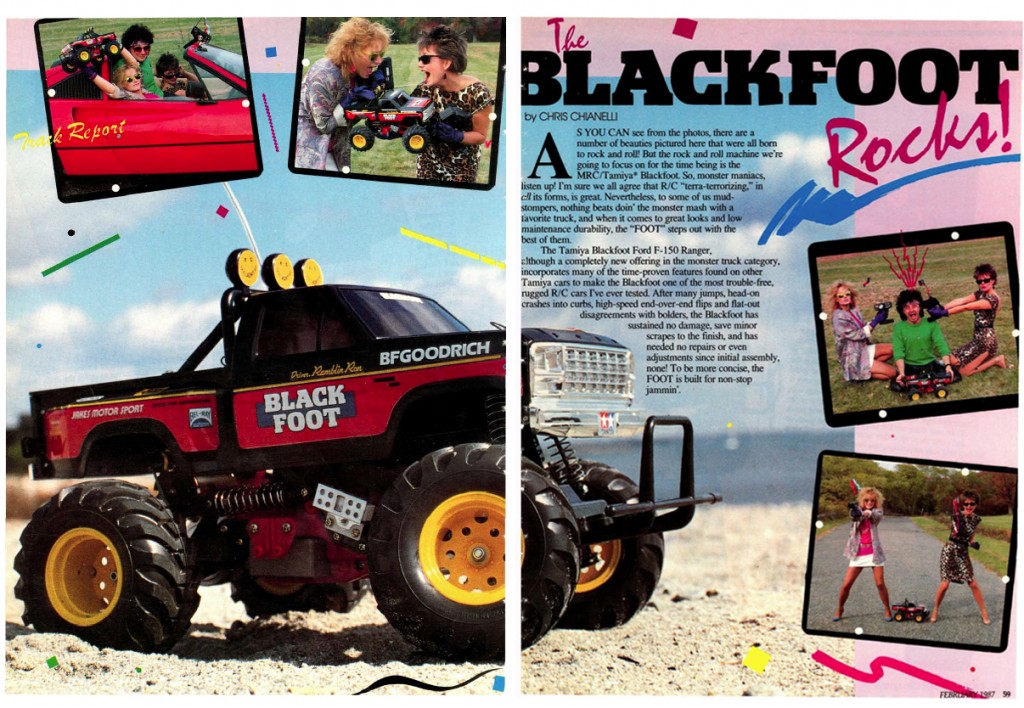 As you can see from the photos, there are a number of beauties pictured here that were all born to rock and roll! But the rock and roll machine we’re going to focus on for the time being is the MRC/Tamiya* Blackfoot. So, monster maniacs, listen up! I’m sure we all agree that R/C “terra-terrorizing,” in a!l its forms, is great Nevertheless, to some of us mudstompers, nothing beats doin’ the monster mash with a favorite truck, and when it comes to great looks and low maintenance durability, the “FOOT” steps out with the best of them. The Tamiya Blackfoot Ford F-150 Ranger, although a completely new offering in the monster truck category, incorporates many of the time-proven features found on other Tamiya cars to make the Blackfoot one of the most trouble-free, rugged R/C cars I’ve ever tested. After many jumps, head-on crashes into curbs, high-speed end-over-end flips and flat-out disagreements with holders, the Blackfoot has sustained no damage, save minor scrapes to the finish, and has needed no repairs or even adjustments since initial assembly, none! To be more concise, the FOOT is built for non-stop jammin’.

THE KIT. Starting at the front, heavy upper and lower swing arm links pivot off thick gauge aluminum suspension stays, making for a near bullet-proof front end. The bright red crossbraced ABS resin chassis halves are similar in design to those used in other Tamiya cars, as is the resister type three-step forward and reverse speed controller. Incidentally, battery eliminator circuitry is also included, but the instructions illustrate setup with or without the BEC. The differential is of the automotive type with metal planetary and bevel gears. Take note there are left and right beveled gears, so don’t mix them up. Other niceties to be found are a trailing arm rear suspension, ball bearings for the splined output short shafts (a complete set is available), half-shaft rubber boot dust covers, a Mabuchi RS-540S motor, and an accessory pack with four-way box wrench, liquid threadlock, grease, and switch conductive lubricant to name a few.

ASSEMBLY. Tamiya instructions are so complete and accurate that to deviate even a little is a mistake. On the left-hand side of each page is a column of parts to be used in the adjacent step. If a part or a screw doesn’t exactly match the actual size picture in the parts column, rest assured you’ve got the wrong part! The instructions are that precise. When I assembled the friction shocks 1 paid no attention to the spring size and soon found I had a much suffer right front suspension than a left As it turned out. the rear springs are slightly heavier than the front, and well they should be. Sure enough, I matched up all four springs to the instructions and there were two frontand two ever-so-slightly heavier rear. The difference was minisculc, but accurately noted in the booklet. Enough said.All in all there are 39 detailed steps to guide you, so take full advantage of them. In doing so, I was able to complete my Blackfoot in nine hours. If you find at completion that you have a few parts left over, don’t be alarmed. As I’ve already stated, the Blackfoot does share some components with other Tamiya cars, so the extra parts left on the parts tree were never meant for use on the Blackfoot, but for another car.By the way, I purposely used no paint in this kit to illustrate the colorful model arrived at sans brush. What you see is what you get, from the smoke windshield to the red undercarriage. As you can see from the photos, the FOOT is truly a stand-out machine with its yellow wheels and bright decals. Of course, if you so desire, red tail lights, yellow parking lights, and silver door handles could beadded, but who would really notice with such a brilliantly colored truck?PERFORMANCE. With its 5-inch monster wheels, substantial ground clearance, smooth differential, Mabuchi RS 540S motor, light weight, undercarriage skid plate, and high-flex servo saver, one would suspect the Blackfoot is ready for the badlands—and it is.Louis DeFrancesco Jr., known to those close to him as the “Abuse Master General,” certainly lived up to his name during the photo session. Multiple jumps off 2-foot high ledges, hill climbs, rocky roads, tumbles down the other side of hills, and continued running in soft sand— which the FOOT handled very well with its large paw prints—were the prime directives of the day. The truck also tracked very well on pavement, much to my surprise. If you intend to run your truck on pavement often, I recommend going with a reduced steering rate and making sure you have a few degrees of toe-in as you would with off-road use. As I’ve previously mentioned, the Blackfoot has needed no adjustments since assembly. The truck is tough. So, if you’re the type who loves to “rock” with the mud and “Stones,” the Tamiya Blackfoot is definitely for you. 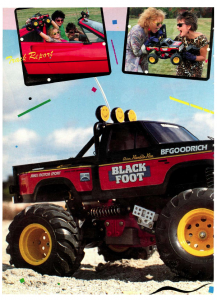 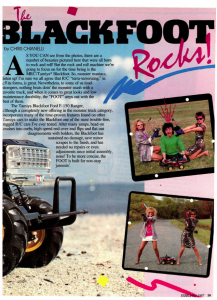 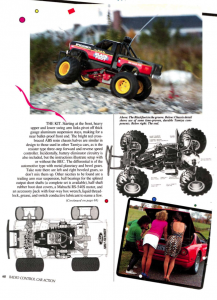 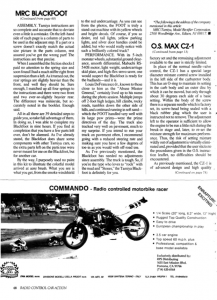