When Toyota released the FJ Cruiser back in 2006, Toyota fans as well as avid off roaders worldwide rejoiced. The SUV’s off road capabilities were impressive to say the least and its retro look harkened back to the classic look of Toyota’s beloved early Land Cruisers. It was a sad day when Toyota announced that they would cease production of this go anywhere, do anything activity vehicle.

Fans of the FJ Cruiser can rejoice once again. FMS has faithfully reproduced the FJ Cruiser in all its detail, scaled down to 1/18th scale. The ready to run RC vehicle is highly detailed and packed full of features that any crawler enthusiast is sure to have fun with. It’s small enough to crawl in the comfort of your home yet robust enough to take on some real trails, FMS’ FJ Cruiser perfectly captures the feel of the original but in 1/18-scale. Best of all, you’re looking at a sub-$200 price tag all in.

FMS’ FJ Cruiser is an officially licensed detailed scale replica that features details including a classic yellow and white hard-shell body, full scale interior complete with center console and seats, a roof mounted luggage rack, three front wipers and more. What’s more, FMS packs in even more detail by including fully functioning LED lighting that include headlights, turn signals and even reverse lights that activate when reversing. There’s nothing like functioning lights to make an RC look as real as possible, especially when it comes to flashing turn signals and reverse lights.

Power for the FJ is delivered by a high-torque 55T brushed motor that drives a likewise high-torque gearbox. Its wheels are scaled to fit with FMS’ other wheel and tire offerings so you can change them out for a customized look. The FJ comes with grippy beadlock mud terrain tires as standard.

The Cruiser is based on a feature-packed trail-proven chassis. Aluminum frame rails provide a rigid platform while multilink suspension geometry with a panhard bar allows for maximum axle articulation. Coiled friction shocks come standard. The SUV may look small but it’s fully capable on the trail as we found out first hand. 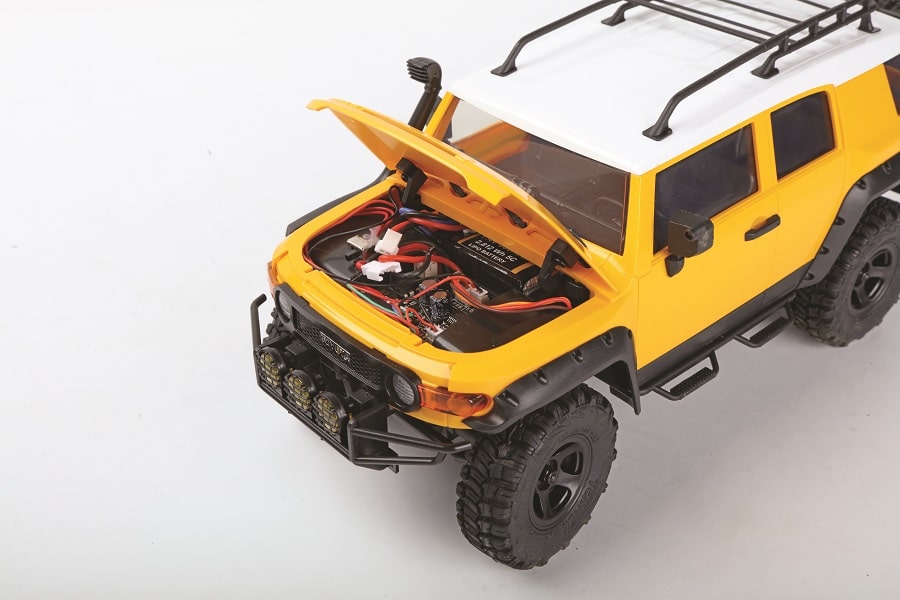 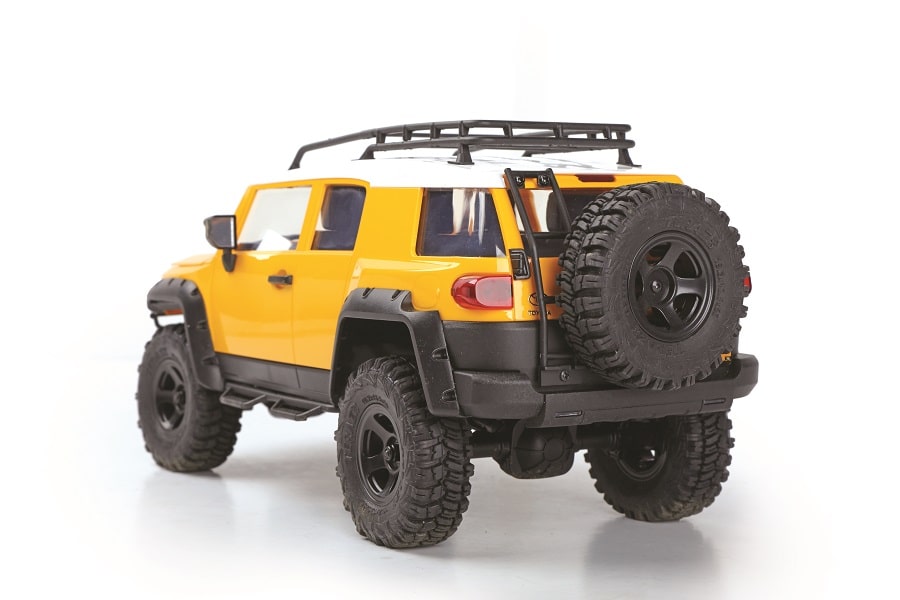 TRAIL RUN
After getting acquainted with the FJ, we charged up and installed its included 7.4V 380mAh battery and hit the trails. A fun note is that its electronics and battery plugs are accessed through its opening and closing hood. That’s pretty convenient if you ask us.
When powered up, the FJ moved around nimbly and looked terrific with its working lights and articulating suspension. The turn signals flashed according to the direction that we turned the transmitter’s wheel. That’s a neat detail. The SUV is lightweight however, so it does tend to bounce around a fair bit. This is to be expected with smaller scale vehicles however. We suggest adding some weights below the beltline or swapping out to oil-filled shocks to give it a more realistic look while on the move. Even though the motor looks small, it seems to provide a pretty high power-to-weight ratio, which makes it a real pleasure to drive.

FINAL THOUGHTS
FMS really hit it out of the park in terms of scale looks, performance and even working LED lights. The details of this FJ Cruiser are incredible. Even the side mirrors feature real mirrors, not chrome stickers like we see on most RCs. With an asking price of $190, it’s a really good bargain for such as detailed crawler. We look forward to seeing how enthusiasts further modify this pint-sized rig. Some 3D-printed gear and some painted on weathering is sure to make even more of a stunner.