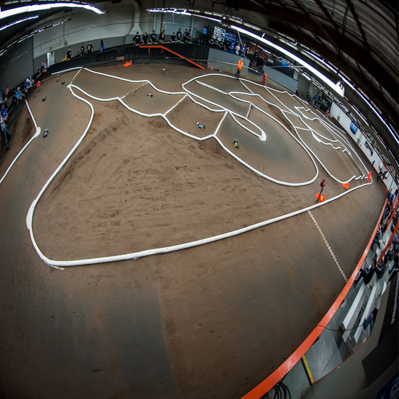 The Reedy Race always plays host to some of the best electric off-road racing and an event that showcase the talents of the best in the world. In order to challenge these elite drivers, a special layout is done to provide good flow, close racing and challenging features. Although still in the practice faze, and lacking the paint and logos that will adorn the track when actual racing gets under way on Friday, the track is set and ready for action. All of this takes place on groomed and misted clay surface that approaches slick tire conditions, making for high speeds and lightning reactions. Let’s take a look at the main features. 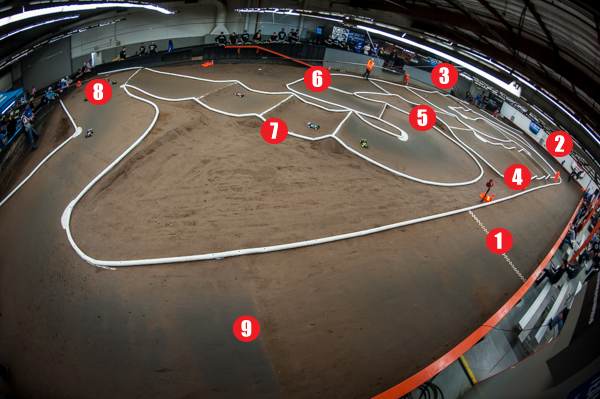 1) This is the main straight-away and where the transponder loop is located. It’s long by any standards and really showcases the speed of the modified motors.

2) The sweeper at the end of the straight helps maintain much of the speed left over and sometimes requires  a slight tap of the brakes to keep the buggies from impacting the outer wall. As drivers navigate it, they constantly gain elevation capped off by a sharp bump about two thirds of the way through. If driven wrong, the suspension will unload and cause some ill-fated handling.

3) The next section is a low-speed double. This isn’t really hard jump, but doing it with the correct angle and speed is key in order for drivers to stay tight for the next series of tight turns.

4) After a small right turn, a very technical triple confronts the drivers. This is where things can get really grippy. With a short run-up and a landing that is precarious for the next section, a lot of carnage is already taking place.

5) A very unusual double is next on the agenda. The second part of the jump is higher then the first, so most are opting to just single and then compress the next one. Those risking jumping the entire feature can be faced with clipping it and having their buggy cartwheel forward. This is also compounded with the next left hand turn. Because of this, most are shying away from the latter decision, especially since the reward isn’t paying much dividends.

6) The next three step downs are quickly becoming a Reedy Race tradition. As the buggies go through this area, three 4″ drop downs unsettle the buggies and provide an additional area of attention.

7) A big triple is next, and like the previous one has a short approach. As grip levels increase, it is slowly becoming easier, but 2WD buggies are still struggling and crashes are very common.

8) After the triple, the drivers must climb a quick step section in to the left hand corner that continues in to a chicane area. Navigating it is fairly straight-forward with the fastest line tight and almost completely straight. However, this is easier said than done and a lot of time can be made up or lost.

9) As drivers enter the straight, they aren’t quite ready to relax. With wheels still fighting to turn left, they must also deal with a step down. This unloads the suspension and challenges the drivers to keep things square early on or face a gut wrenching series of swaps as their buggy fights to stay on a straight line. Wow. 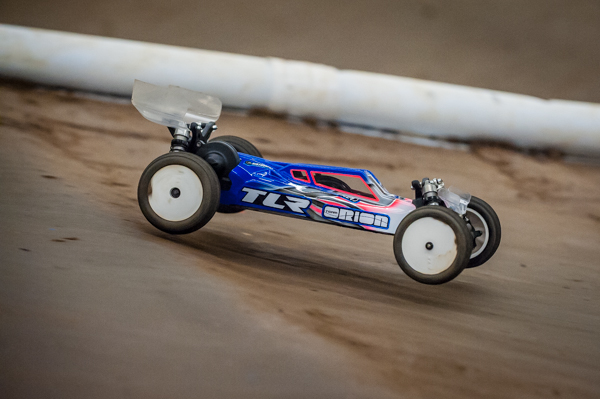 Defending champion Ryan Maifield is at the event with his new TLR 22 3.0 and is adapting quick to the tricky conditions.