Reader’s Rides is sponsored by PRO-LINE. Click for the latest gear!

Everyone knows RC4WD as the purveyor of fine scale tune-up and dress-up items for our favorite trail rigs. In fact, probably 8 out of 10 Reader’s Ride submissions we get in the scale crawler genre feature at least one part from the RC4WD catalogue. But we’ve started to notice another trend: ultra-scale builds based off the company’s excellent kit the Trail Finder 2 — and its no coincidence many take the form of the Toyota Hilux, one of the TF2’s best body options. So we gathered up three of the best for you to admire along with us. Check them out! 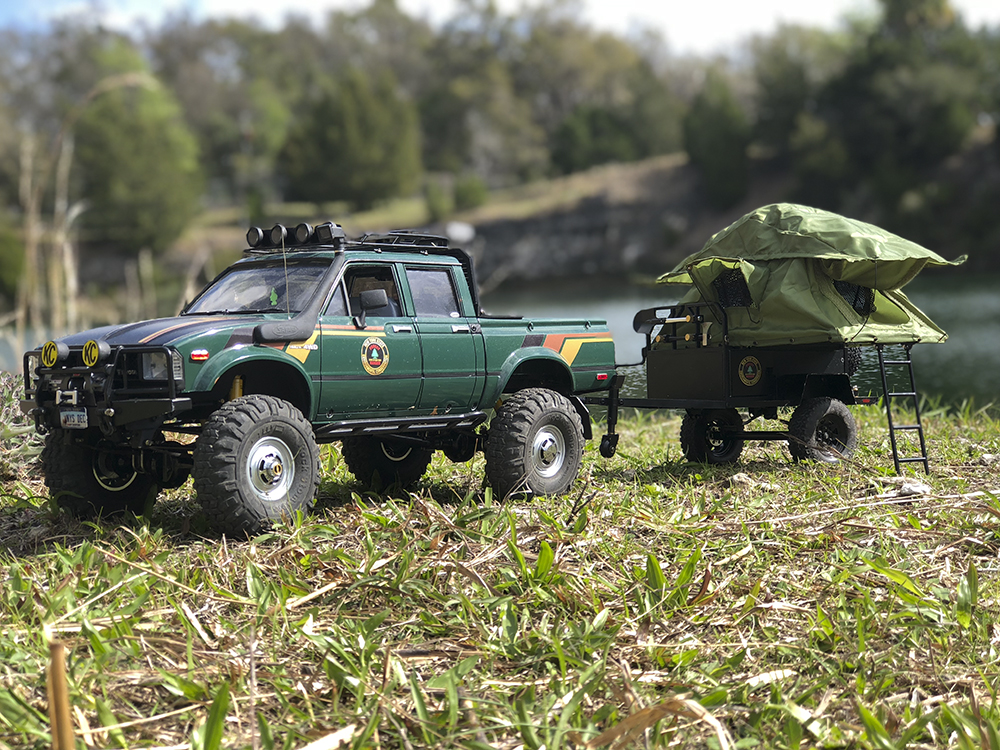 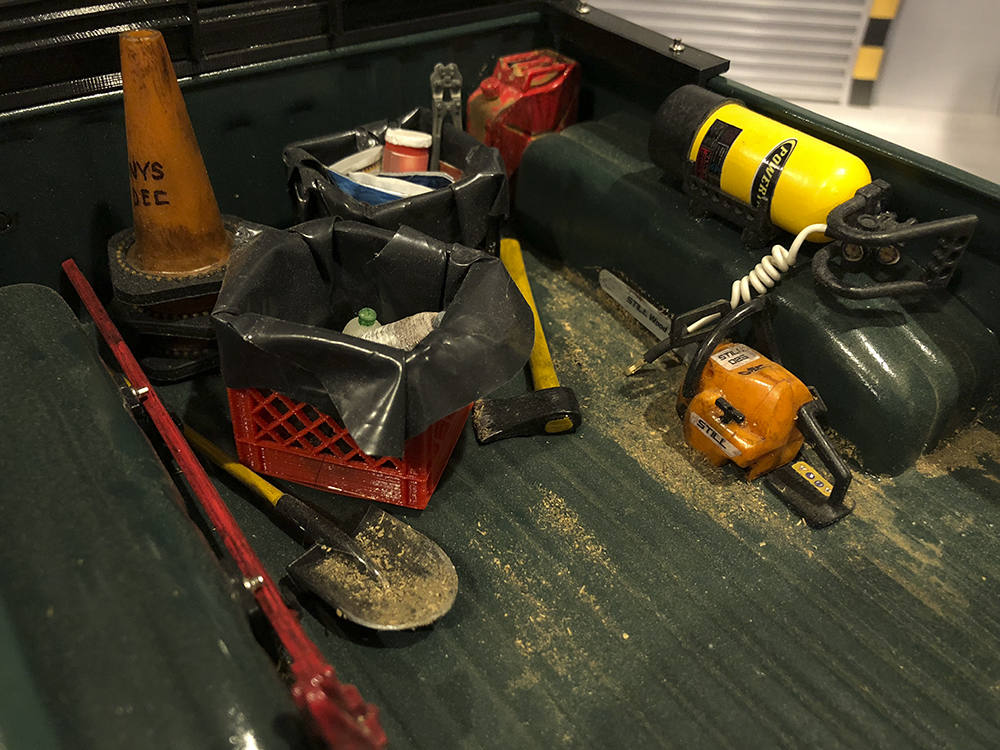 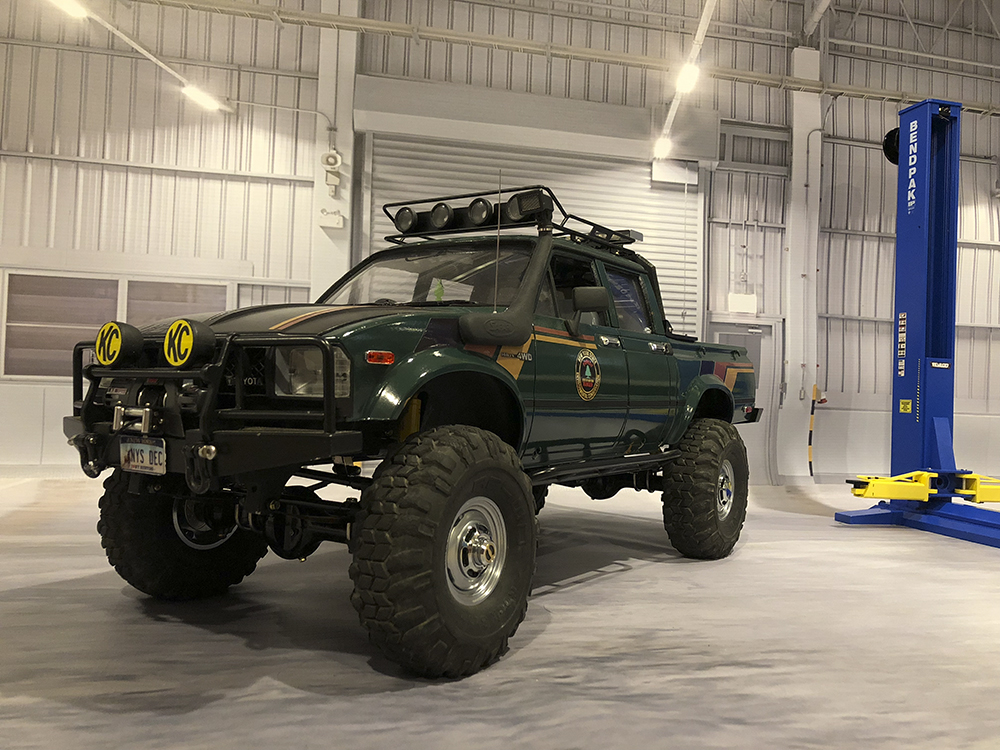 Mike is such a scale virtuoso that we did a feature story on some of his best builds (Custom Builder Closeup: Mike Lohmann) in the October 2018 issue of RCCA. So its really saying something when he says this 4-door LWB Hilux is his most detailed build to date. Much of that credit goes to the tons of 3D-printed extra scale goodies. Just check out the engine — a 3D-printed GCM Racing 22R. The coolant and washer jug bottles are also 3D-printed—by VS Customs. Many of the other engine bay details he scratch-built from styrene, such as the brake master cylinder/booster and clutch master. In the back of the truck the milk crates and “Powertank” are also 3D-printed, and give the truck a real-life authenticity right down to the included sawdust and wood chips around the scale chainsaw! 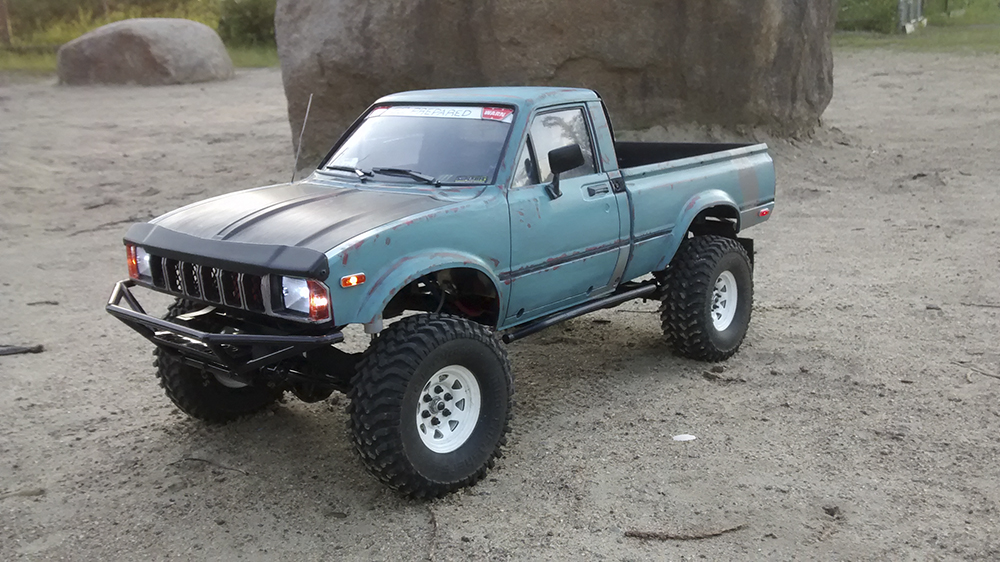 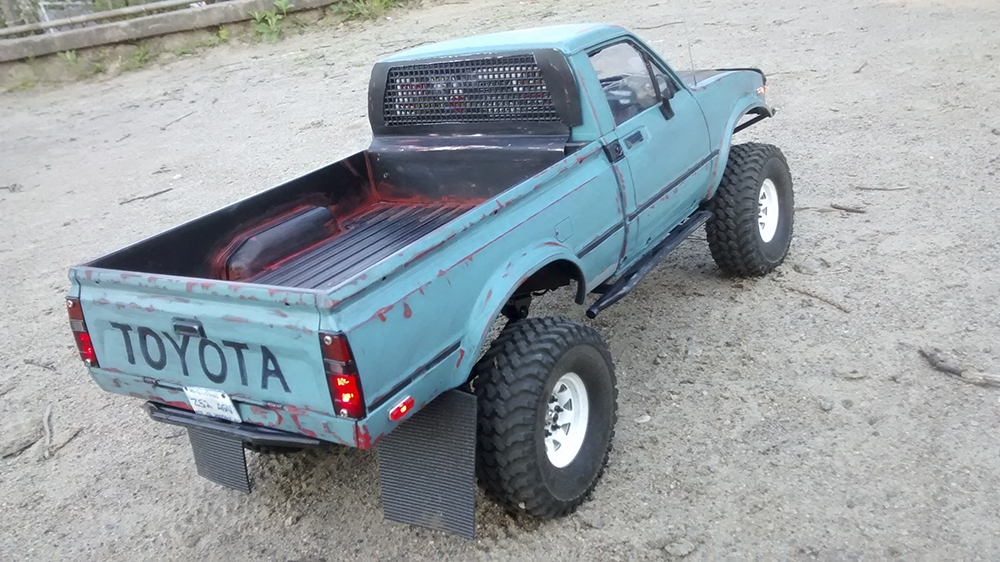 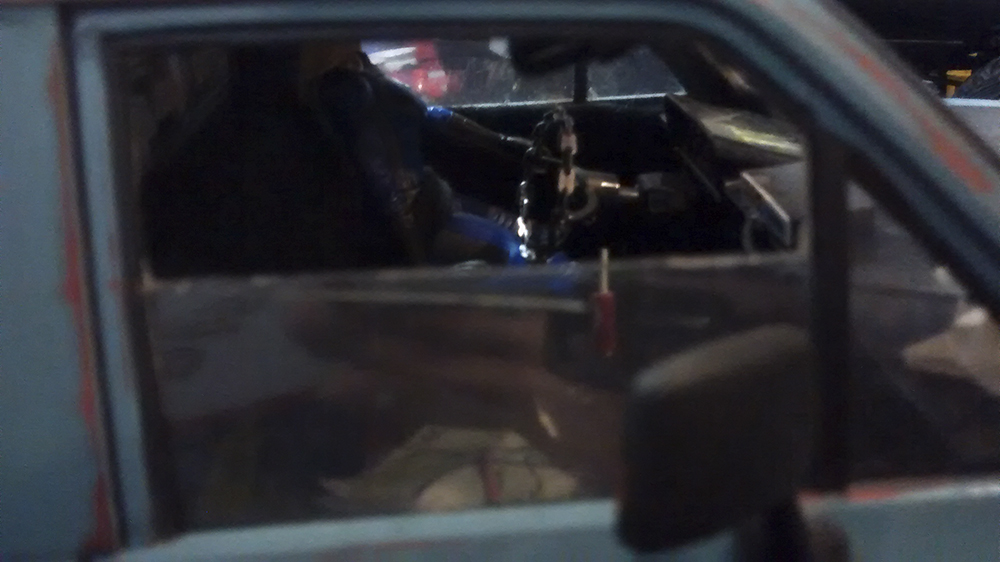 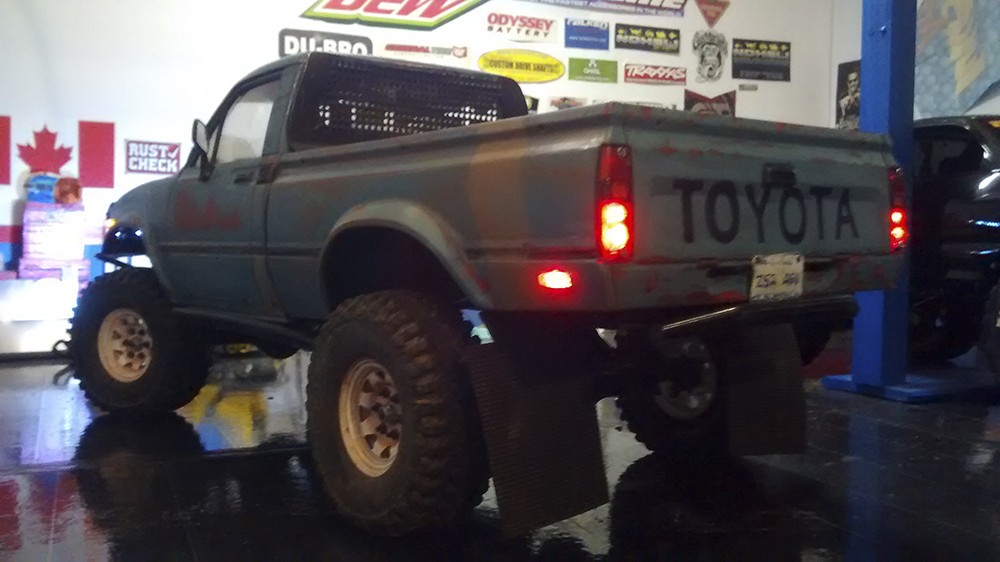 Over the course of a year Zach made gradual progress on his RC4WD Trail Finder 2, and he’s still tweaking it. Many of the parts are Zach’s own creations, but he did use a few RC4WD pieces too, including Superlift scale shocks and steering link, and the Mojave basic light kit. From there he added custom-built rear inner fender wells, mud flaps and brackets, plus chopped front and rear bumpers. To match the cut-bumper crawler look he also cut out the grille and front end. Inside he fabricated a new speed control mounting plate to fit it under the bed (along with the required custom wiring) and longer front shock towers made of 22-gauge steel. There’s also a full interior with driver figure and painted light lenses and he’s got a set of opening doors on order. To finish it off Zach repainted the truck from the original RTR red, first with a Red Oxide as a base coat and then Bahama Sea Blue (both from Krylon rattle-cans)—not bad for his first weathering job! 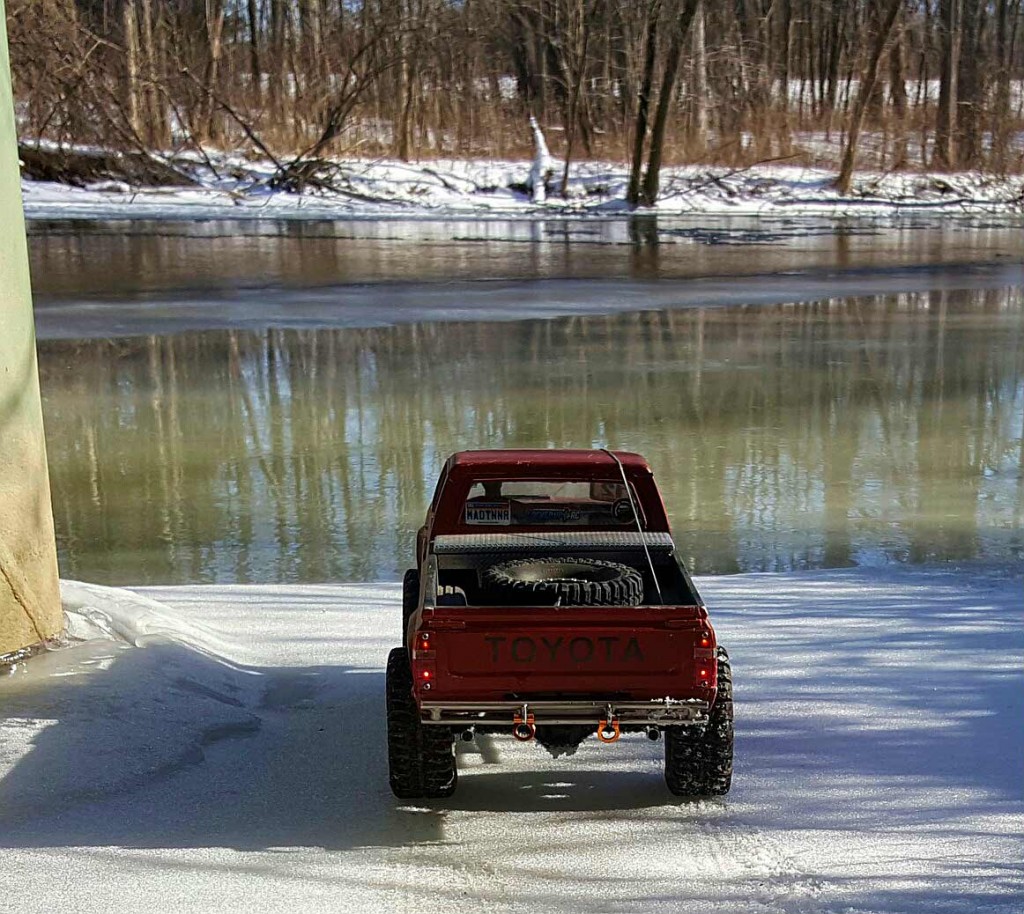 Brian has owned his TF2 Toyota for a couple of years, and in that time he has competed with it several times, including a 2nd place at the Team KNK Hardware G6. The TF2 sports a Holmes Hobbies 45T brushed motor controlled but a Holmes waterproof BRXL. It now has Junfac drive shafts and Motoworx 1.9 beadlock wheels wrapped in Dick Cepek Mud Country tires. It wears custom bumpers by Grey Matter Laboratory and a full light kit. A Heyok controller operates the servo winch. And we love the gritty weathered look of the Hilux body.

Want to see your machine in Reader’s Rides? Send photos and a description to readersrides@airage.com. Be sure to send the full-size photos. If that bogs your email, use WeTransfer–it’s easy and free.

For tips on photographing your car, watch this video:

Reader’s Rides is sponsored by PRO-LINE. Click for the latest gear!