In case you missed it, we’ve already unboxed the Pro-Line Ambush 4X4 and covered all it’s tech features here.  Now that we’ve had a few days with the truck, it has proven to be a reliable indoors-and-out fun machine that invites you to challenge its climbing and crawling ability.

As the video shows, the Ambush will happily churn through all kinds of uneven terrain, including what would be “massive boulders” if scaled up to full-size. I kept the throttle pinned for maximum movement in the video, but rest assured, the Ambush can do super-slow crawling with precision. The truck has all the torque needed to scale impressively steep inclines, about 40 degrees in this clip. That’s out of the box; if you want to really get into it with weighted wheels and the like, expect even greater performance. 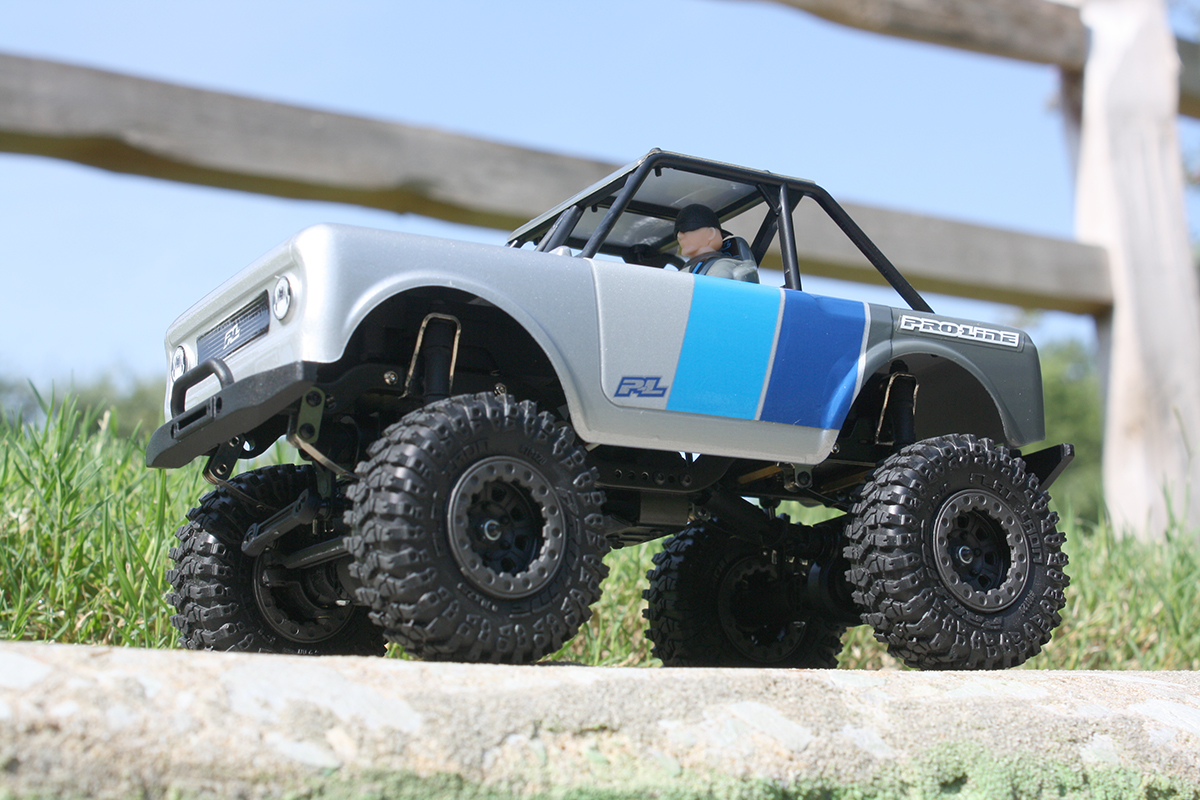 The Ambush has a relatively bouncy ride, which is expected for the car’s size and weight (10.7 oz.) and suspension (leaf springs all around). There simply isn’t enough mass at 1/25 scale, and enough movement in a leaf-spring design, to deliver the soft suspension action and extreme articulation of 1/10 solid-axle models. If you “flex it out,” you’ll see about a half-inch of lift at a corner before there’s daylight under another tire. However, you can remove the springs from the shock bodies and even remove leaves from the leaf springs (each spring is comprised of three leaves) to experiment with a softer ride and/or more flex. I just left the truck stock and kept on drivin’.

Run time is extra-long, as tested by a walk around the neighborhood. Running non-stop at full speed (which is a slow walking pace), the Ambush covered a 2-mile circuit before the low-voltage system kicked in. I also took the opportunity to test radio range. I doubt any Ambush user will bother driving more than 30 feet away, but I was able to get a few hundred feet away with no loss of control (I didn’t bother going farther than that, because I could barely see what the little truck was doing at that distance). 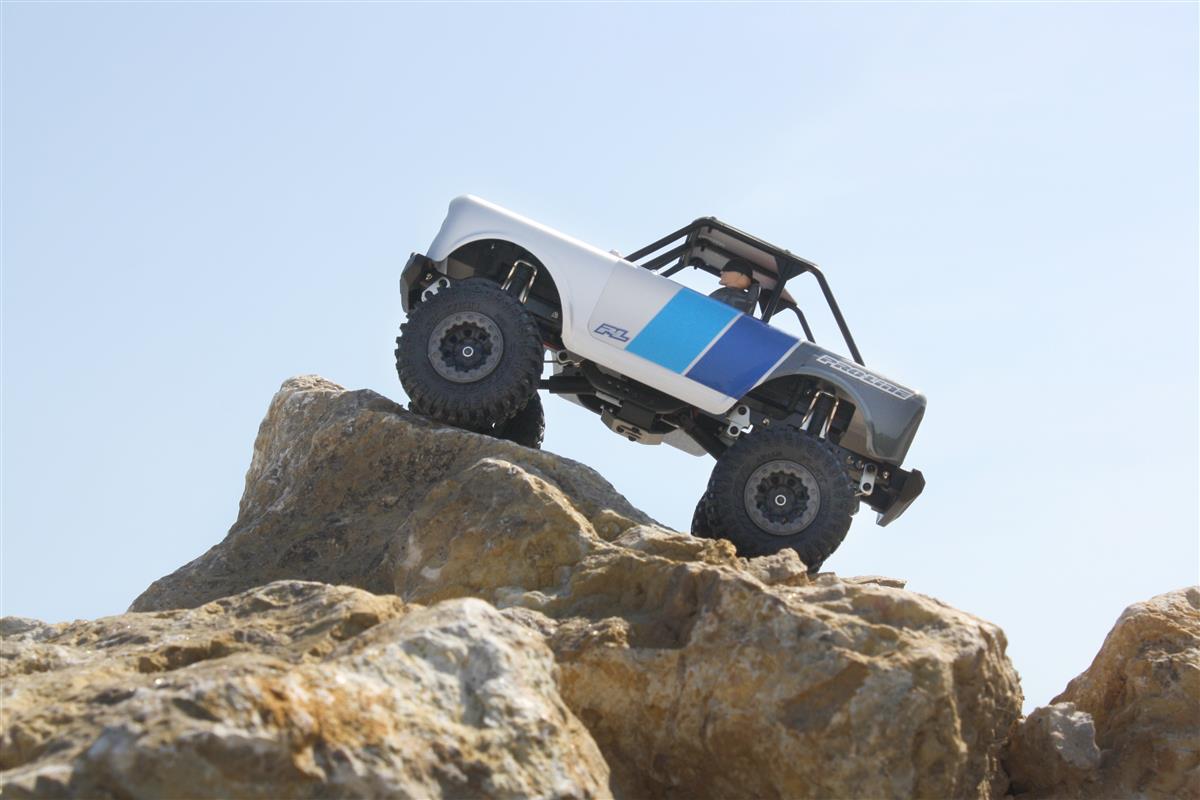 I had fun brute-forcing the Ambush through rocks, grass, roots, etc., but if you want to creep and crawl, the Ambush will happily do that too. The transmitter’s Low-Medium-High setting is handy, and the Low setting helps with really tricky lines. Instead of using half of the trigger-travel to avoid tapping full throttle, the low setting let’s you use all of the trigger without fear of squirting the Ambush off of whatever obstacle you’re working on. And it’ll stay put when you let off the throttle–the worm gears in the axles hold the truck steady while you contemplate your next move. Most of the terrain I had easy access too was more trail-trucking oriented than real rock-crawling, and the Ambush looks great doing that type of work. The Scout styling, driver figure, detailed wheels and tires, and leaf-springs hanging below the bodywork make a strong true-scale impression. And, it’s durable. I dropped the Ambush about six feet onto concrete while posing the truck on top of a fake-rock sign to get photos, and rolled it off numerous rock-walls for the video shoot (that’s what happens when you drive with one hand and film with the other). After many tumbles, I only managed to scuff the decals. The lightweight Lexan body shrugs off abuse.

After a few hours of fun with the Ambush, it’s still as tight and ready to hit the rocks as when I first popped it out of the box. The USB charger is convenient, and it balances the pack too–you’ll notice there’s actually a red and green LED for each cell to indicate “charging in progress” and “fully charged.” I also discovered the radio has an inactivity alarm; if you don’t touch the wheel or trigger for ten minutes, it will beep to remind you it’s on.

In all, Pro-Line’s first RTR (and first mini, and first rock-crawler/trail truck) packs a lot of fun into 1/25 scale, and I expect we’ll see all kinds of setup tricks from modders once the Ambush hits stores. I’m also counting on more body, wheel and tire options from Pro-Line, if not others. Straight out of the window box, the truck is fun and versatile, and very nicely made, right down to the high-quality electronics. It’s not cheap at $184, but it’s not cheaply made, either. You get what you pay for, and in this case, it’s a fun and inspiring little truck that’s big on detail, durability, and versatility. 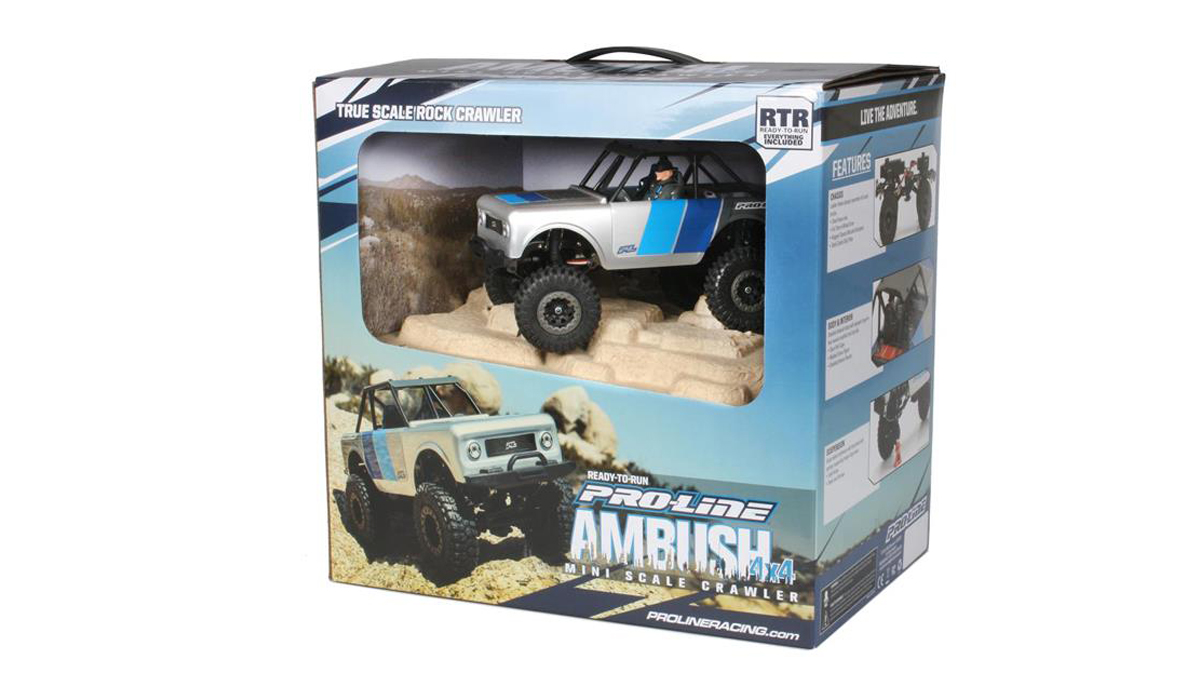