I think we can all agree the Traxxas X-Maxx is pretty awesome, especially now that it has 8S horsepower. Less awesome: since it’s an RTR, your X-Maxx is going to look just like everyone else’s (other than choosing red, green, or blue for the body, that is). Good news, Pro-Line is on the case. With the new Ford F-150 Raptor body, Impulse wheels and Badlands MX43 tires, it’s easy to give your X-Maxx a new look and improved performance, and (in the long run) save a few bucks on tires—the Pro-Loc beadlock system lets you skip the CA and re-use the rims. I installed the body, wheel and tire combo on my X-Maxx for a full shake-down. 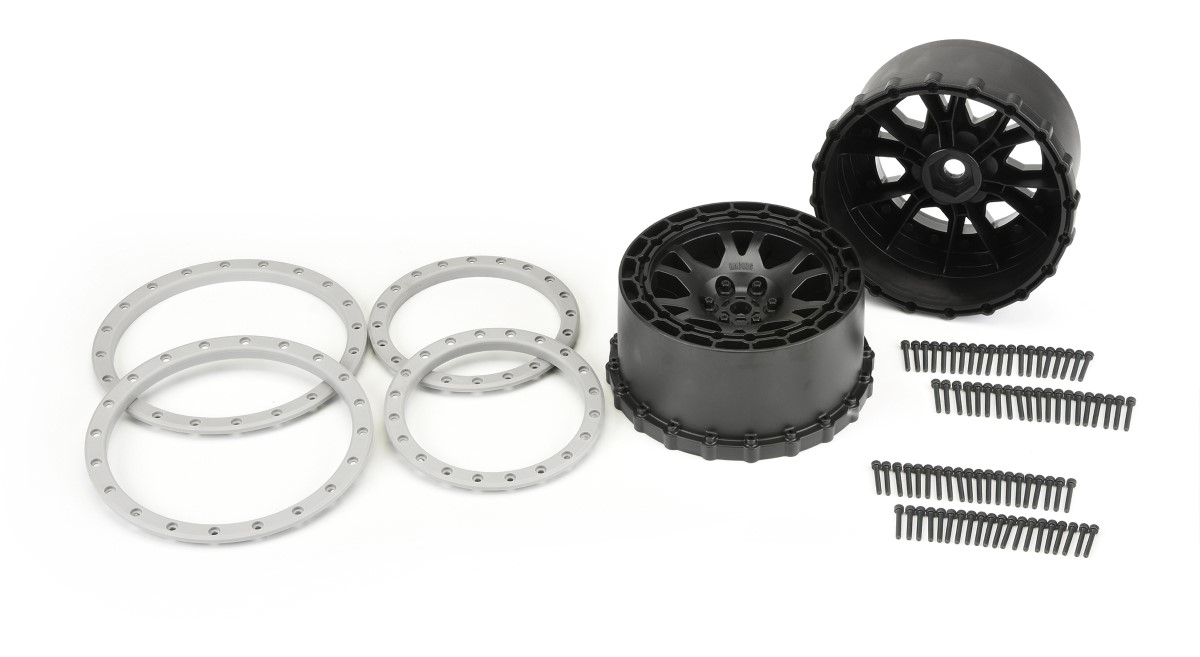 The wheels are sold in pairs, and each wheel takes 40 screws. You, uh, might want to get a power driver. 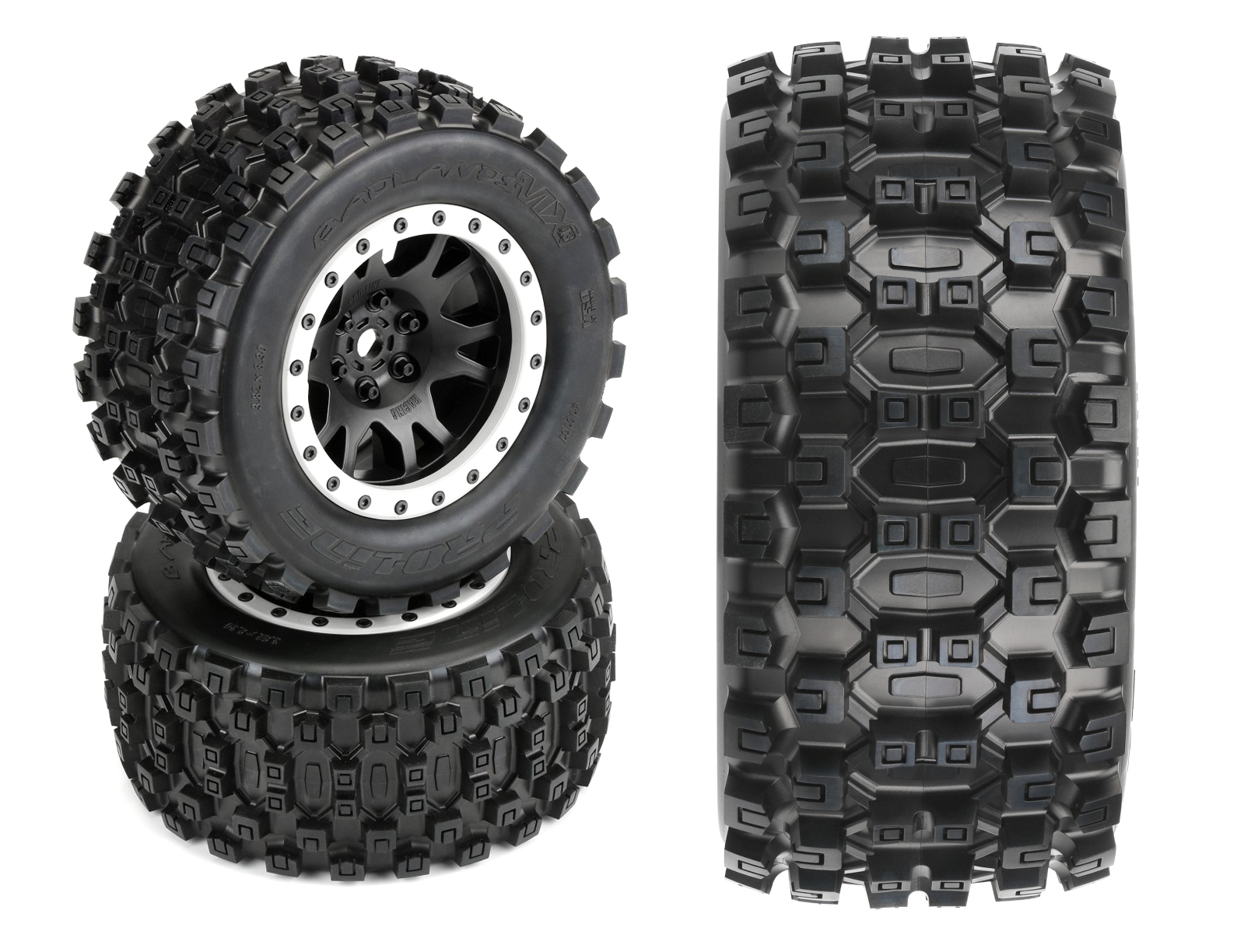 You can buy the Impulse wheels and Badlands Pro-Loc tires separately, or let Pro-Line handle the mounting and save you a bunch of wrenching.

Pro-Loc Assembly
I opted for a set of unmounted Badlands MX43 tires and Impulse rims so I could get the full Pro-Loc experience and report back to you guys, but you can also get the combo tested here assembled for you by Pro-Line. You’ll spend an extra $15 or so, which isn’t bad based on my experience going the DIY route. Mounting the tires on the rims isn’t hard, but it is time consuming. Each tire is held in place by forty 3x20mm screws, so that’s 160 in total to put a full set of these sneakers on your X-Maxx. You definitely want to get a power driver for this job! The tires slip over the rims like any other tire (albeit with more finger and thumb strength required), and then the tire’s bead is pressed into the rim. Pro-Line’s YouTube how-to video shows the tires being installed “dry,” but when I did the same I wasn’t able to get the bead to fully seat in the rim. “No problem,” I thought, “I’ll just let the bead-lock ring push the tire into place when I tighten the screws.” Nope. Instead of squeezing the bead into the rim, the screw heads distorted the plastic beadlock ring and passed right through. The fix was easy: I just sprayed the tire beads and the rim’s mounting channel with Simple Green to lubricate them, and the beads seated easily without having to use the beadlock rings as a press. After seating the beads with my thumbs, all I had to do was place the beadlock rings onto the sidewalls and fire all the screws in. I followed a criss-cross pattern to ensure even tightness, but you only have to snug the screws up. The Pro-Loc design doesn’t rely on squishing force from the rings to hold the tires, so there’s no benefit to socking the screws down extra tight. In fact, doing so may cause the rings to distort. Snug is all you need. 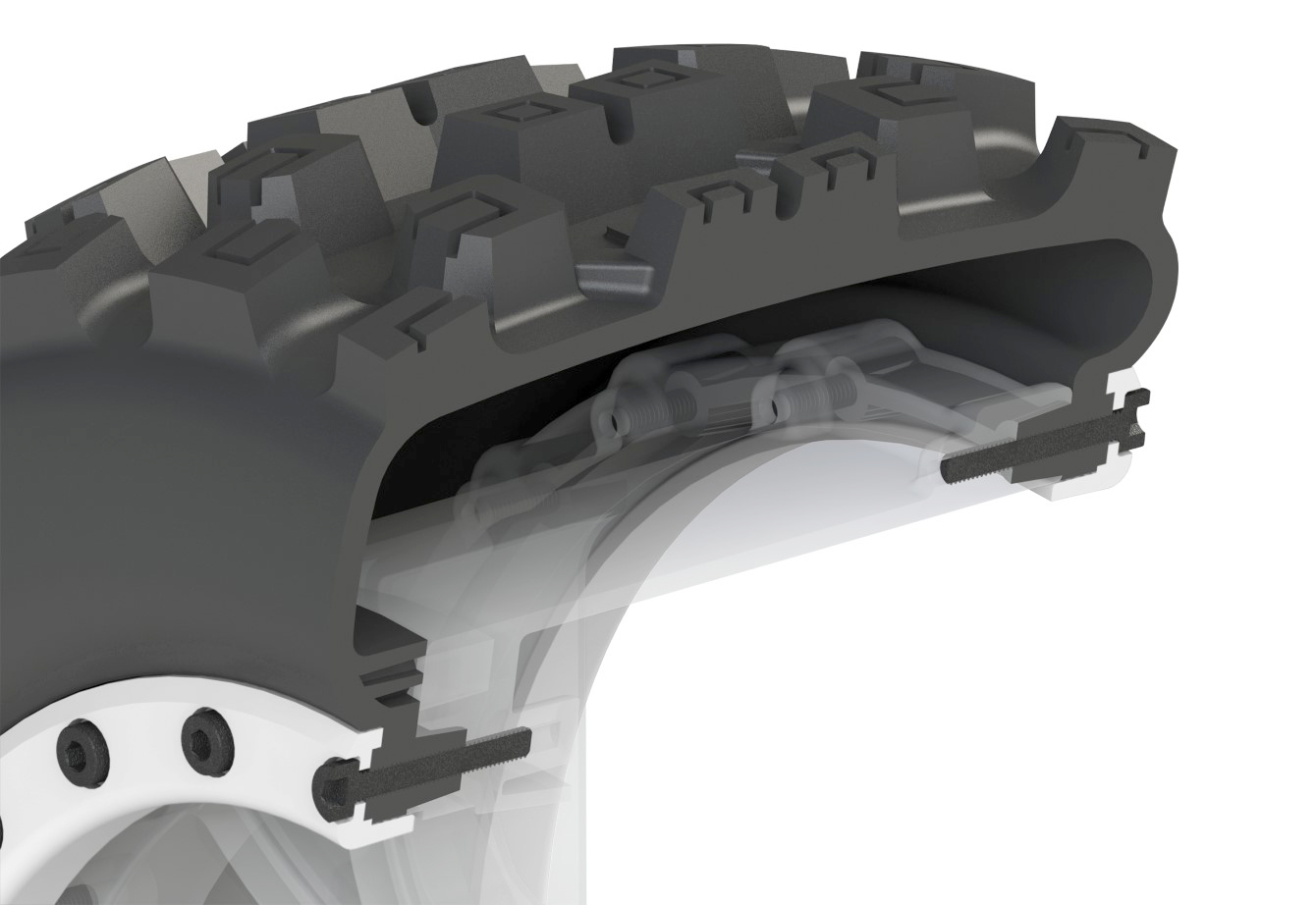 This cutaway shows how the Pro-Loc system works: the beads seat deeply in the rims and the screws go right through the rubber.

Testing
Compared to the stock X-Maxx tire, the Badlands tread has much wider lug spacing and a more “moto” knobby design instead of scale-ish interlocking tread shapes. I had no complaints with the stock tires’ off-road traction, but the Badlands seem to work better—especially if you measure performance by how well the tires throw roost. Those bog ol’ knobs move a LOT of soil, if you like to drive punched. If you prefer to keep things a little more under control, the Badlands oblige nicely with good side-grip to match their forward thrust, and offer highly predictable feel. I suspect a big part of that is the tires’ resistance to “ballooning” at high RPM. The stock X-Maxx tires expand significantly due to centrifugal force at speed, but the Badlands only grow slightly. The thicker rubber and extra hardware of the Pro-Loc system does come with a weight penalty of 10 oz. per each wheel/tire combo, and per the laws of physics, there is an effect on performance—but not one that I could feel. The X-Maxx still felt like a cross between a monster truck and a funny car, and the extra rotating mass didn’t seem to bother the suspension or drivetrain. If anything, it may have contributed extra “gyro effect” to improve handling. Just a theory. Not theoretical: the Pro-Loc system works. Nothing is peeling those tires off, and I bet you could even remove every other screw and not notice a difference in tire-holding power. 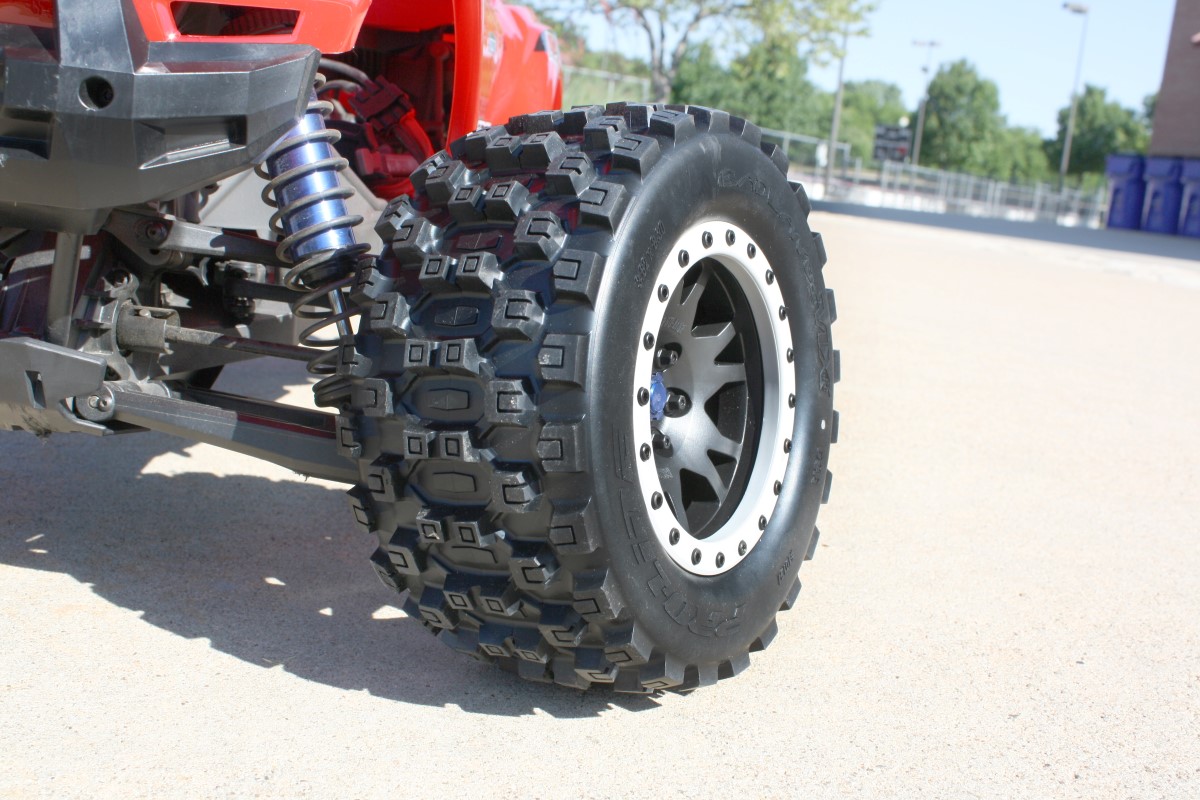 Looks tough. The big knobs move a ton of dirt, and the Badlands barely expand at high RPM.

Hat-tip to Evolution RC for the video.

2017 Ford F-150 Raptor Clear Body
Like all Pro-Line bodies, the big Raptor shell includes window masks, decals, and overspray film to help painting go smoothly. Bonus: Pro-Line also trims the body for you, so you can go straight to mounting after the paint dries. I used a single can of Duratrax paint to do the job, and the X-Maxx’s quick-release hardware bolts into place just like factory—with one slight mod. The holes in the rear window that allow the rear supports to pass through had to be enlarged a couple millimeters for proper fit. No biggie. As you can see, the body looks good even in just a single color, and the included decals dress it up nicely. I do wish there were decals for the window moldings though, which go a long way to making a body look “finished.” That said, it’s hard to ding Pro-Line for not including them, since no one else does either. After shooting the “supplied decals only” photos, I just dragged a black paint-pen around the windows to simulate a molding. It did the trick. 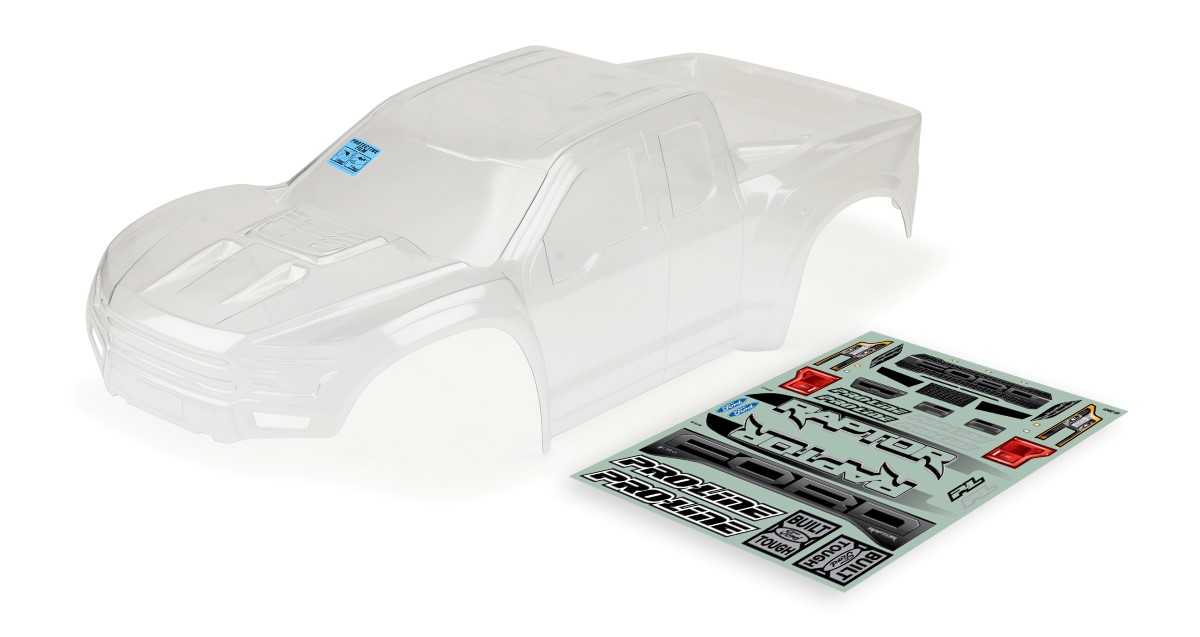 Pro-Line does the trimming for you (fist pump), and a full set of decals includes grille, lights, tailgate and logo details. 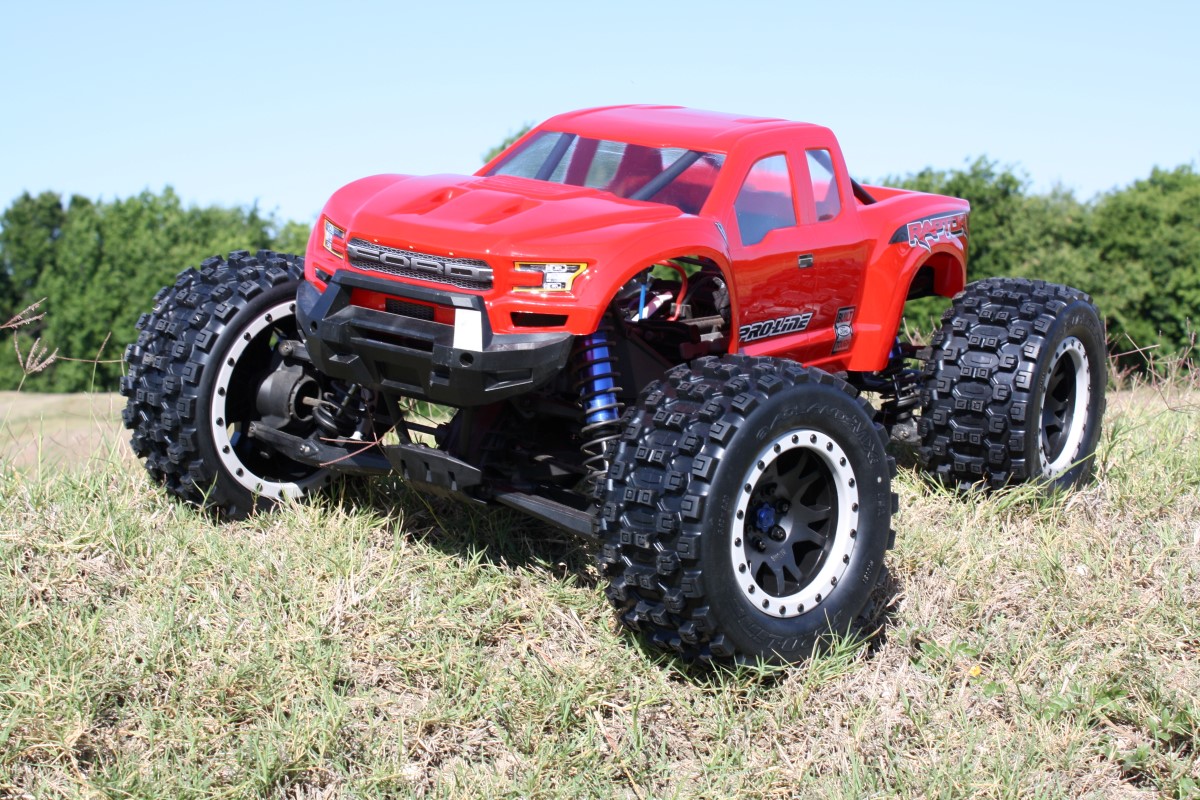 The Raptor body is a big, blank “canvas” for custom paint, but we shot the body in solid red to show what you’ll get with just a single-color paint job and the included decals. 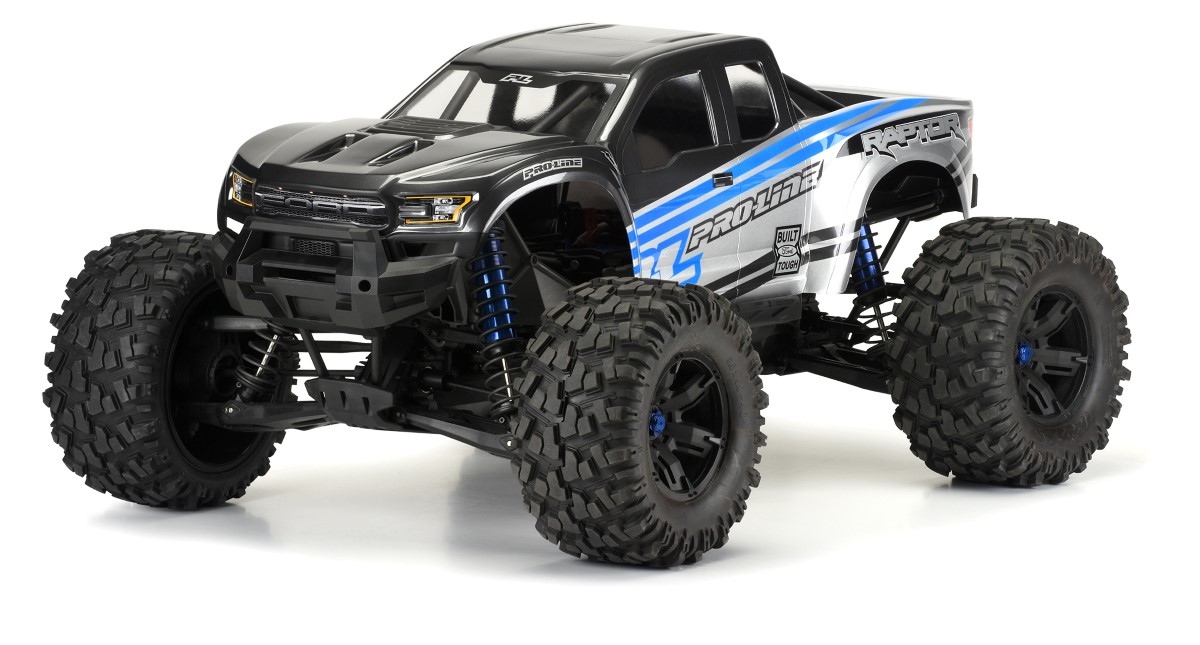 MINUS
– High-quality, top-performing stuff = not cheap

FINAL WORD
Pro-Line’s got another winner with the Impulse rim and Badlands tire Pro-Loc combo. Quality is top-notch, the setup delivers improved performance, and the Pro-Loc system is definitely not going to let go of those tires. And since there’s no glue involved, you can reuse the Impulse rims when it’s time for a new set of shoes (or if you want to try a different tread style—hopefully Pro-Line will offer more tires with the Pro-Loc bead). And the price? Well, you get what you pay for, and that means going Pro-Loc ain’t cheap. The price for one pair of mounted Impulse/Badlands is a nearly enough to cover a full set of the stock X-Maxx tires. Is it worth it? If all the Pro-Line setup did was look different, it would be hard to justify the cost. But there’s a lot more here than looks: the Badlands offer improved performance with reduced ballooning, there are no glue joints to fail, and you won’t have to toss your rims when it’s time for new tires. Worth it.