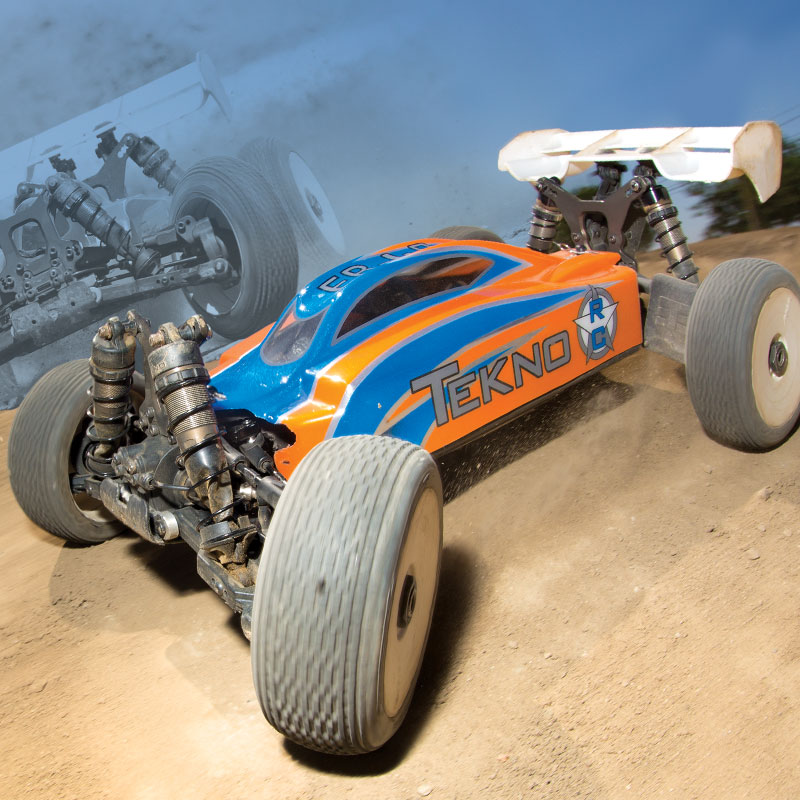 This ain’t no conversion kit

When you think of Tekno RC, your mind likely goes to brushless buggy conversions and driveshaft kits.  This “First Look” review focuses on a much more complicated project than a brushless conversion for an existing nitro 1/8-scale buggy.  The EB48 is Tekno’s very first full car kit—a vehicle designed from the ground up as an electric 1/8-scale buggy. According to Tekno’s website, there are three factors that dictate its products: fuction, durability and weight.  We spent a full afternoon with the Tekno crew at Revelation Raceway in Ontario, CA, to check out this buggy and then drive the wheels off of it.  Here’s what we discovered.

DRIVING IMPRESSIONS
After an extended photo session that tried the patience of Tekno’s eager driving team—they were itching to get the cars on the track and rip off laps—we began burning through LiPos and laying down the laps.  Although I didn’t get to drive the car nearly as much as I would like (stay tuned for a full review once a test sample is available!), I ran more than enough batteries to walk away impressed and a bit surprised.

The EB48 drives unlike any other converted nitro-to-electric buggy I’ve driven before, which makes sense considering the buggy is a brushless-only vehicle.  Under acceleration, the EB48 hunkers down and rockets away.  As a 7+ pound featherweight, the Tekno car feels light, nimble, and reactive on the track, but not nervous.  Revelation’s absurdly long rhythm/whoops section is known to trip up most buggies and get them off balance, but the EB48 charges through without so much breaking a sweat.  In fact, Tekno’s Daniel Lewis insisted that I drive through the whoops section at full throttle repeatedly.  Normally a recipe for a spectacular disaster and wreck, I punched the EB48 through the section and hoped for the best.  To my surprise (but not to Daniel’s), the buggy tap danced through the whoops like they weren’t there.  Heavy throttle fingers will appreciate the EB48’s long chassis, low overhang, and low CG design.

Steering on the EB48 can only be described as linear, smooth, and predictable.  During the first few laps, I found myself turning in too early and hitting corner pipes as I expected the car to push more than it did.  Its neutral to aggressive steering performance offered confidence and allowed me to drive more aggressively to the point of driving like a complete moron.

Naturally, with four vehicles on the track and the Tekno team drivers goading me to do whatever I wanted to the car in an attempt to break it, I gave the car hell.  During our test day, the EB48 showcased its durability.  According to the Tekno team, they had broken only a few parts during multiple months of testing, which made it all the more ironic when I landed awkwardly off a jump and snapped a suspension arm in a nasty wreck that would have likely sheared the entire front end off a standard buggy.  Apparently, I’m one of the lucky few who has “the touch” to break an unbreakable car.  On a 4S LiPo with a 1900Kv brushless motor, the EB48 feels like it could conquer any nitro buggy in its path, with a neutral, predictable handling character that makes it easy to drive.

NARROW CHASSIS
Because the EB48 is designed solely as an electric/brushless buggy, the Tekno designers were free of space constraints that most nitro buggies deal with. Place a brushless motor side-by-side with a 4S LiPo pack, and you’ll have an idea of how narrow the EB48’s chassis really is. At its widest point, the chassis with mud guards measures in at a scant 125mm (4.9 inches). This is a buggy that’s super narrow, low CG, and ultra compact with minimal chassis overhang. Even the center diff, which is compatible with Tekno’s Traktion Drive system, is positioned at the rear one-quarter of the chassis to improve weight distribution.

OIL SHOCKS
The unique narrow/long chassis and suspension design demands ultimate performance from the damping system, so Tekno goes with big bore, 16mm diameter shocks (2). Depending upon the racing surface and your preference, the Tekno shocks may be configured as standard pressurized, emulsion, or vented cap/bladder units.  Long travel shocks and suspension arms offer incredible suspension travel and bump handling.

UNIQUE DRIVE OPTIONS
The EB48 offers two different drive options of your choosing.  A standard pinion gear/center gear differential setup is standard, with provisions for Tekno’s “Traktion Drive” Elektri Clutch system (essentially a nitro-style clutch system). Tekno says that the clutch system offers less punch and increased traction when compared to a direct pinion/center diff power delivery.  No extra chassis parts are required for this option, minus the Traktion Drive unit itself.  The EB48 has an option for servo-actuated mechanical brakes (with front/rear adjustable bias) using the servo mount located behind the battery tray (3).

ELECTRIC FROM THE GROUND UP
Unlike almost every other brushless vehicle on the market that was converted from a nitro buggy, the EB48 began its life from day one on a clean design sheet as a brushless buggy.  As a result, the Tekno buggy offers unique features not found on converted nitro vehicles.  For example, an integrated battery tray/mud guard mates to unique chassis cutouts, which positions the vehicle’s battery at the lowest point possible

LIGHTWEIGHT DESIGN
As part of Tekno’s mantra, the EB48 represents a near-obsessive attention to vehicle weight and weight distribution.  Outfitted with standard electronics, the buggy weighs in at around only 7.5 pounds (3,400 grams), while according to Tekno, a sub-seven pound running weight is “easily achievable.” In racing, reduced weight equals quicker acceleration, faster left/right transitions, faster braking and improved overall lap times.

WRAP-UP
I’m excited to build and race an EB48 test sample in the near future. Tekno is proud of its creation, and judging from the brief few hours I spent with the car, they should be.  The brushless 1/8-scale racing class hasn’t exactly set the world on fire up until now, but perhaps the class simply needs more purpose-built vehicles like the EB48 to create interest in the class.  We are eager to watch the class closely, and in the meantime, I will be daydreaming of blasting through Revelation’s whoops section at full throttle, every time, without wrecking.