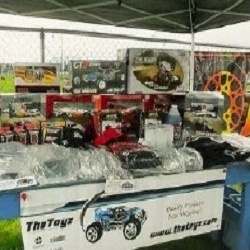 Tekin’s Charity Food Race was held on April 29th at Skag It River Raceway in Burlington, WA and was a great success as they raised $1,644.00 for the Alger Food Bank and a Half an F150 truck load of food. Amy Berryman who has run the Food Bank for 28+ years was so shocked at the amount they raised and so happy she actually cried. Two radio stations were running announcements about the race. Tekin also had two newspapers at the event to cover the race and recap the event the next day. One was the Skagit Valley Herald and the other was a small free paper associated with the Herald called the Argus. Between the two Tekin was able to reach 10’s if not hundreds of thousands of people. Tekin did a great job bringing awareness to the foodbank and to the club.