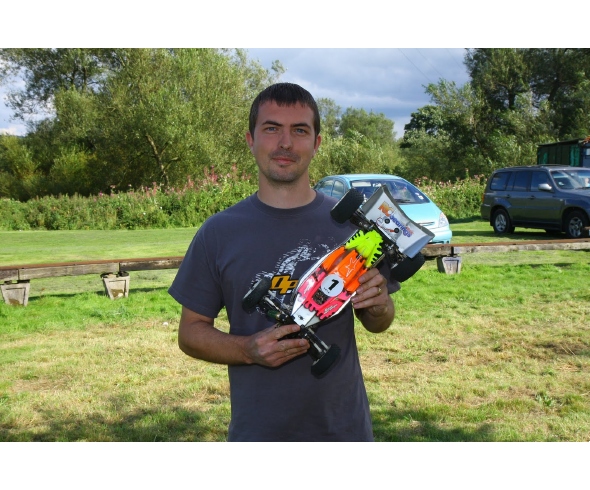 Sunday the 22nd of August was the last round of the BRCA North West Regional Championships held at the Keighley Model Car Club venue.

This was the Keighley clubs first regional, with the track being laid out on 99% grass with one tricky large Astroturf double jump feature. The track looked a fairly simple layout, but the hard backed soil under the grass would soon poke through and make the track much more challenging.

Graham North was “living the dream” in qualifying to take TQ in all four rounds even with the track deteriorating throughout the day. His Tekin RS Pro and 6.5 Redline motor giving him excellent control of his Durango DEX410 on the increasing difficult track. Fellow Tekin driver Stuart Evans would line up 5th on the grid with round scores of 5,4,5,4.

Graham led from the buzzer and gained a small lead while battle commenced behind. A charge from Gavin Crolla saw him move up to 2nd place on lap 4, but with Graham regulating the gap it looked safe at the moment, Gavin was catching Graham but only slowly. On lap 10 Graham came upon a big group of back markers and although they did their best to get out of the way the challenging track conditions meant he got bumped about loosing over 5 seconds in the process. Gavin was right on Graham now, and pulled an overtaking move on the downslope of the double jump to take the lead over the line at the start of lap 11. A small bobble on the next lap allowed Graham to seize the lead again, with Gavin right on his gearbox. A small error on the next lap by Gavin gave Graham a little breathing space, eventually keeping it on its wheels to cross the line the winner by just over 2 seconds. Stuart Evans brought his Tekin powered Predator home in 5th place.

Grahams late championship charge of 2 wins and a TQ means that at the end of the series he finished 2nd overall.

Thanks to Stuart Evans for the pictures.