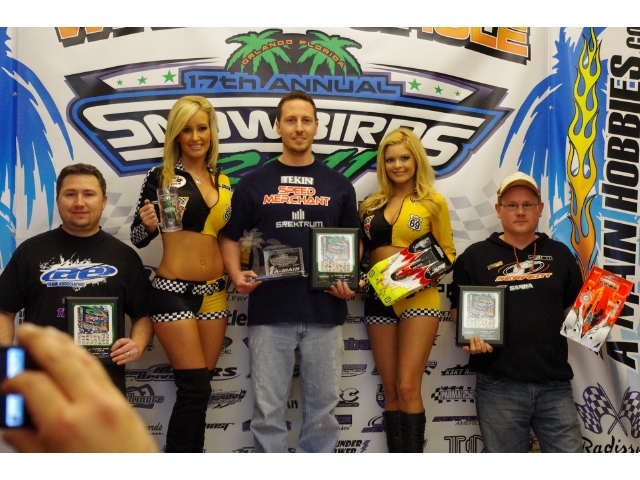 Team Manager Randy Pike reports on his 1st trip to the Snowbirds and Tekin’s dominating perfomance.

This was to be my first ever Snowbirds Nationals. I must admit that I was going in a little intimidated. Racing from 5am until after midnight on some nights sounded a little crazy to be honest. However once I showed up late Monday evening I felt a lot better. I got no sleep the first night as I was far too excited to hit the track with 2 cars I’d never driven. My WGT was not ready nor was my TOP TC ride for the weekend. I spent the first round making sure the team had what they needed to hit the ground running. Round 2 was up sooner than I expected however EJ Evans from TOP made sure I was ready to run. Having no local racetracks with carpet let alone carpet with this much bite made for a very steep learning curve. Luckily for me I was running blinky stock and already knew the right ratio for the Tekin Redline 17.5 I was using.

Qualifying began with the track slowly but surely getting more and more traction. People started traction rolling and having tight cars. Lucky for me EJ Evans from TOP Racing was there to keep me on the right path with my TOP TC rent a ride. My WGT car was expertly wrenched on by fellow Speedmerchant drivers Tim, Joel, and Steve . This allowed me focus on the team. Thanks guys!

Clearly the Tekin RS/RS Pro was the speedo of choice for nearly every class tq’ing all classes except Mod Tc and Mod 1/12 GTP.

Mains Day was here sooner than we knew it. The team was set to back up their Tq performances and win some hardware. First up was WGT with Josh Cyrul as Tq followed by Tekin Team Driver Mike Dumas. Josh would get a great start. For the first few laps Mike Dumas would slowly inch up on Josh lap after lap. He would get very close to Josh as they both started coming up to traffic. Both would get through cleanly however Dumas would tap allowing Josh to walk away leading from tone to tone.

1/12th GTP 17.5 would come to be known as 1/12th Blinky. This was a very exciting race to watch. Andrew Knapp would start from the pole and lead the entire race. Ej Evans though was not to be denied and pushed hard to catch Andrew. Kenny Lambert would also challenge for position with Ej. Kenny and Ej’s battle would slow them down enough to allow Andrew to walk away with this one.

Stock Touring a.k.a Blinky Stock would be Tq’d by Tekin Team Driver Eric Anderson. EA laid down some of the fastest laps of the weekend in this class with this Tekin Powered X-ray. Eric however would get blasted on the first turn dropping him all the way to the back of the pack. The luck would be found by Austin Harrison and Dustin Lane. These two got away the cleanest and would battle for the top spot for the rest of the race. Dustin put on a late charge but would tap allowing Austin to take the win.

Expert TC ran 17.5 boosted at this event. Tq Mike Haynes would get out in front early from his pole position and never look back. The battles would be from 2nd on down with the rest of the pack fighting for podium spots.

1/12th GTP 13.5 Expert class would see Andrew Knapp on the pole. Tekin Team Driver Mike Dumas sitting 2nd in his Tekin Powered Speedmerchant Rev 6 would be on Knapp’s bumper right off the bat. Mike’s constant pressure would eventually crack Knapp allowing for a great passing opportunity. Andrew would battle back and the pair would race down the straight away. Dumas had the inside line with Knapp on the outside one of the most exciting races of the day. Andrew would come down onto Dumas leaving him no choice but to hold his line. The two collided in one of the biggest off track incidents of the weekend! Dumas would come out the best landing on his tires and blasting back into the race. Knapp would fall back never to return to the top 3. This allowed Dumas to get back out and run on his own or so we though. Mike Blackstock would come out of seemingly nowhere to catch up to Dumas but would run out of time. Mike Dumas would take the win.