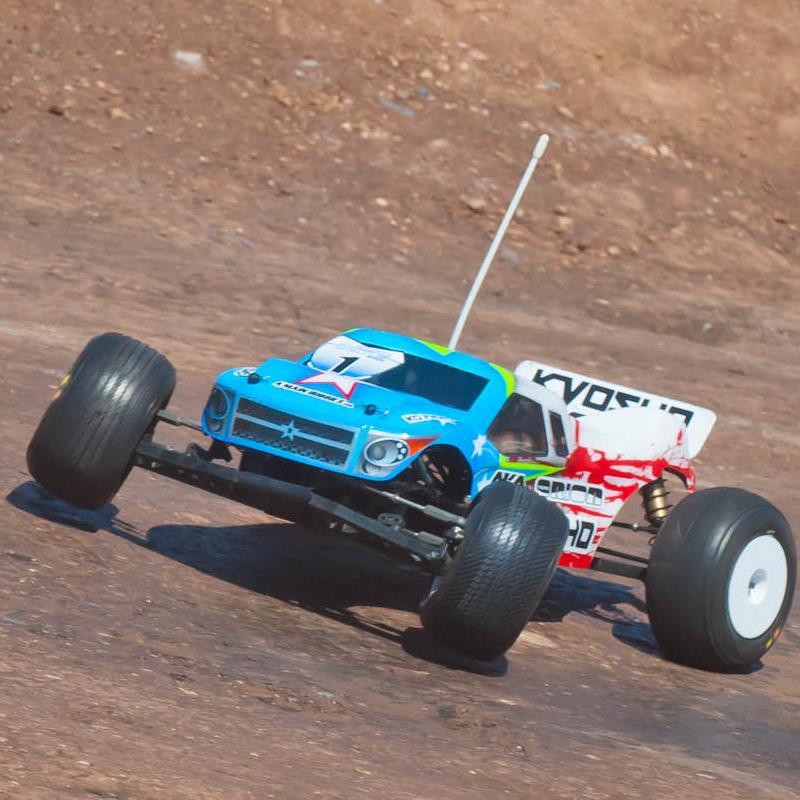 For the first time in its 28-year history, Day Two of the Cactus Classic featured B-Main Last Chance Qualifiers for the modified 2WD and 4WD buggy divisions – and the winner of each “LCQ” bumped up into tomorrow’s triple-A Mains to race for the final championship trophies awarded here at Scottsdale R/C Speedway. Before those races could happen, however, the final order had to be set after two more rounds of qualifying – and unlike yesterday, luckily, there wasn’t a cloud in sight.

Modified Stadium Truck
Jared Tebo locked up the overall TQ with his third straight round win, swapping the top spot twice in the first three laps with Ryan Cavalieri before speeding off to the fastest lap and a three-and-a-half second cushion – Tebo commented last night that he thought a 14-lap run was possible, but he’ll have to wait for his final chance this afternoon. Billy Fischer rebounded from a crash on lap two, which dropped him to seventh, and clawed back ahead of Tanner Denney and a struggling Jörn Neumann to finish third for the round another three and a half seconds behind Cavalieri. 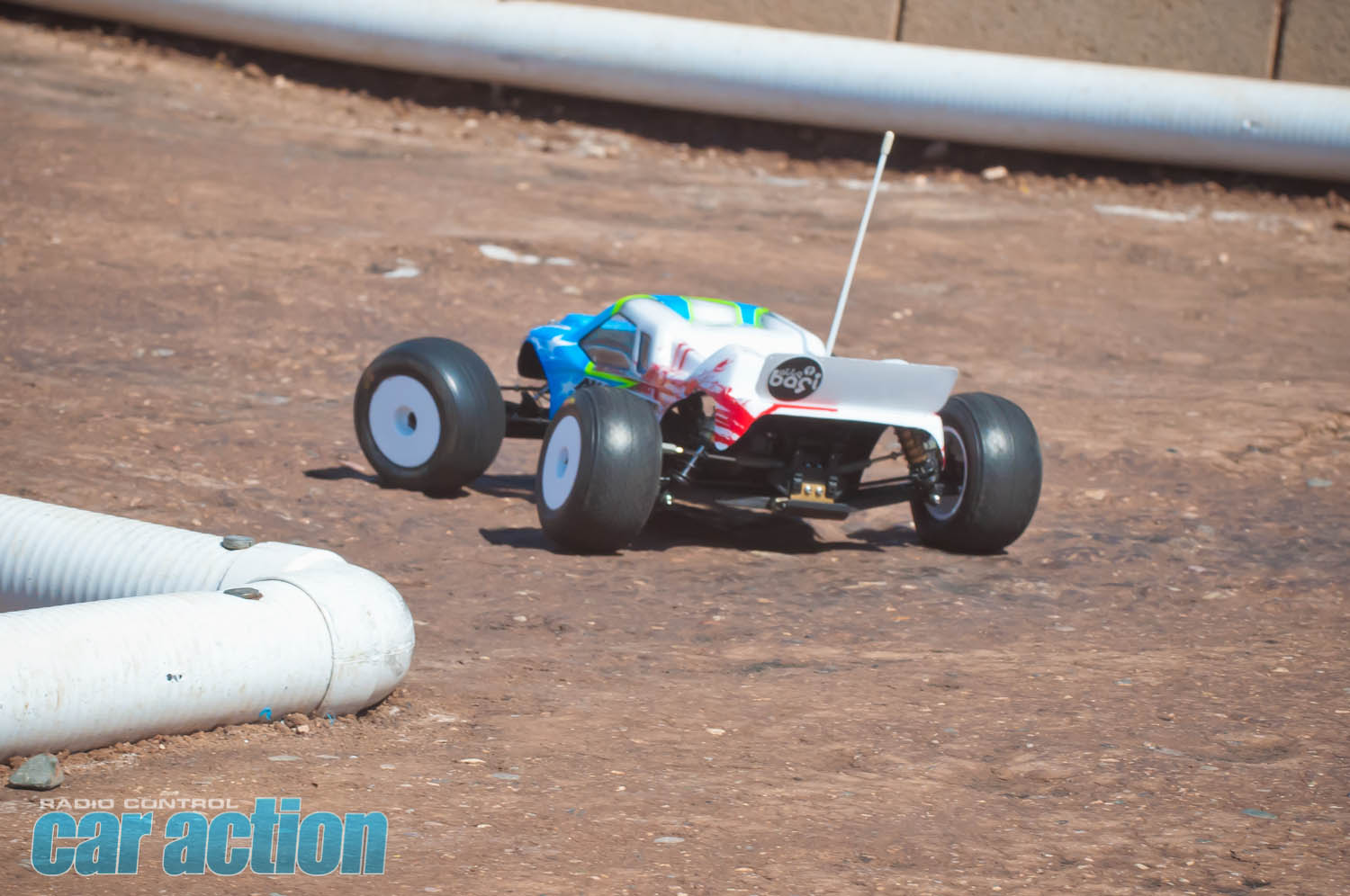 If neither Neumann nor Cavalieri can get to Tebo early in Sunday’s A-Mains, this may be the only view they’ll see of Jared Tebo’s Kyosho RT6. 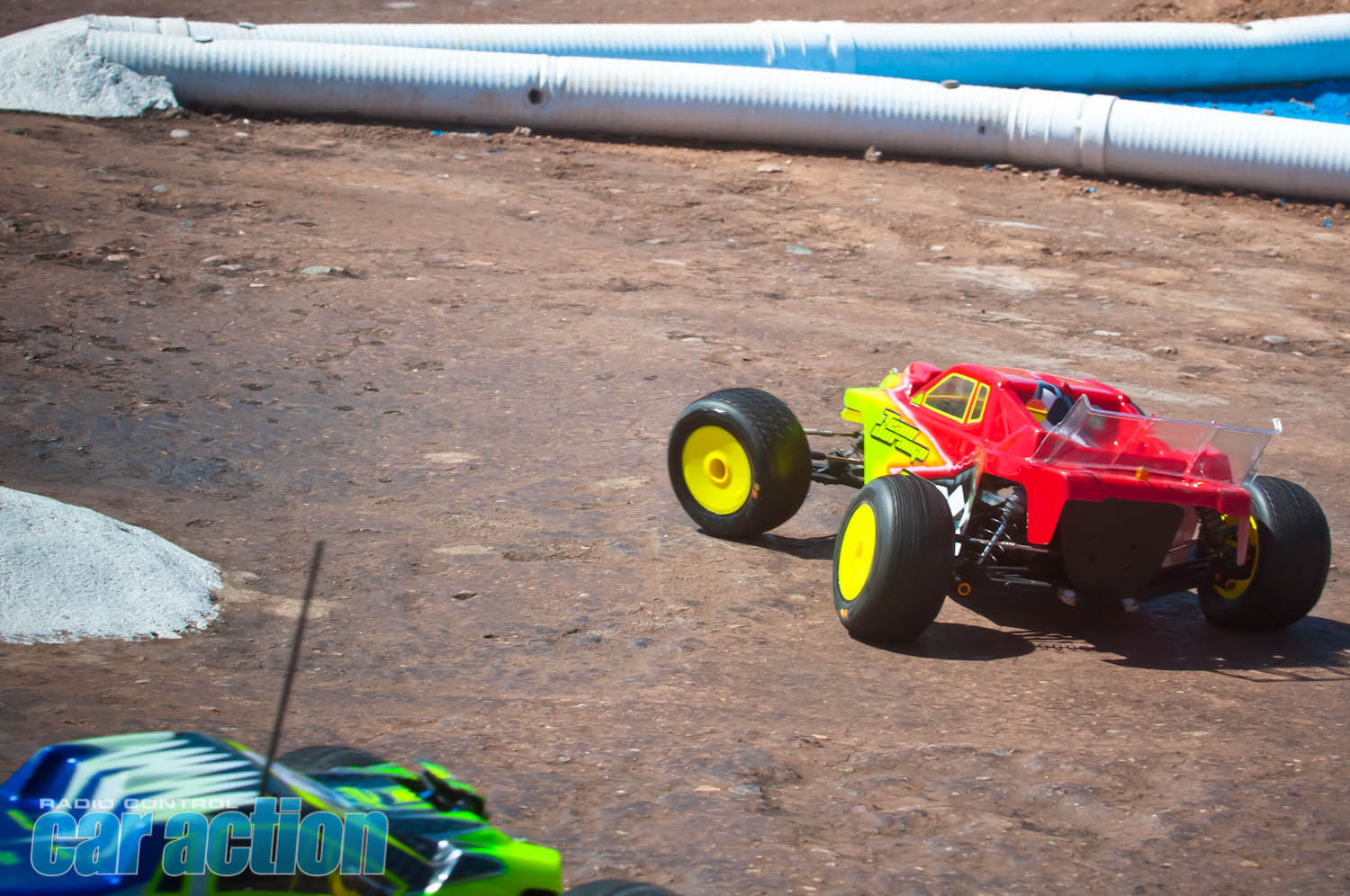 Jörn Neumann may not run Stadium Truck very often, but this is the second year in a row that he’ll be among the contenders for the Cactus Classic championship.

Tebo completed the sweep of Modified Stadium Truck, though he didn’t quite hit the 14-lap mark that he thought was possible. The closest competition he’s had all weekend came not from former winner Ryan Cavalieri, who finished third, but last year’s runner-up Jörn Neumann – the German driver competes in Stadium Truck once a year, at the Cactus Classic, and came within less than a half second of stopping the sweep. Cavalieri was just 15-hundredths further back, though Neumann’s finish earned him second overall; if Neumann and Cavalieri can stay close to Tebo, the triple-A Mains in this class should be incredible! 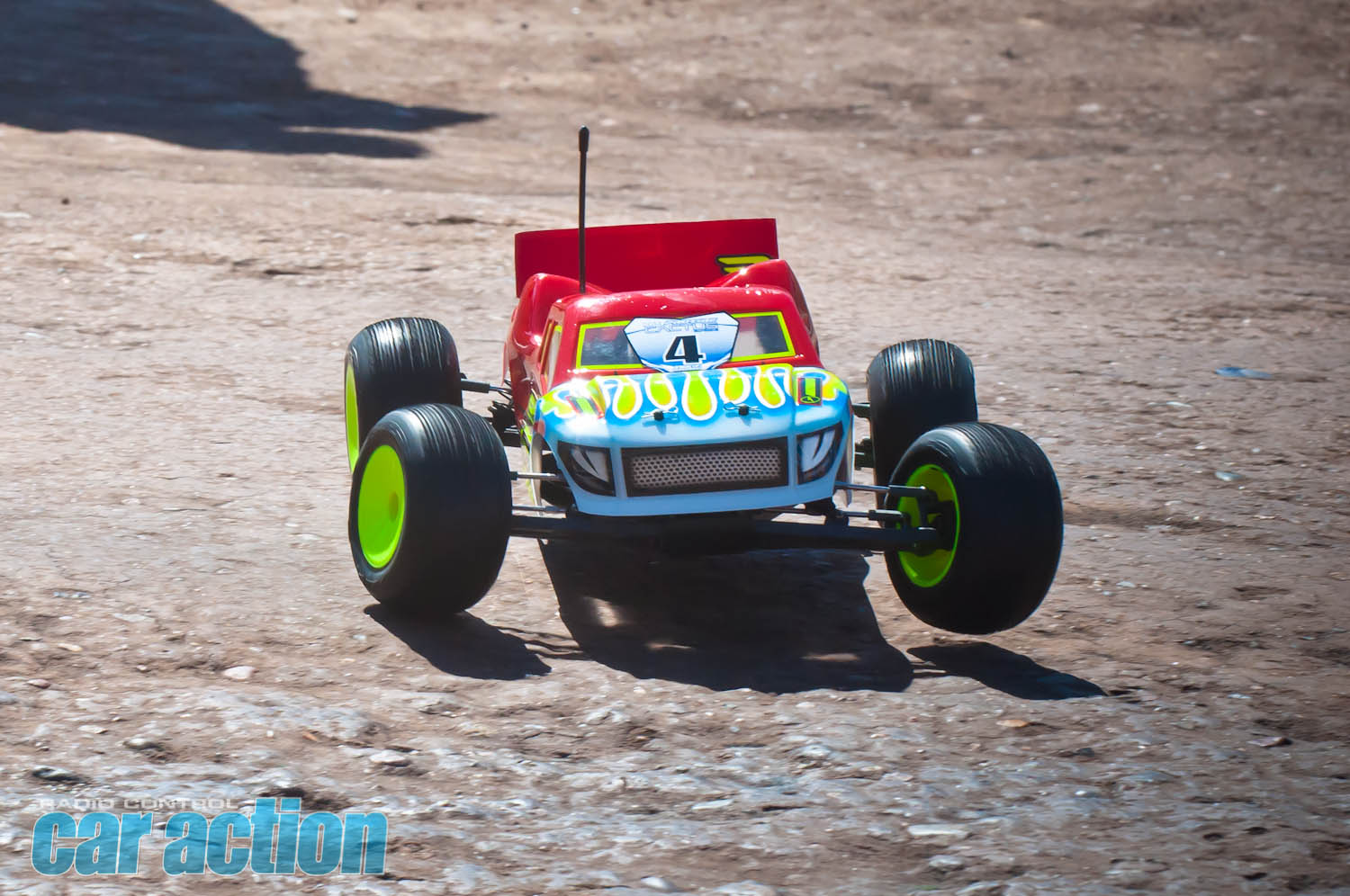 Ryan Cavalieri is a threat to win every race he enters. Can be challenge Tebo on Sunday? 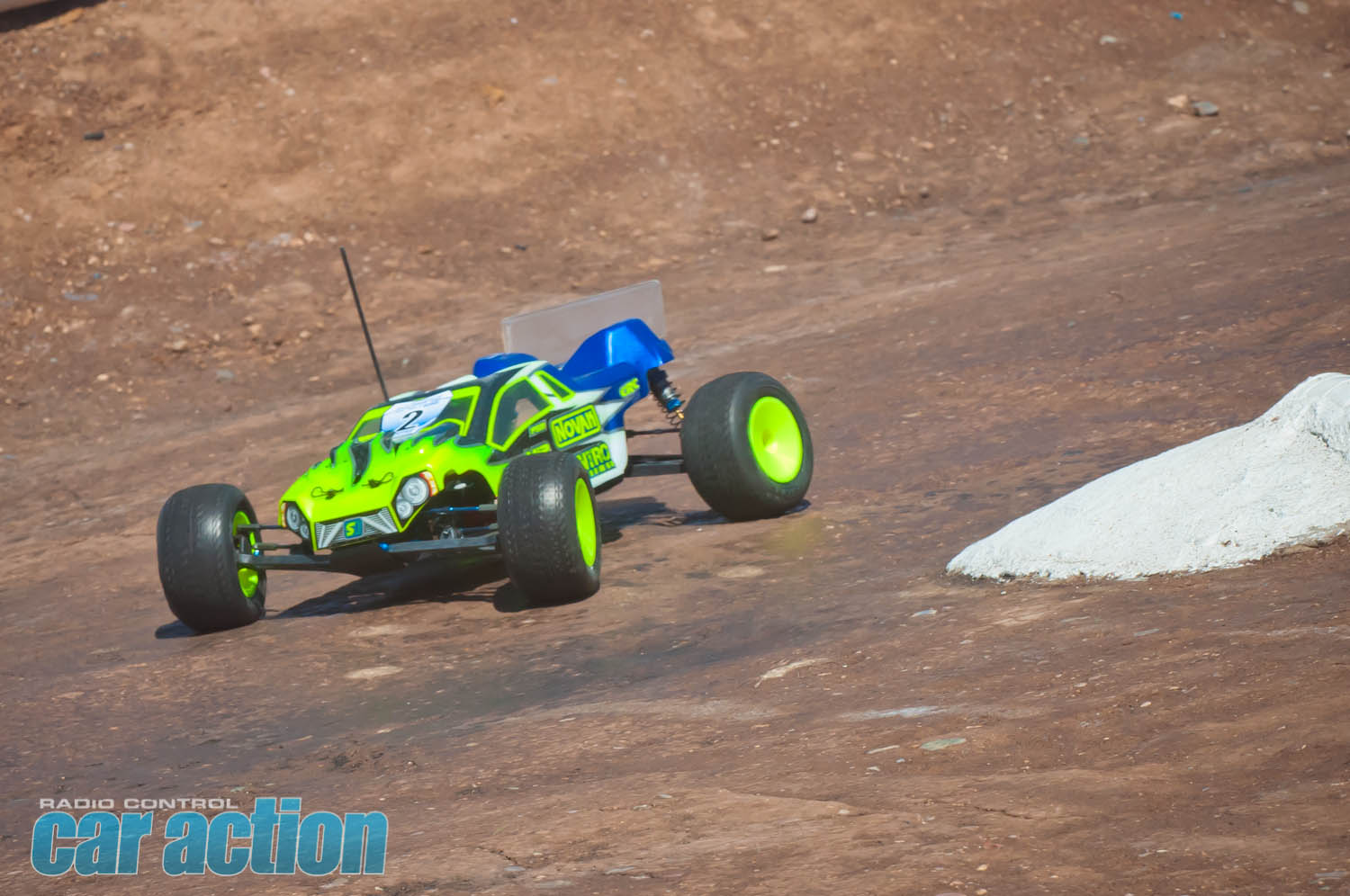 Don’t let the 22T body fool you – Billy Fischer’s truck is a mid-motor Centro conversion for the T4. He’ll start 4th on Sunday.

Modified 2WD Short Course
The ‘Ryan and Ryan’ show in 2WD SC continued in round three with Team Associated teammates Ryan Cavalieri and Ryan Maifield once again out front, though a hot start from TLR’s Chris Wheeler and Kyosho driver Cody Turner in the first couple of laps that knocked Maifield down to fourth was all of the gap that Cavalieri needed – he led the entire race and finished two seconds up, despite Maifield turning a faster lap. Both Wheeler and Turner struggled through the rest of the run, allowing young Arizona native and Reedy Race Open 4WD champion Spencer Rivkin to move up to third and the only Team Durango truck in the field, driven by Travis Amezcua, up to fourth. 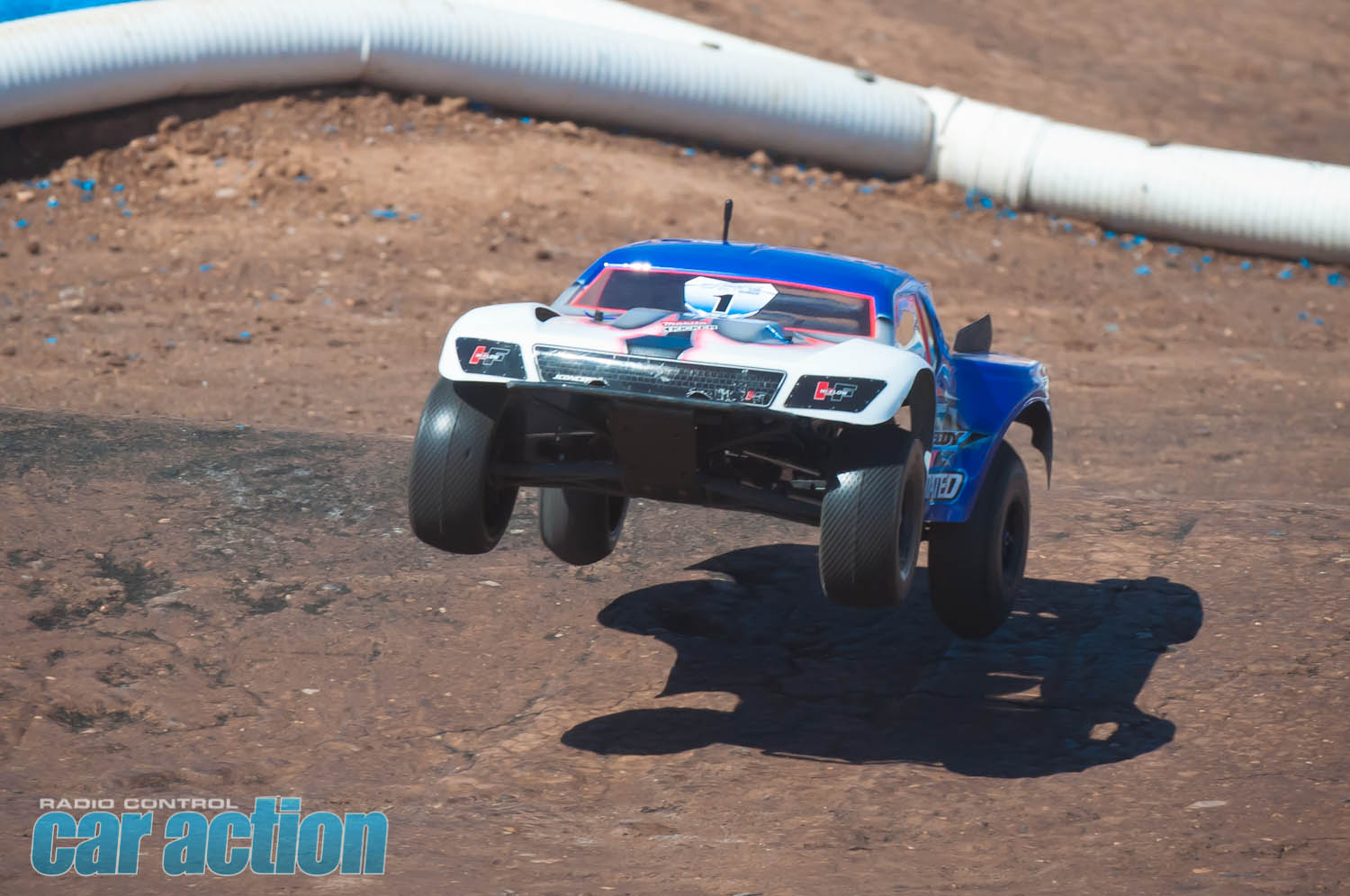 Ryan Maifield is one of the most successful short course racers in the history of the class, but he’s going to need to pull off something special to beat his teammate. 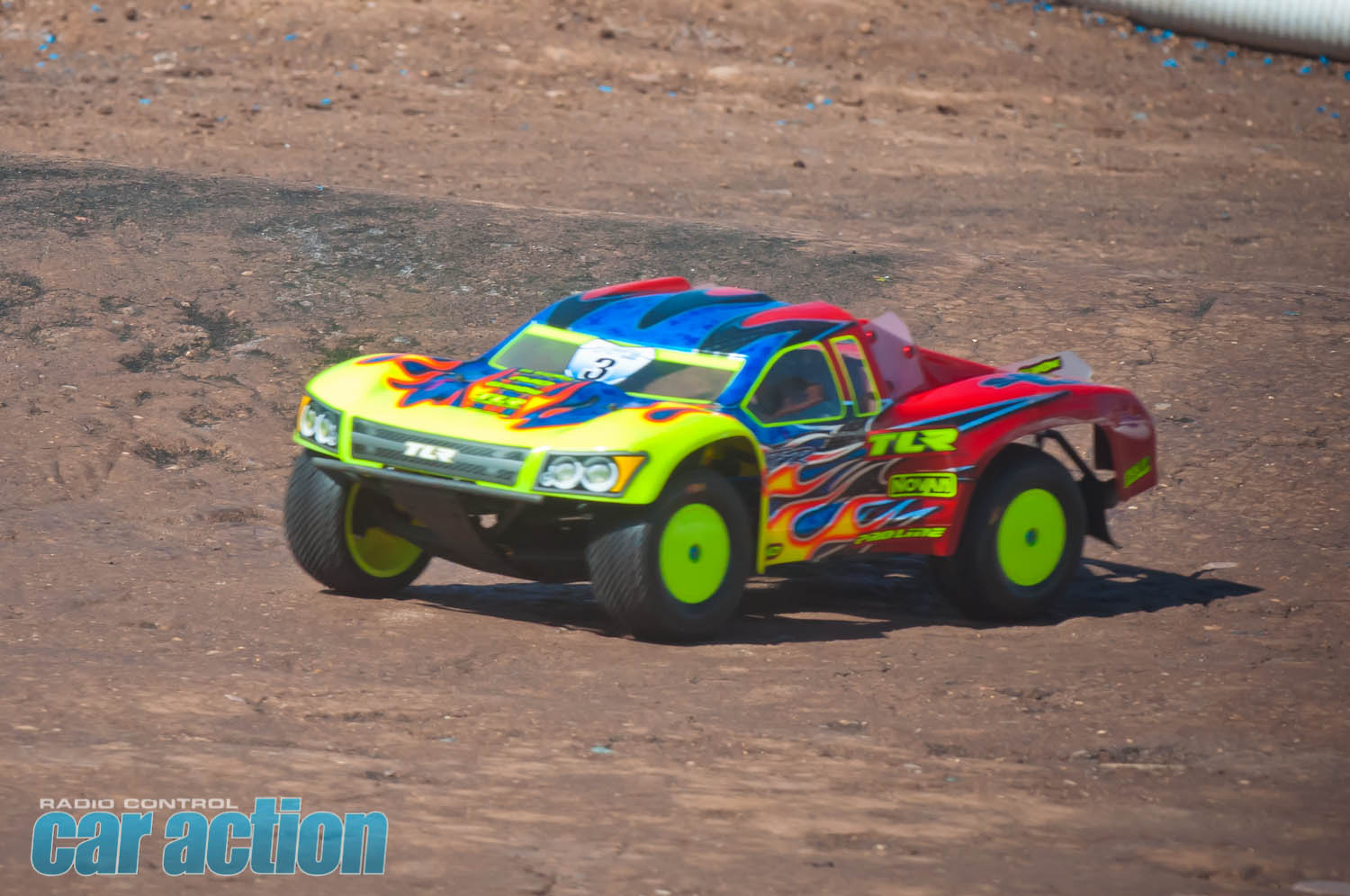 Chris Wheeler has made the best of his home-track advantage, and may be TLR’s best chance for a podium finish in 2WD Short Course.

After setting TQ in the second round yesterday, Ryan Maifield needed to win the fourth round with a time fast enough to beat Ryan Cavalieri’s combined mark from the first and third rounds in order to secure the overall. The two drivers swapped positions a few times throughout the race, but Maifield made a mistake with less than a minute to go to hand the overall TQ honors to his teammate. Cavalieri finished 1.3 seconds ahead of Maifield as the only two drivers to complete a 13-lap run in the final round, with Team Durango’s Travis Amezcua finishing third over TLR teammates Dustin Evans and Chris Wheeler. 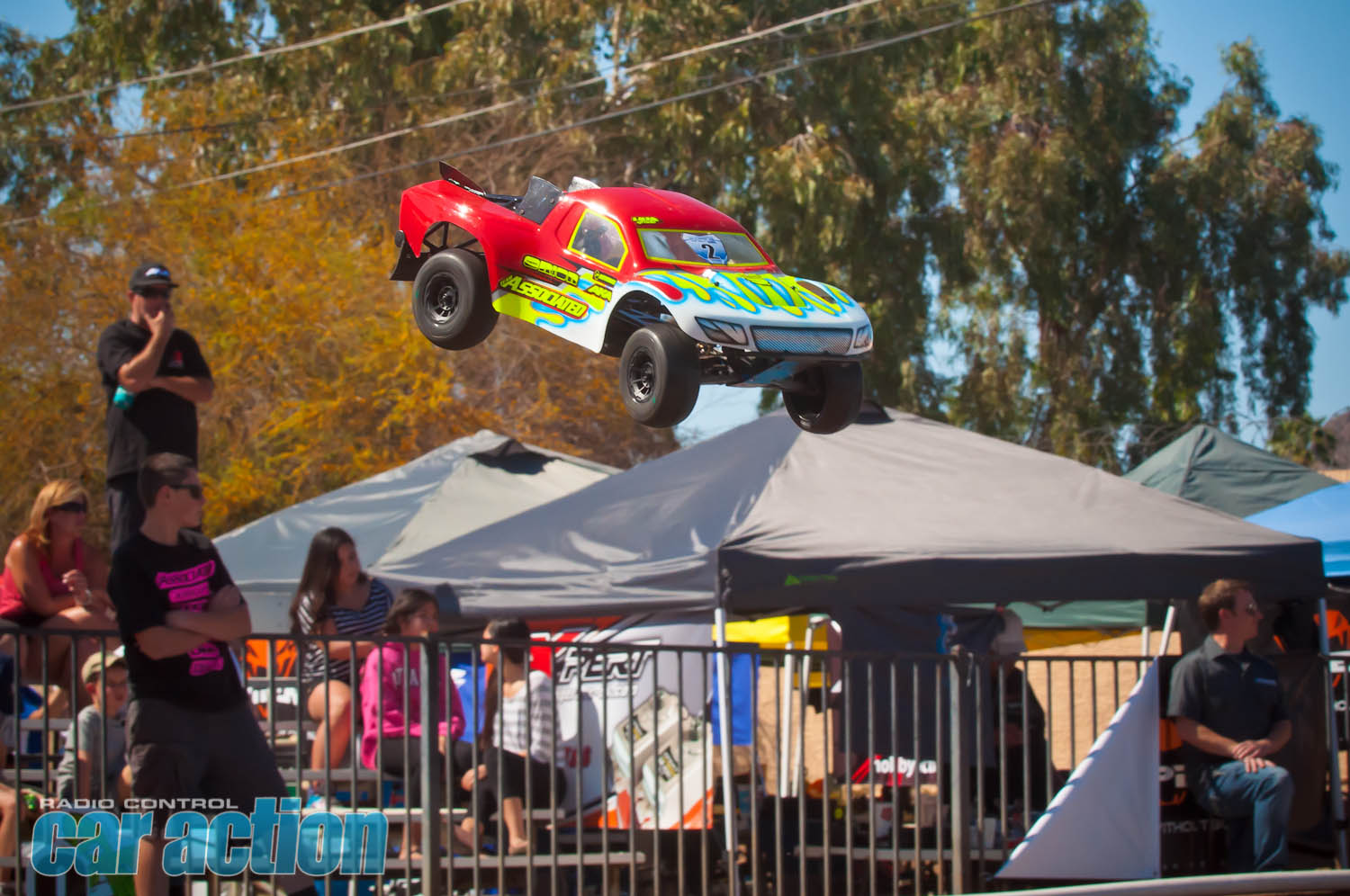 Will Ryan Cavalieri soar over the Short Course class for the second year in a row?

Modified 4WD Buggy
Former Cactus Classic class winner Ryan Cavalieri stepped up after a slow second lap to take the early lead in the penultimate round of 4WD buggy, only to suffer a slight drivetrain failure just after the three minute mark and leaving him to limp home outside the top 30 overall. Jared Tebo also recovered from a slow start and worked his way into position to capitalize on Cavalieri’s misfortune, holding off Ryan Maifield by just a half-second to grab the round win. In contrast, Dakotah Phend started off the race with three great laps to take the early lead before dropping to fifth after a wreck on lap four – it took him until about the four minute mark to work his way back into third. 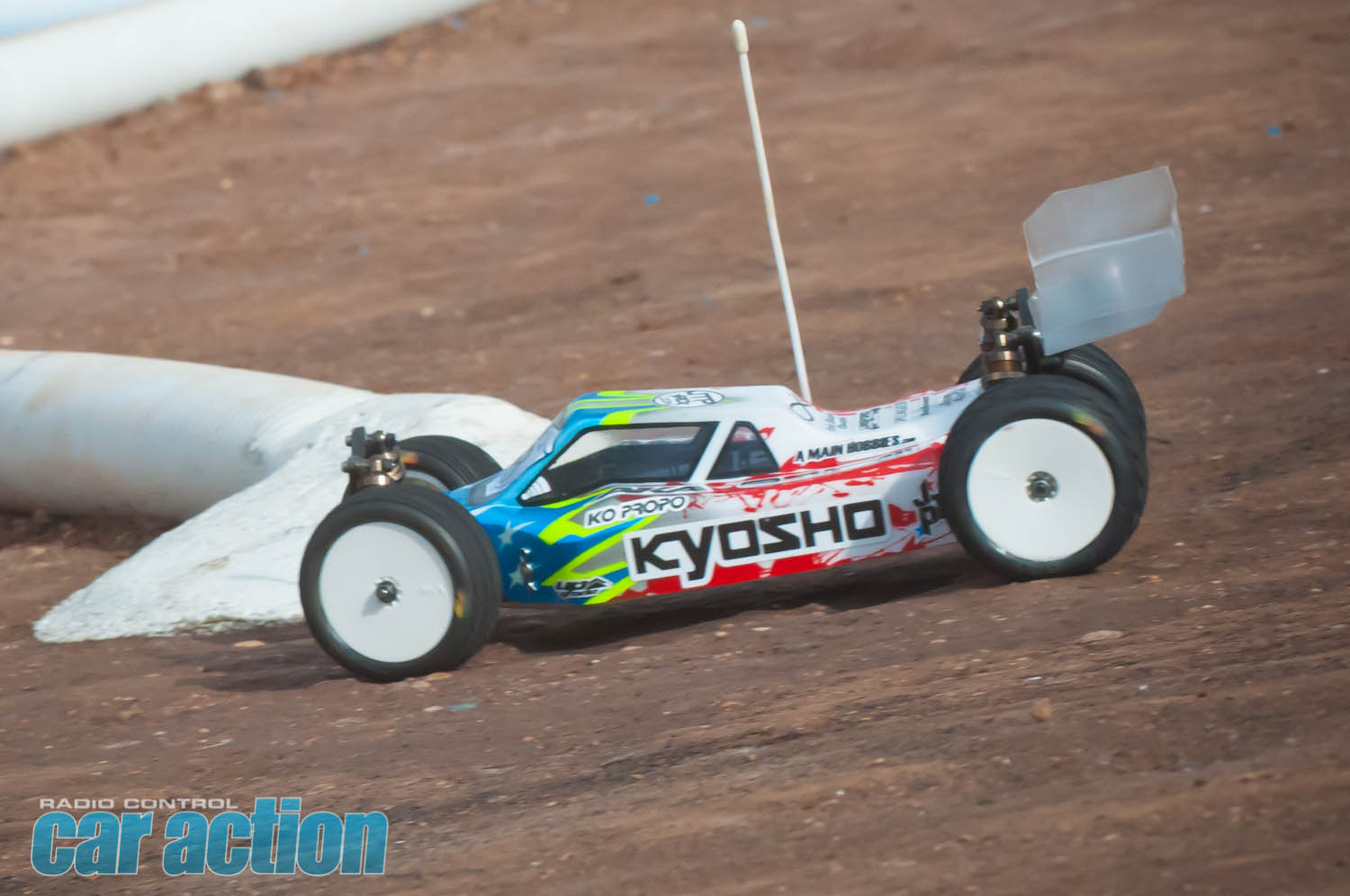 Qualifying second overall, via his TQ in round three, is Jared Tebo’s best success to date with Kyosho’s new ZX-6.

TLR’s Dakotah Phend finally broke through in 4WD buggy to TQ a round with the new 22-4, in its Cactus debut, with a clean wire-to-wire victory in which he led every lap. The victory prevented Jared Tebo, who finished just over a second behind, from having a chance at earning the overall TQ as he needed to win the round with a fast enough time to win the tiebreaker. Instead, Jörn Neumann, who finished two seconds after Tebo, was guaranteed the front spot on the starting grid by virtue of his incredible showing yesterday. 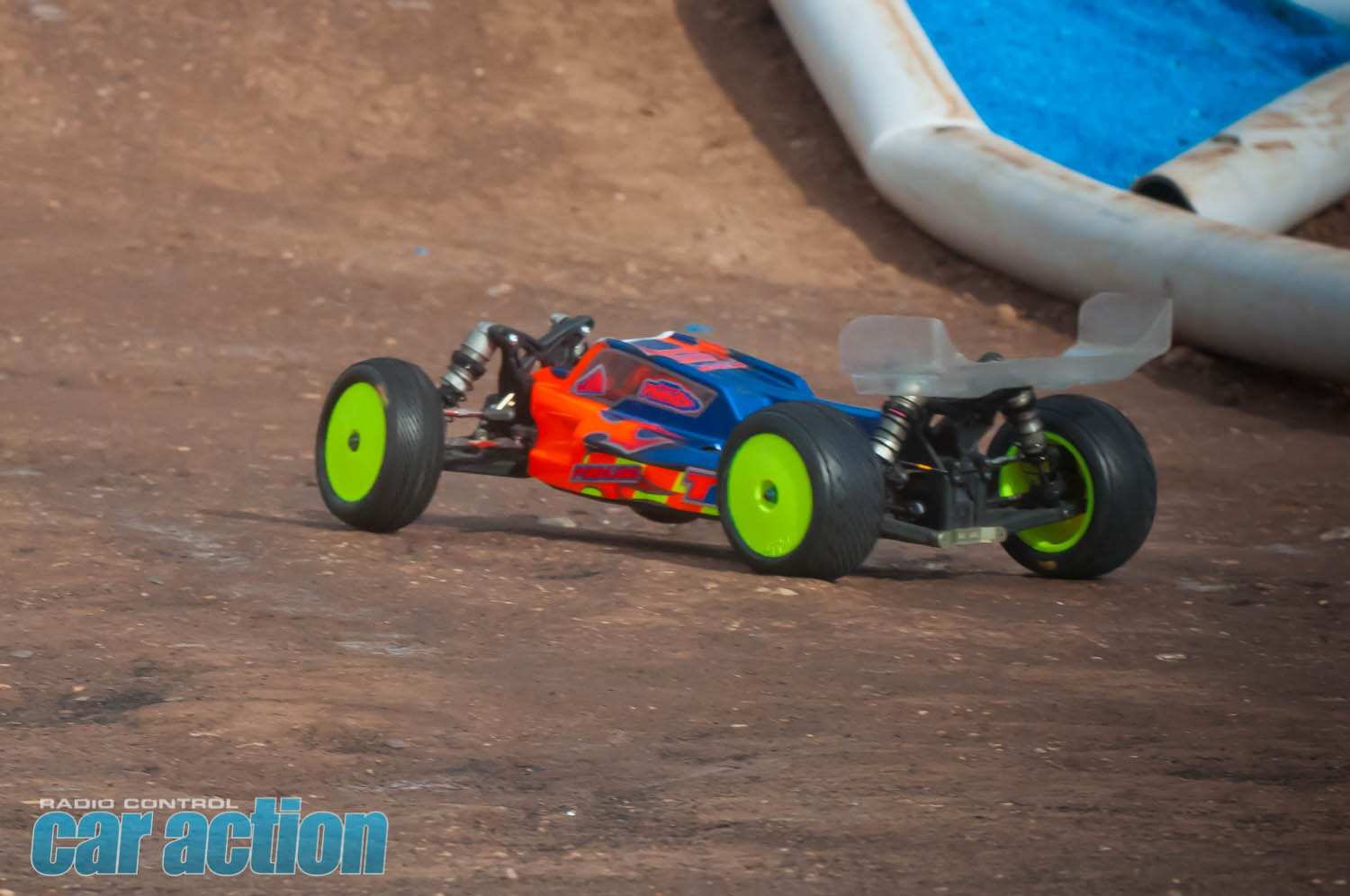 Dakotah Phend debuted TLR’s new body for the 22-4 in style, TQing the final round and starting in the front half of the grid. 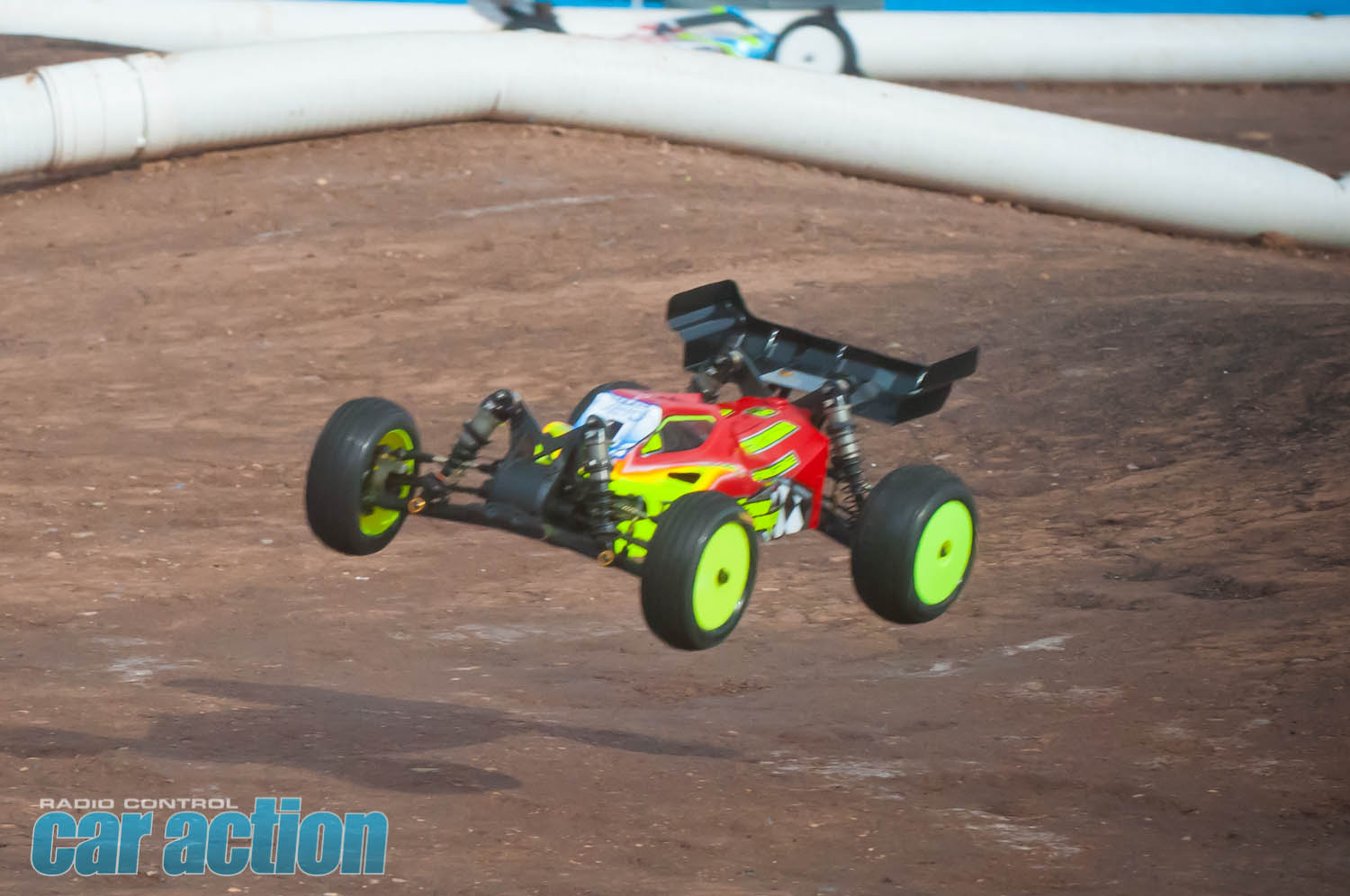 Jörn Neumann killed the 4WD class on Friday but didn’t show the same speed on Saturday. What will happen to him on Sunday?

4×4 Short Course
The battle between Dakotah Phend and Ryan Lutz for the third round TQ in 4×4 Short Course was closer than the final times make it look, as the pair swapped the lead a few times throughout the five minute run. Ryan Lutz turned the only sub-22 second lap of the heat around the 3:30 mark as he tried to become the third different winner in as many rounds, but Phend pulled away to win by nearly three seconds. Last night’s round TQ Jörn Neumann bobbled too many times to contend for the win, and didn’t make it by for a 14-lap run, but still managed to finish third ahead of TLR’s David Jenson, who edged Neumann’s Durango teammate Travis Amezcua by just 15-hundredths of a second! 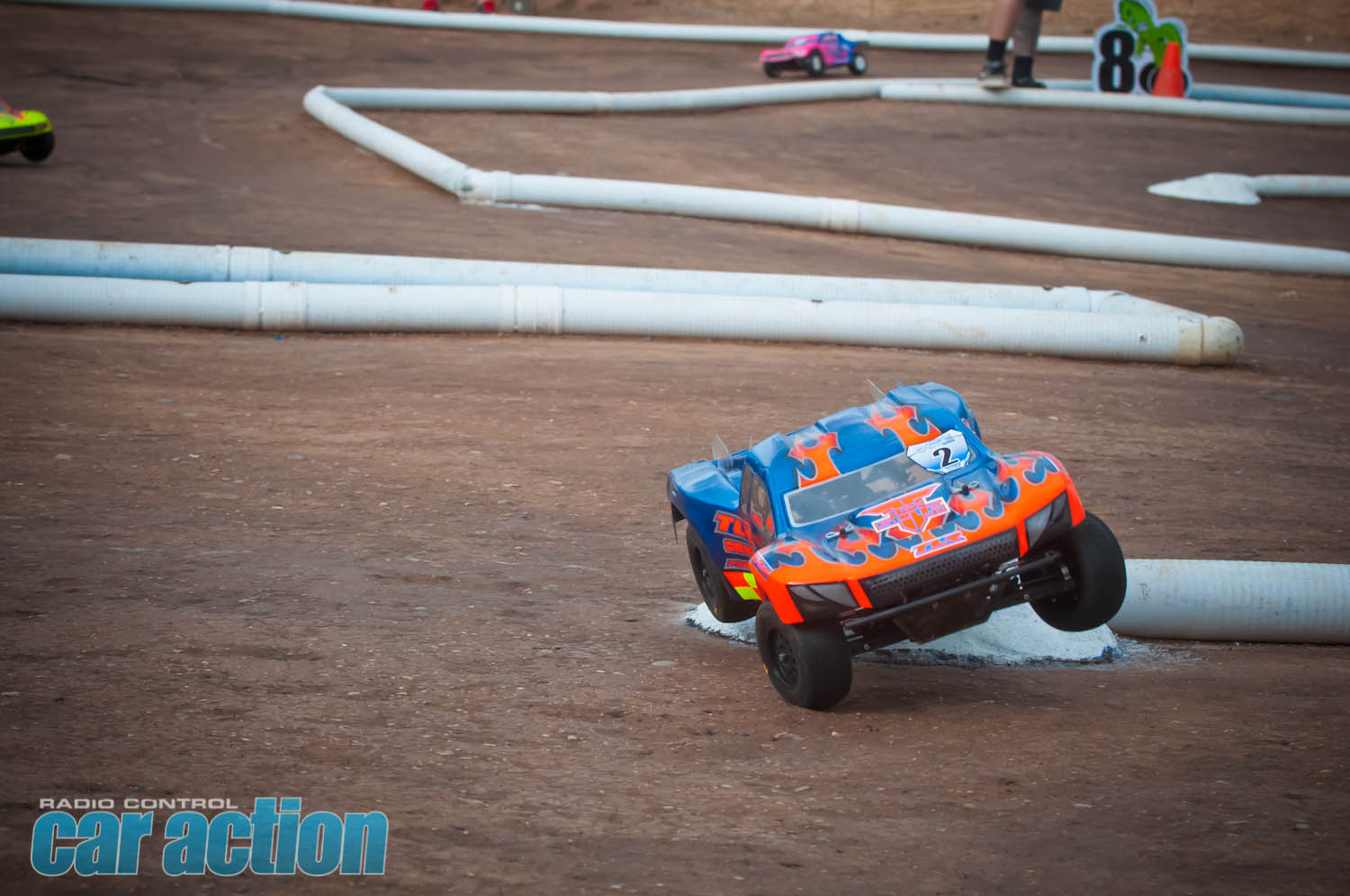 After a clutch drive in the third round sealed the deal, Dakotah Phend will start his title defense from the front of the grid.

After setting TQ in the third round of qualifying, Dakotah Phend ensured himself at least a tie for the overall – and when he ran into severe traffic problems that demoted him to his worst finish of the weekend, the stage was set for Jörn Neumann to battle against the clock for the overall TQ, as he needed to win the heat and eclipse Phend’s combined marks from the first and third rounds. Neumann completed half of the challenge, winning the heat but coming up a few seconds short. Three seconds behind him, Team Durango teammate Ryan Lutz was the only other driver to complete 14 laps with Travis Amezcua, David Jenson, and Phend rounding out the top five. 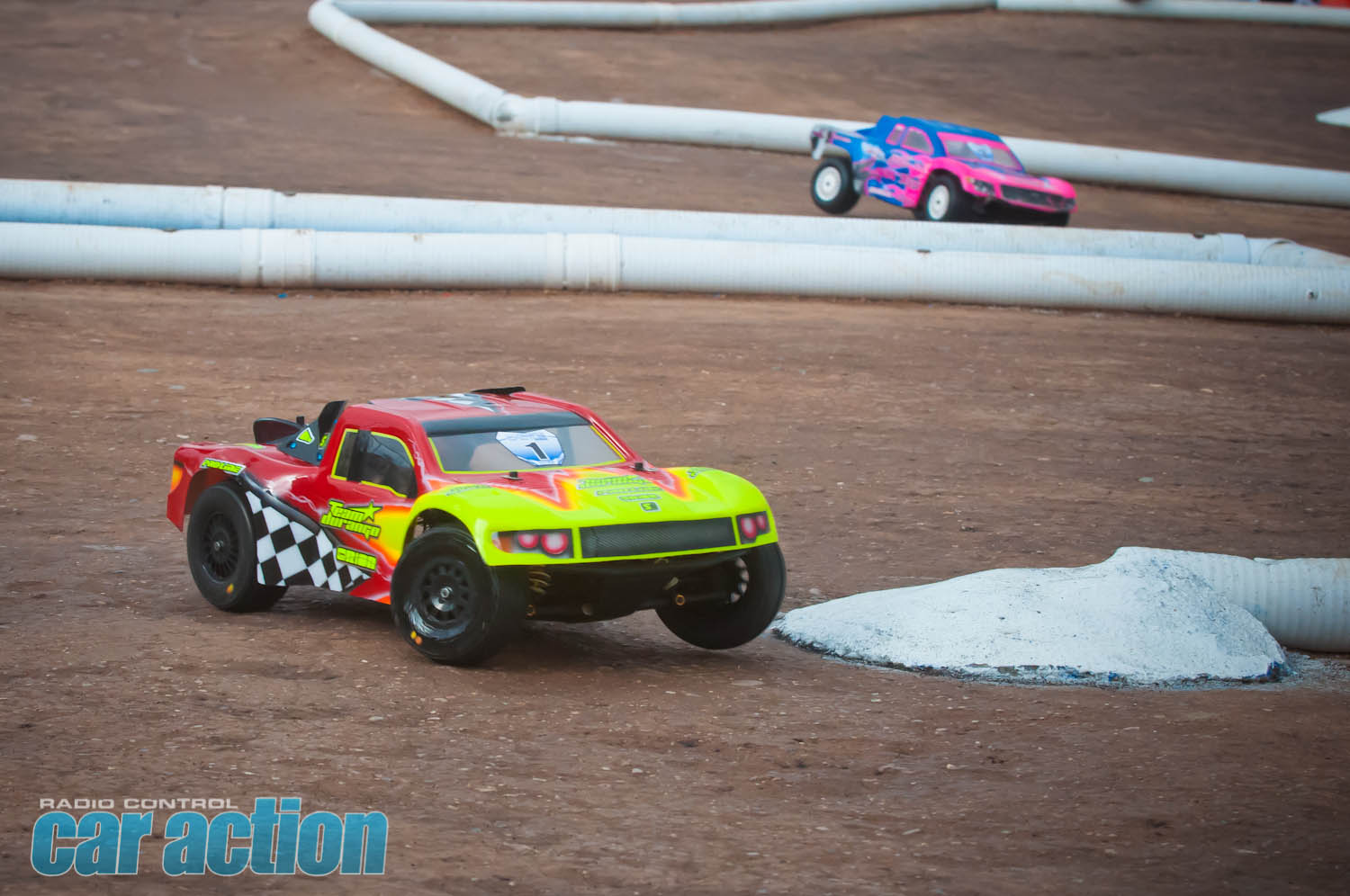 Jörn Neumann’s experience on Europe’s indoor carpet tracks could be his best advantage going into Sunday’s heads-up racing on the rough and abrasive SRS course. 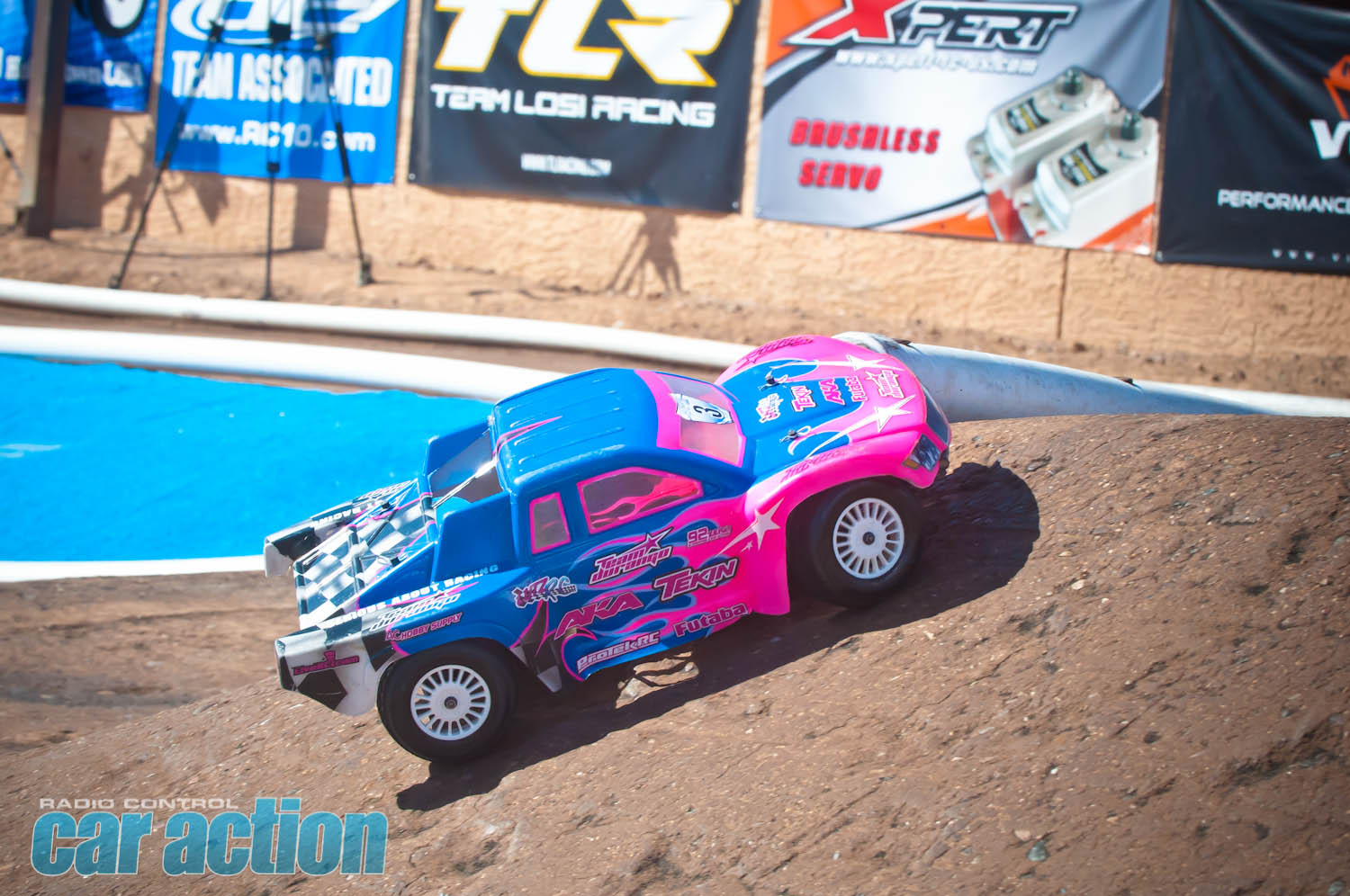 Two second-place finishes earned Ryan Lutz the third spot on the grid – and the opportunity to be the dark horse of the class in the main events.

Modified 2WD Buggy
Current ROAR National Champion Dakotah Phend logged his best run of the weekend, becoming the third driver to win a round at this year’s race with a start-to-finish victory by nearly one second over last night’s TQ, Ryan Maifield. Maifield actually trailed Tebo after three laps, getting by Tebo on the clock and closing within a few tenths of Phend before Ryan Cavalieri jumped into second for one lap when both Phend and Maifield both made their only slight bobble of the race on the eighth lap, just past the halfway mark in the race. After that, Phend and Maifield were close on the clock for the final two-plus minutes with the ‘Phenom’ holding on despite giving up over three-tenths on the last lap alone. Cavalieri fell off the pace of the leaders in the final minutes, coming up short of the 14-lap run by less than a half of a second. Behind the top three, the top ten was scattered with drivers who sat outside the ‘A’ heat after last night’s re-sort. 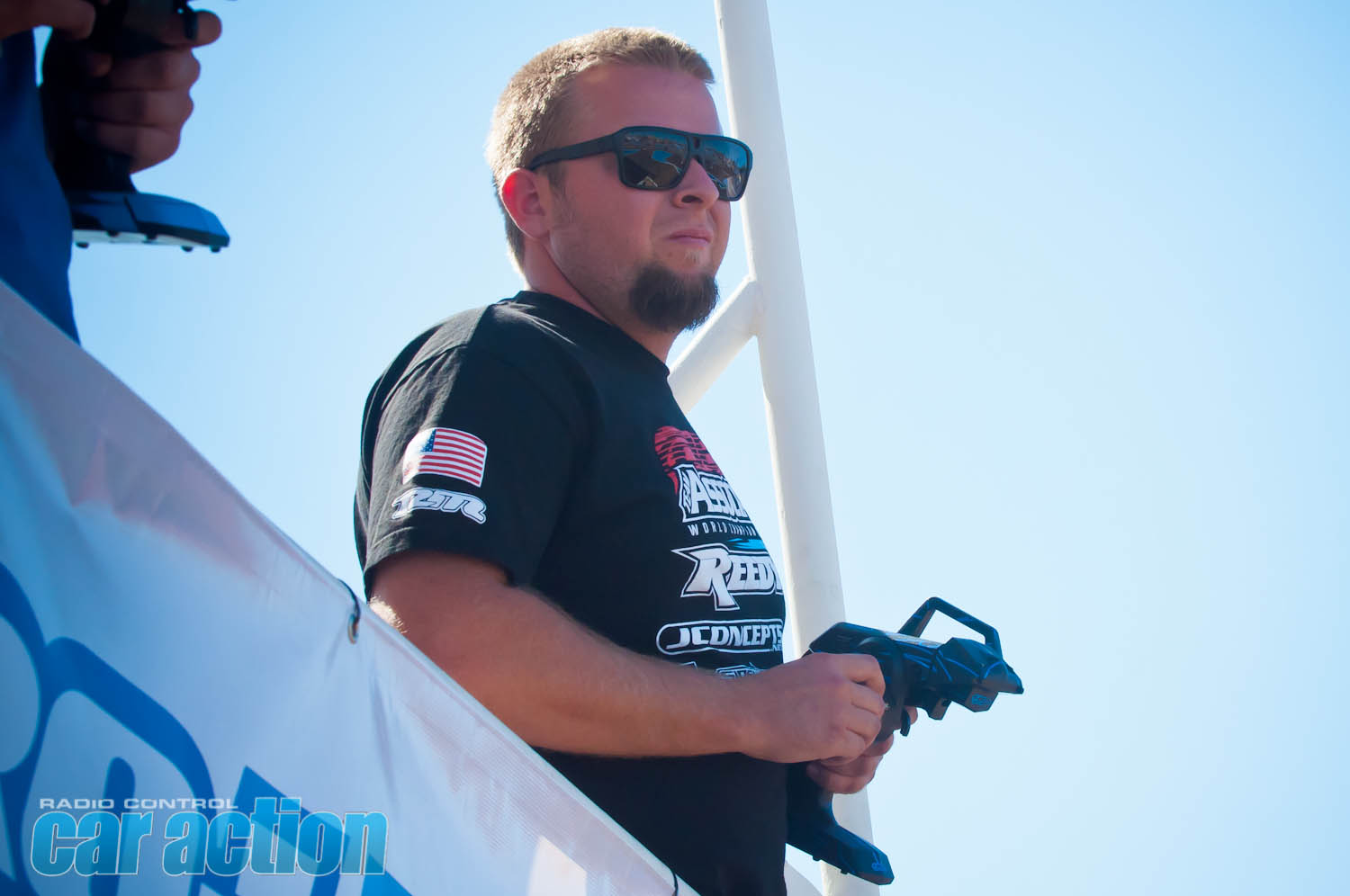 Hometown boy Ryan Maifield came within one second of wrapping up the Modified Buggy TQ.

The stage was set for the final qualifying heat of the weekend to determine the overall TQ for the 2WD Modified Buggy class, made even more interesting as Travis Amezcua and Ty Tessmann turned in stellar 13/5:00 runs in the lower qualifiers before the ‘A’ heat hit the track. With Jared Tebo, Ryan Maifield, and Dakotah Phend each scoring a round win over the weekend, another by any of those three would wrap up the top spot – and that’s exactly what Phend did, minimizing the damage of a couple of mistakes to top the closest round of the weekend. Phend, Amezcua, and Tessmann all finished within just over one-half of a second! 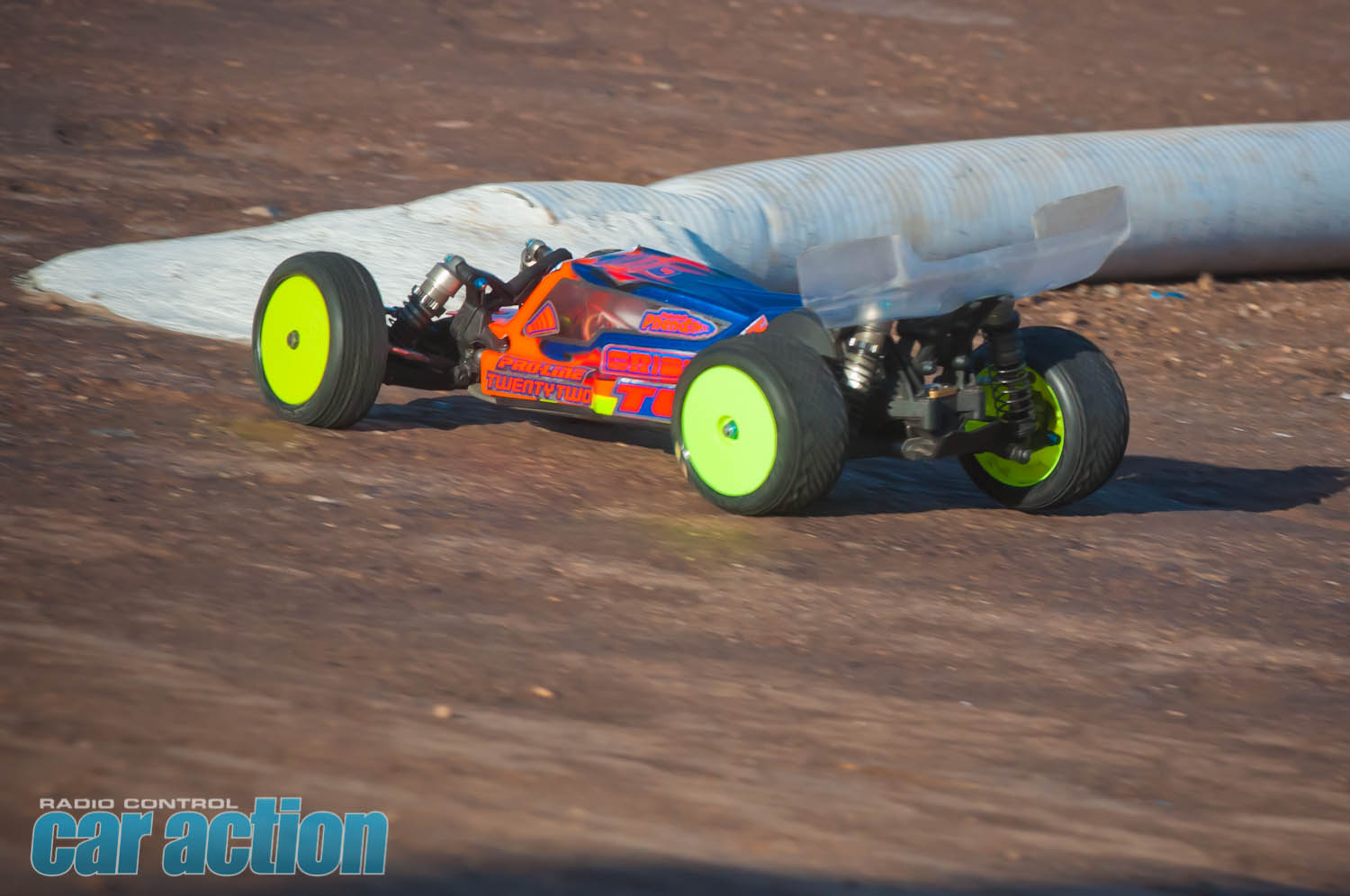 Dakotah Phend swept both rounds on Saturday by a combined 1.3 seconds and the current National Champion will start up front for the main events. 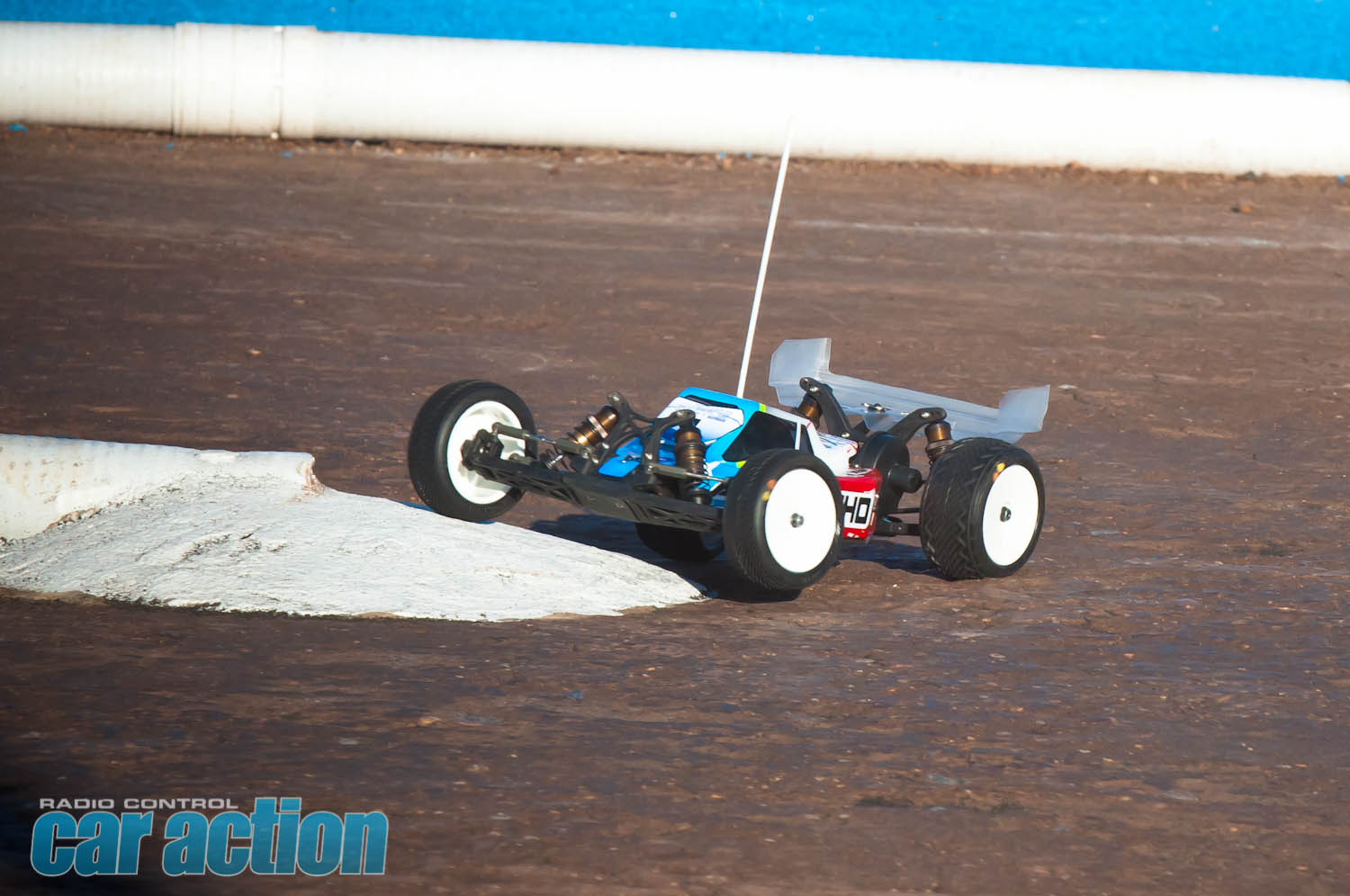 Reigning IFMAR World Champion Jared Tebo will start fourth on Sunday – and depending on how crazy the first lap gets, he may have the best spot of anyone.

About a half hour after the final qualifying round finished, the B-Main qualifying drivers for 4WD and 2WD Modified Buggy hit the track for the Last Chance Qualifier, with the winner of the LCQ slated to start 11th on the grid for the triple-A Mains. 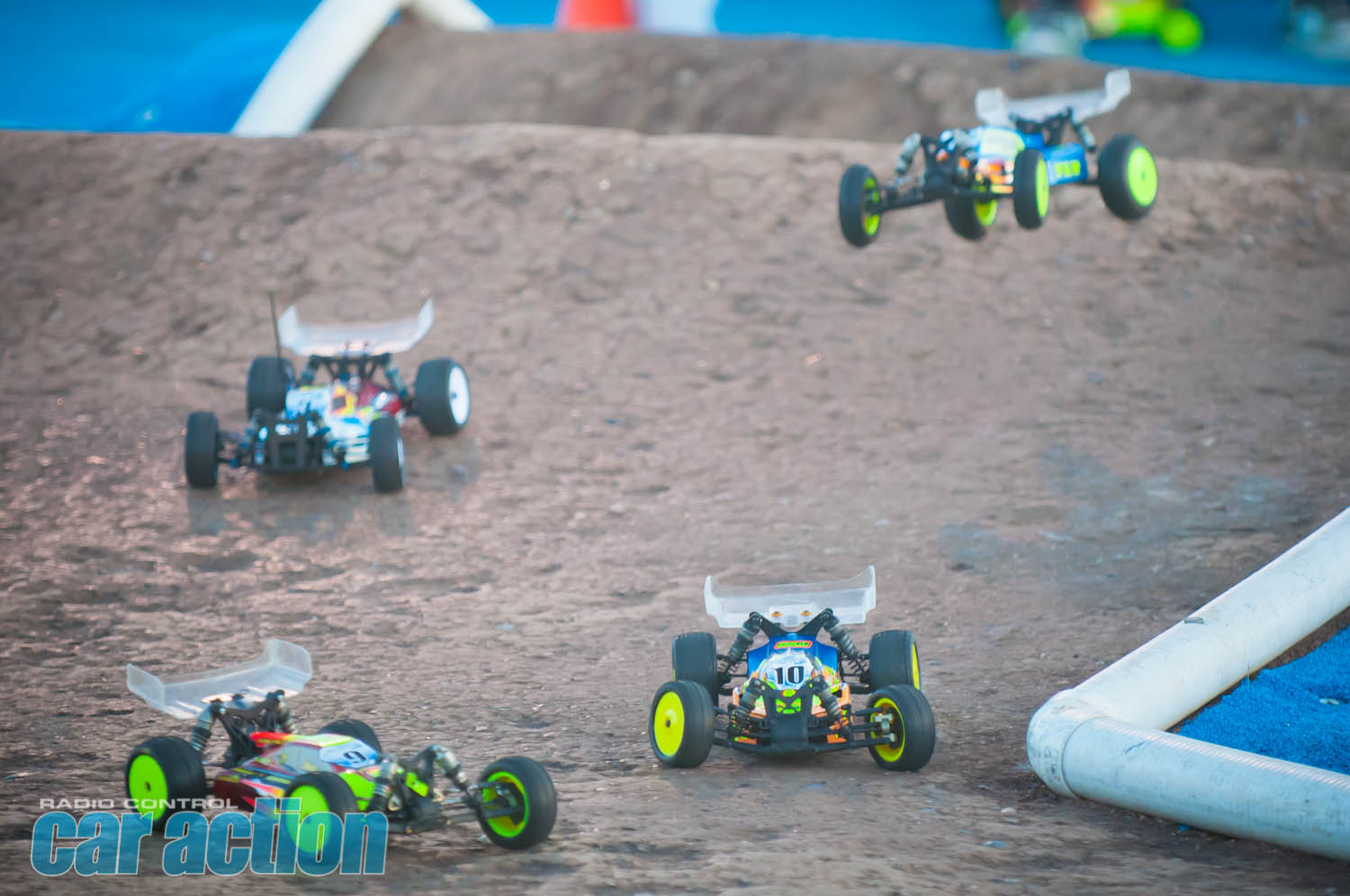 The 4WD B-main event lined up first, and Kody Numedahl quickly found his way around Travis Amezcua and stretched out a large lead. Meanwhile, Mike Truhe worked his way up from the final spot on the grid and reeled in Numedahl, setting up a last-lap battle that, unfortunately for the spectators surrounding the track, ended a few corners before the race was complete as Truhe caught a pipe and flipped over. Numedahl (Associated/Reedy/JConcepts) earned his way into the final set of main events. 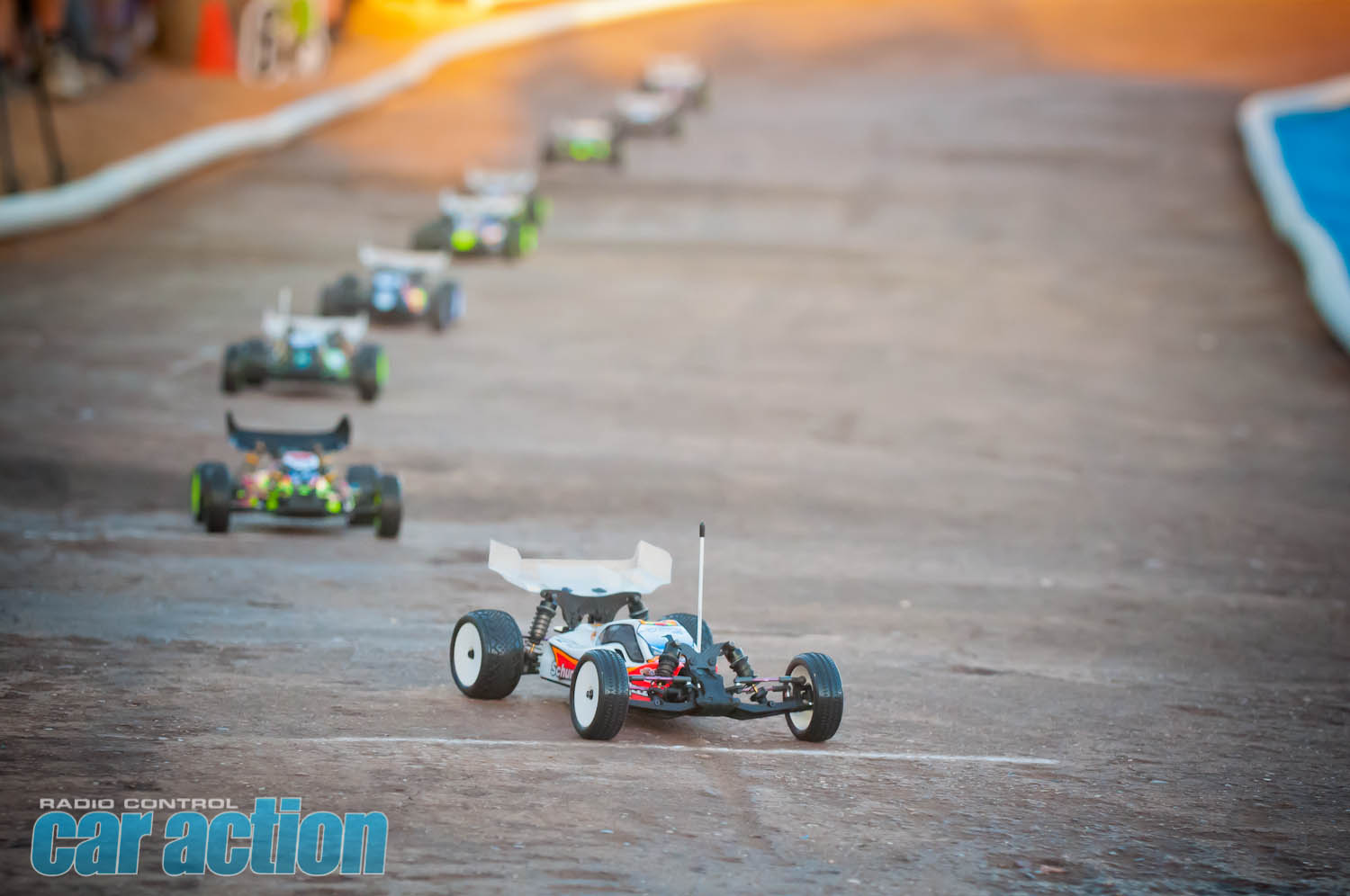 The 2WD B-main was very similar to the first, with the driver starting up front (in this case, Schumacher’s Carson Wernimont) only holding onto the lead for a few corners – and again, the second qualifier (in this case, Jörn Neumann) took advantage of the early mistake to shake off the pressure and lead from start to finish. The young German wasn’t really touched or even pressured after that, so Jörn Neumann (Durango/Orion/Thunder Power/Pro-Line) raced into tomorrow’s series of A-mains with a clear sense of his chances and the strategy to help him make the most of the opportunity.

After a long weekend in the Arizona sun, just one day remains – and it’s all about main events. Check back for the full results! 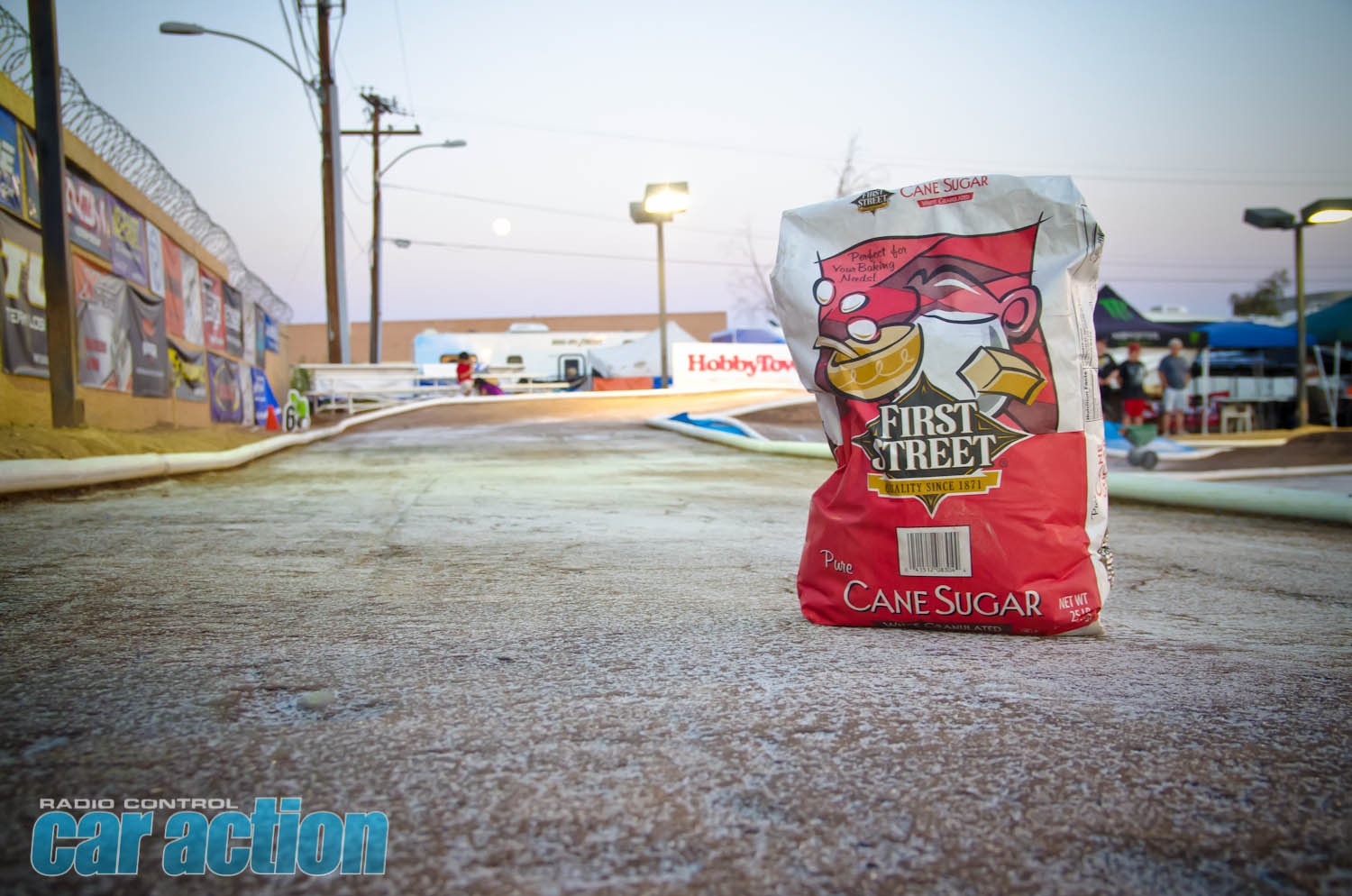 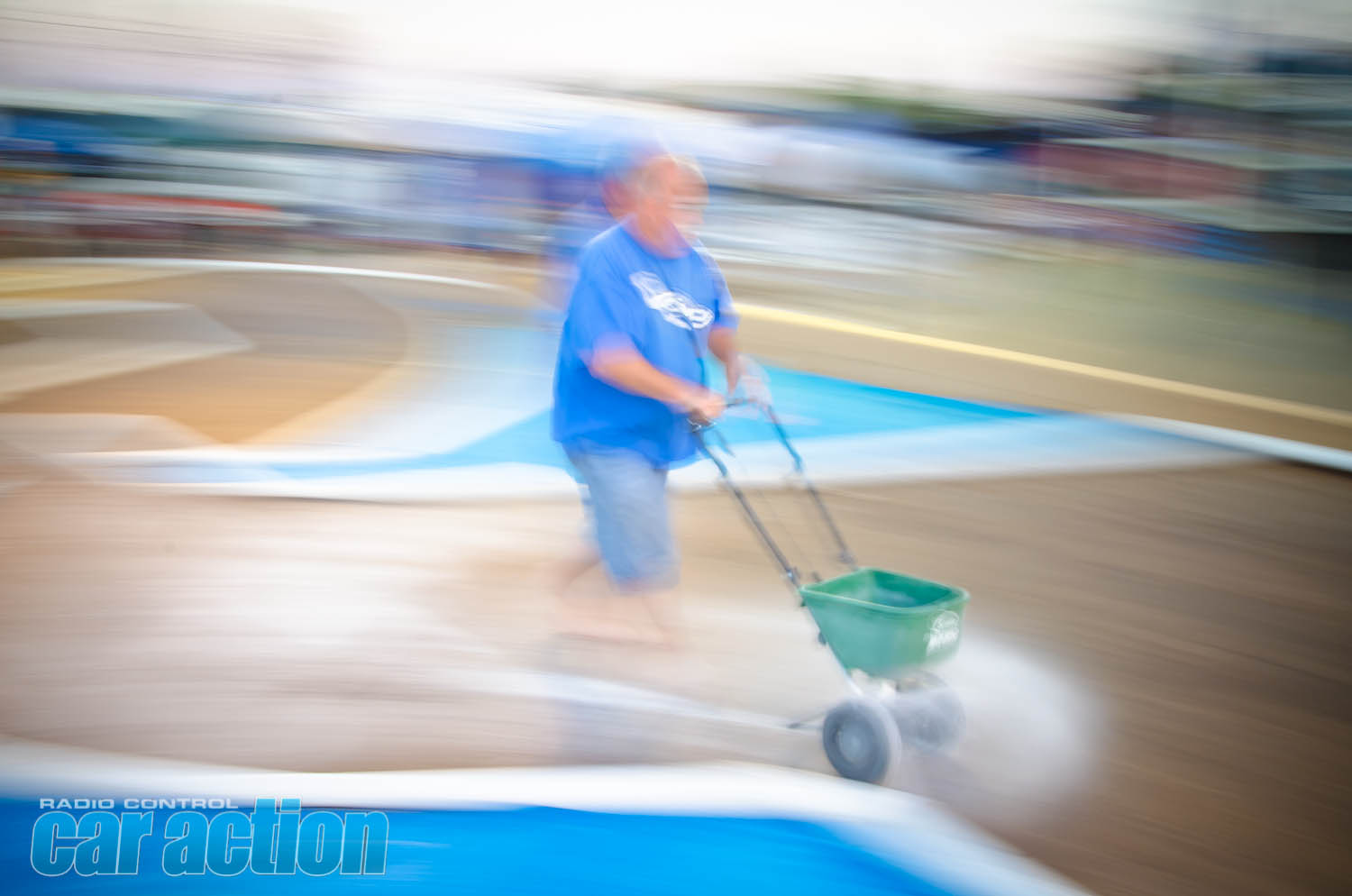