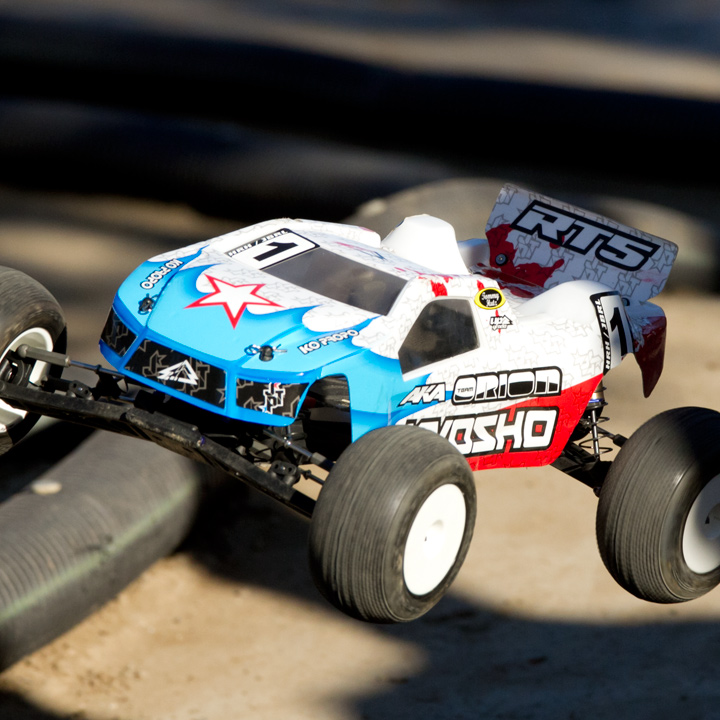 Hot Rod Hobbies in Saugus, California (about 35 miles north of Los Angeles) is host to The Reedy Truck Race. Due to scheduling conflicts this race was not ran last year, but Jimmy Babcock and the JBRL crew brought it back for 2011. The absence of nitro classes this year, have made this more of a big short course event with the addition of stadium truck. What was thought to be a small turn out ended up with around 160 entries and some of the top driver such as Ryan Maifield, Ryan Cavalieri, Jared Tebo, Dustin Evans, Dakotah Phend, Mike Truhe and more showed up to do some battle.

Ryan Maifield dominated the Pro-2 class today with his Team Associated SC-10. He TQ’ed round 1 and 2 of qualifying and clinched the overall TQ before the 3rd round even started. Ryan made a few setup changes for the 3rd round of qualifying and was not happy with them. He will be going back to his original setup and is going into Sunday with confidence for the triple A-mains. Jared Tebo will be starting just behind Maifield with his second place finish and TQ for round 3. TLR Youngster, Dakotah Phend had a great day in Pro-2 and finished up 3rd overall.

Pro-4 was the Ryan and Ryan show. Maifield took the TQ in round 1 and Cavalieri was the fastest for round 2. TLR driver Mike Truhe was leading round 3 and looked to be having a great run with the Ryans in tow. One small rollover for Truhe allowed the Associated teammates slip by to take over the top two positions. For the next couple laps the top 3 spots were separated by only .1 seconds! Ryan Cavalieri would prevail with the win and overall TQ by .4 seconds over teammate Ryan Maifield. The mains should have some great battles with those 3 starting on the front of the grid.

Jared Tebo drove his Kyosho RT-5 to the top in both Q1 and Q2, securing the pole position for the mains in mod truck. For Q3, Jared tried a slightly different tire choice and wasn’t very happy with change. I asked him about his setup and possibly changing something for the mains tomorrow as it will be slightly warmer and traction is increasing as well. He said, “I haven’t touched my setup on my truck since I got here. I threw it on the track and it’s dialed.” Ryan Maifield and Dakotah Phend will be rounding out the top 3 on the grid. Both of them had a great day of qualifying.

Sunday will be a triple A-main format. The track is getting faster every run as traction comes up. The layout is quite fast as it is, so spectators will be in for some high speed and intense racing for the mains.

Check out the gallery below for some of today’s action!