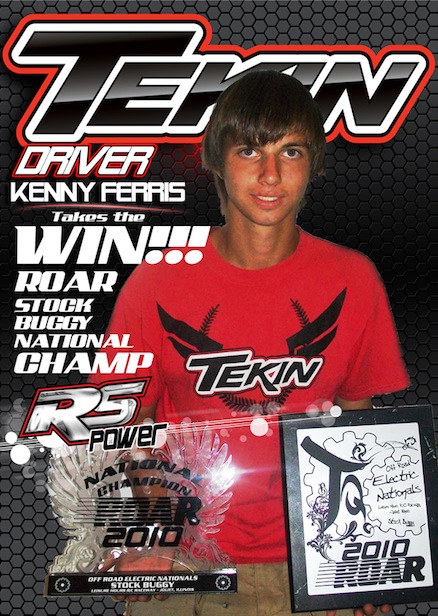 Team Associated/Kyosho/ODonnell ace Jared The Kid Tebo (who just turned 18 this past weekend) won both the 1/10-scale and 1/8-scale pro classes at The Dirt Nitro Challenge.
In the Unlimited Monster Truck class, Mugens Chad Bradley TQd and won with the new Mugen MBX5-T truggy, which will be offered as a conversion kit for the MBX-5 buggy.
Tebo was top qualifier in 1/10-scale and managed to break away from an early battle with Team Trinity/Losis Adam Drake. In 1/8-scale, Jared put in a valiant effort late in the race to pass Kyosho/Peak driver Mark Pavidis with just a couple minutes remaining in the race. Eight-scale TQ Ryan Cavalieri passed Pavidis with seconds remaining to grab second.
While Bradley TQd and won the monster truck class, Matt Gosch put in a strong showing taking second place earning him a100% Pro-Line rideand did we mention hes just 13 years old?. Mugens Jason Ashton (also running an MBX5-T) was on fire, and bumped all the way up from the G-main (the lowest Main for monster trucks) to take home third place. Ashton even led part of the A-main despite being 12th on the grid for the start of the race.