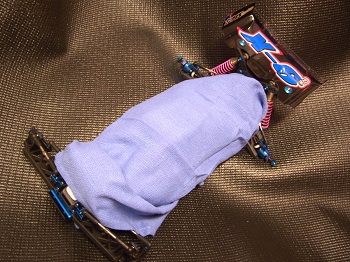 Looks like X Factory has a new mid motor 2WD buggy in the works called the X – 6 Cubed.  Here is what X Factory is reporting thus far:

Way back in 2006 X Factory introduced the New Math, the revolutionary mid-motor X – 6. It was the first mass-produced molded chassis mid-motor buggy and it promptly won National Championships all over the world, including U.K. and France. Three years later, in 2009, X Factory UpGraded the car by releasing the X – 6 Squared, and that car has won more than a dozen National Championships in countries from Finland to Australia.

Get ready for Higher Math! The new X – 6 Cubed will be on store shelves in 8 – 10 weeks! Final testing is underway now with the entire X Factory U.K. Team testing final astro & grass set-ups while U.S. drivers as well as the European Team will soon be driving pre-production Higher Math on many different dirt tracks.

Chief Engineer Paul Sinclair said, “We have been testing many different concepts to UpGrade the X – 6 Squared for over two months now. Team drivers have tested various chassis lengths and materials as well as electronics placement and weight distribution, and we are pretty much in agreement now. So it’s time for final testing and set-up work with pre-production cars. In about two weeks we’ll start writing the instructions, and then we’ll be ready to go.”

“Initial testing has proven the Cubed to be a significant improvement over the Squared. Principally it jumps and lands better,” Sinclair continued. Those with sharp eyes will see the new X – 6 Cubed on various tracks in U.K. this weekend and in the U.S. and Europe soon after.

If you like this article, check out this additional article on X Factory.