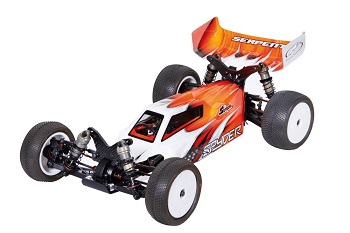 The first track pics of Serpent’s Billy-Easton-designed SRX4 appeared back in January, and now the four-wheeler is getting ready to hit shelves right about now. There are no official body-off shots yet, but you can count on dual-belt drive with a front clicker, graphite chassis and shock towers, and big-bore shocks. With plenty of prototype testing under their belts, Serpent team drivers should have the car well sorted for the upcoming Worlds–we’ll be watching! 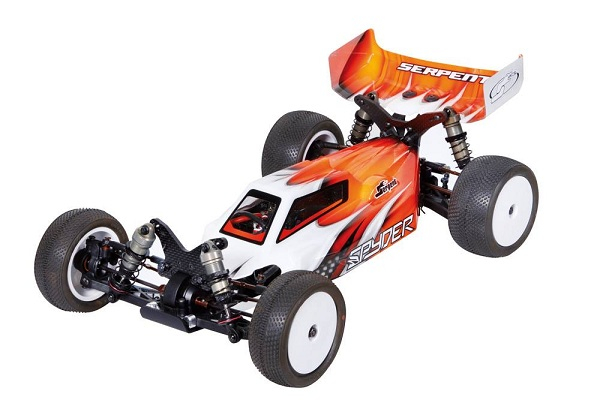 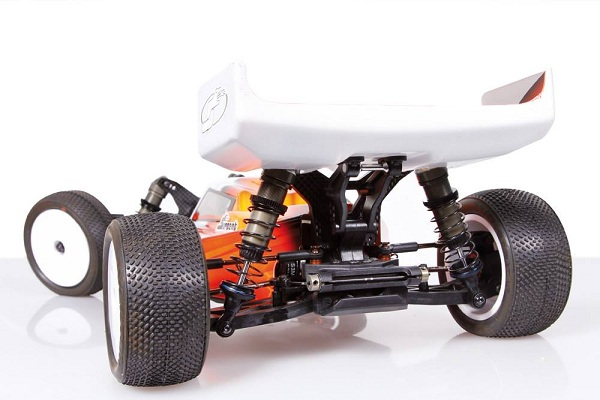 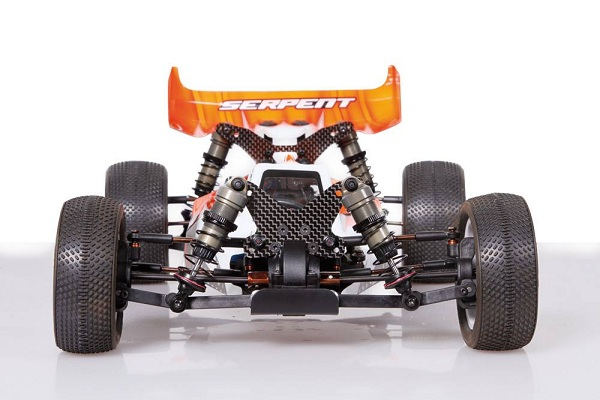 The 2-belt-driven 1/10 4wd buggy is a high end racing buggy with carbon chassis and carbon shocktowers, springsteel transmission, smooth geardiffs, solid slipper, clicker, hardcoated big bore shocks with pre-oiled x-rings, and a large variety of set-up options to fine-tune your SRX4 car. The SRX4 car is designed as saddle pack version, but with some small mods a shorty can be fitted too. The kit comes complete with wheels, a very sleek, low, narrow body and large rear wing.

Designer Billy Easton has shown great pace at tracks across Florida, USA and Joern Neumann and Hupo Honigl showed good results at the recent EC in the UK, where Neumann took the Vice Championship title in 4wd buggy.

Serpent now offers a superb 1/10 offroad program with the Spyder RM 2wd buggy, the MM 2wd buggy, the ShortCourse RM 2wd and now the SRX4 1/10 4wd buggy. In case you run multiple classes its good to know that the Spyder MM 2wd and SRX4 share quite a few parts.

Spyder SRX4: How it developed

A pre production version was already shown on the Nurnberg Toyfair earlier this year, and Team Serpent drivers as Joern Neumann, Billy Easton, Hupo Honigl, and distributor-driver Tony Evdoka have been running the prototype car in various races, both dirt and astro.

While we were happy with the performance on loose dirt and hardpacked high grip clay, where this belt-driven SRX4 buggy is working superwell, we were not happy enough with the cars high grip carpet / astro performance initially.

Team Serpent also joined the Worlds test-week after the warm-up to learn more about racing the 2wd and 4wd buggies on this super high grip carpet. For testing we tested 2wd and 4wd cars with some different layouts. These prototypes, partially retro-fitted with parts from other brand cars as well to allow for such short term and quick track-testing. Maybe none of the cars tested was the optimal one, but we have gathered lots of data and believe we know now whats needed ….. !

The WC track-surface is a very special one, with extreme grip levels, which you will hardly find anywhere else on this planet. However we will take part in the WC and want to do well. We are currently working on some special design cars which we feel may work even better on this specific track, but which may also work well after the WC on other type tracks. There is only one way to find out ! Design, make, test and race !

In the end Serpents goal is to supply our customers with the best Serpent cars possible, for the specific surface you may be racing on. If that needs more different version cars, or specific optionals then we will make them for you ! Development never stops ….