Serpent is about to release the ALL-NEW COBRA SRX8 1/8 4wd gas powered buggy.

Team Serpent will showcase the car at the upcoming Silver State race in the USA and directly after at the NEO 2016 as well.

In 2009 entered the 1/8 buggy market with the Cobra 811 buggy, designed by World Champion Billy Easton from the USA.

The experience gained over the past years is used by Billy Easton to create a super nice new buggy, which takes care of all suggestions comments from our team and drivers and includes the latest developments in 1/8 off-road racing and more. The level of equipment in the new Cobra SRX8 buggy is simply stunning!

Delivery to the market planned for late March / early April 2016. Pre-orders are accepted.

In the video above you can see team driver Paul C is testing the Cobra SRX8 at a track in USA, ahead of the 2016 Silver State race. 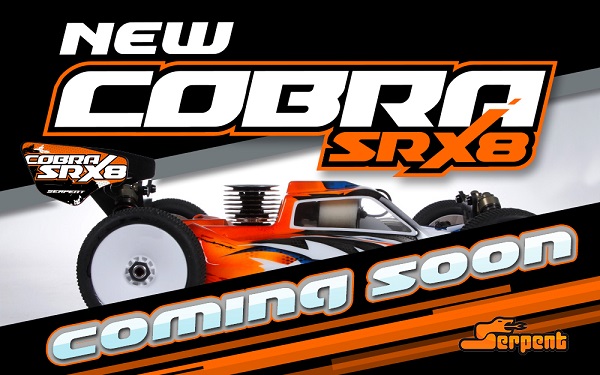