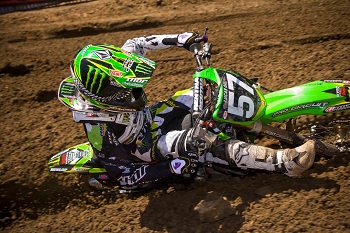 Pro Circuit/Kawasaki/Traxxas rider Blake Baggett (57) maintained his team’s win streak in both the series and at Thunder Valley MX with his third overall win of the season at the mile-high track in Lakewood, Colorado. With the help of Baggett, the team remains undefeated since the series made its first appearance at the Colorado track in 2005. Dean Wilson (15) put in a 2-2 moto performance that pushed him to the front of the point standings ahead of teammate Tyla Rattray (28). While Rattray put in a solid 5-5 results for fifth overall, he trails Wilson by eight points. Broc Tickle (20) started off the day with a seventh-place finish in Moto 1, but a punctured radiator forced him to retire early in Moto 2 and finish 15th overall.

With 10 motos in the books, Baggett now claims five moto wins and a series-high three overall wins already thisseason. Unlike his last win at High Point, Baggett got out front early and maintained a comfortable gap in both motos to finish with a 1-1 and inch closer to the top of the points.

“Today was one of the best races I’ve had this season,” said Baggett. “I was able to get out to the lead early and ride the pace I wanted rather than try to move through the pack. I had one moment at the end of the second moto, but it was small enough to recover quickly.”

While Wilson would like to have won an overall already this season, his consistent podium finishes have earned him valuable points after five rounds. His 2-2 ride in Colorado put him on the podium once again and back on top of the leaderboard.

“It has been a little frustrating not being able to break through to the top of the box, but the two second-place finishes put me eight points in the lead and in the end that will be the most important,” said Wilson. “I’ll keep doing what I’m doing, and I know I’ll be able to be get my first win of the season.”

Rattray put in a good 5-5 ride on the difficult Colorado track. In the first moto, he made his way through several riders to finish in the top-five and in the second moto maintained another fifth-place as the track continued to get rough and deep.

“The track was pretty difficult today and I wasn’t able to break through past fifth,” said Rattray. “It wasn’t my day, but I’m looking forward to getting back out there next week at Red Bud.”

Tickle’s day started with a good performance in the first moto where he finished the 30 minutes plus two laps in seventh. The second moto had the riders facing a tougher track and Tickle ran into some bad luck when his radiator was punctured. He was forced to end his moto early and finish the day in 15th overall.

“There are some circumstances I can’t control and the radiator was one of them,” said Tickle. “I just have to put it all behind me and build upon the good finishes that I have had the past few weeks. I love Red Bud and I’m really excited to get back to that track.”

The Pro Circuit/Kawasaki/Traxxas team will be heading to Red Bud in Buchanan, Mich. for the halfway stop. After five rounds, Dean Wilson holds points lead with 214 points, while Rattray stays close with 206 in the runner-up spot. Baggett keeps moving closer in third with 194 points, and Tickle’s maintains seventh with 113 points.