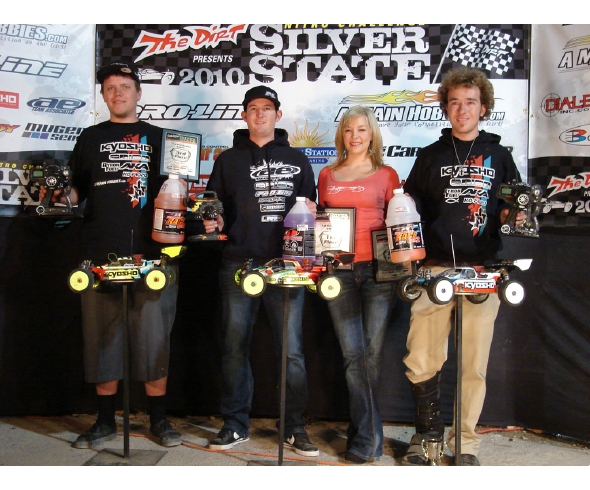 Latest race news from Orion:This years Silver State Nitro Challenge was held at the Silver Bowl Park in Las Vegas, NV. Temperatures were consistantly in the upper 60’s as well as gusty winds all week long. The entries reached well over 300 for the event!

The race format consisted of 3 7-minute qualifiers with the 2 best counting for points. 12 drivers would go straight into the A-Main event with a 3 car bump. Then a 45-minute A-Main would be ran to decide the Champion for the 1/8 Pro Nitro Classes.

In the 1/8 Pro Buggy Class it was Jared Tebo who TQ’ed overall. Team Orion teammates Mike Truhe would start 2nd, Ryan Cavalieri 3rd, and Cody King 7th. At the start of the 45-minute A-Main Tebo, Truhe, and Cavalieri had a clean start and began to break away from the field. At the halfway point Tebo and Cavalieri had seperated themselves by 1 lap on the field. JT and RC swapped back and forth for the lead several times while racing extremely clean with each other. With 5 laps to go it was Cavalieri leading by less than 5 seconds over Tebo. Tebo closed up the gap with 1 minute remaining but Cavalieri drove perfect not making any mistakes to take home the 1/8 Pro Buggy Championship. Tebo finished a very respectable 2nd overall and Cody King made a hard charge at the end to finish 3rd. This gave Team Orion a clean sweep on the podium!

Team Orion USA Team Manager Joe Pillars was on hand to help the Team and would also compete in the Pro 2 SC Class. Pillars TQ’ed the last round of qualifying, laying down the fastest run of the weekend. Qualifying was very close and JP would start 3rd on the grid, missing the overall TQ by 1 point.

The Pro 2 SC A-Main would be set for 10-minutes. At the start of the main event Pillars quickly made his way up to the 2nd position. At the halfway point of the race, Pillars started to close the gap with the leader. With 3-minutes remaining in the race, Pillars made a pass for the lead and would never look back. Pillars went ahead to take the win by over 16 seconds to take the Silver State Pro 2 SC Championship with his Kyosho Ultima SC.