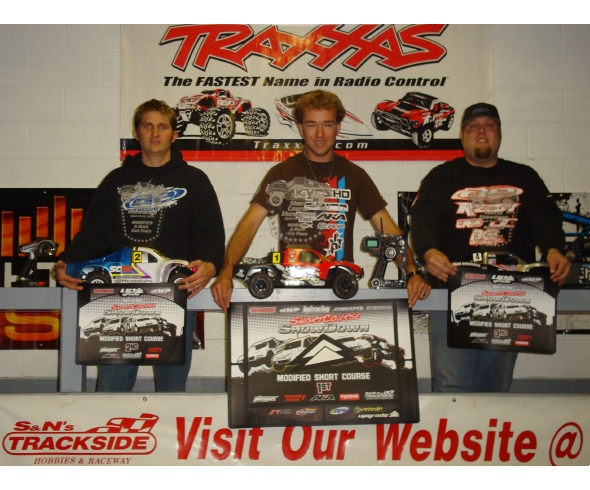 The 1st Annual Short Course Showdown was held at Trackside Hobbies in Milwaukee, WI April 23-25. This event was directed and announced by World Famous Scotty Ernst. Representatives from all the major short course manufactureres were in attendance: Kyosho, Team Associated, Losi, HPI, and Traxxas. The total entries for the event reached an amazing 248! Making this the largest short course race in the World!

The race format consisted of open practice for all the classes on Friday. Saturday would have 3 5-minute qualifiers per class taking each drivers fastest time, also known as Rocket Round. The top 6 drivers would go straight into the A-Main event, then there would be a 2 car bump making it an 8 car field. On Sunday were the lower main bump ups were ran first, followed by the A-Main events at the end of the day.

Team Orion Factory Driver Jared Tebo was the man on a mission by TQ’ing all 3 rounds of qualifying for the Modified Short Course Class with his Team Orion powered Kyosho Ultima SC! Jared’s SC was hooked up with AKA Super Soft Wishbone Tires that helped him become the only driver to get by for that elusive 23rd lap and he managed to do this every qualifier! Team Orion USA Team Manager Joe Pillars was on hand for this event and qualified 5th overall in the A-Main.

The Modified Short Course A-Main event was scheduled for 10-minutes. At the sound of the tone, it was Tebo who got the holeshot and quickly began to check out on the field. Tebo went on to put the entire field a lap down while also setting the single fastest lap time being the only driver into the 12’s with a 12.805! At the end of the 10-minute A-Main it was Tebo who lead from wire to wire to take home the Championship for Team Orion!