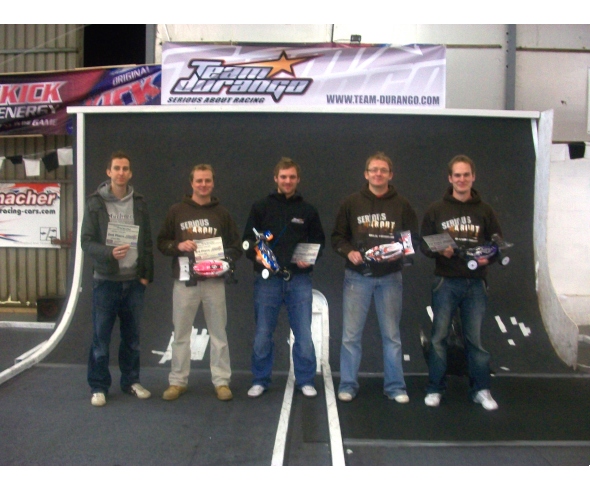 Last weekend saw the first round of the Team Durango Winter Series at Ardent Raceway.

Ardent Raceway is the result of a lot of hard work and dedication by John Dawson and the staff and volunteers who have spent a lot of time making this facility into one of the best indoor racing facilities in the UK. The venue usually holds on-road meetings on a perfectly flat carpet track. John wanted to return to his racing roots and hold an off-road series at Ardent Raceway, this was the first round of this series and the first off-road meeting to be held at this venue.

On the Friday before the event the transformation of the track from a flat carpet track to a multi-surface off-road track was started. This was completed on Saturday morning, ready for the arrival of keen off-roaders wanting to practise.

The track consisted of different surfaces including several different types of carpet, hardboard and laminate flooring. There was a table top feature with a hairpin, a wall ride, rumble mats and a tricky double jump.

116 competitors were booked in, this was split into 6 heat of 2wd, 6 heats of 4wd and one heat of Short Course Trucks.

Several of the countries top off-road racers were booked in and would be fighting it out for overall victory. Also competing in a rare off-road outing was former World and European on-road champion Andy Moore.

With the FTD qualifying format that was used it was even more important than usual to get clean, fast runs.

After 3 rounds of qualifying TQ in 4wd was taken by Team Durango driver Nathan Waters. Second place on the grid was taken by Andy Moore, with Simon Moss rounding up the top three with a fast run in the third round of qualifying. The overall top ten looked like this:-

With the top two positions in qualifying and 5 places in the top 8 the Team Durango DEX410 definitely showed its speed in qualifying.

Spotted in the pits were a few new products.

The first item noticed were the dBoots Terrabyte tyre. This tyre is joint control tyre for the Team Durango winter series and should be available for the next round.

The next item seen was a Team Durango rubber pit mat. The Team Durango pit mat incorporates a magnetic strip at the bottom of the mat which helps any loose metal parts stay in place. A lot of drivers liked this feature and were asking when the mats were available to buy. The answer – within the next month

The finals would be decided over two legs. The driver with the lowest score when the positions in each leg were added together would be the overall winner.

In the second leg of the 4WD A final Andy Moore once again got an awesome start to take the lead from Nathan. Andy was setting the pace at the front until lap 5, where a mistake cost him the lead. A slow lap from Andy on lap 6 gave Nathan some breathing space, allowing Nathan to win the second final and with it take overall victory for the meeting. Second place in both finals gave Andy second overall for the meeting, and Paul ‘Robbo’ Robinson had two solid finishes to give him third position overall.

The other Team Durango DEX410 drivers in the A final had good final results, the 5 DEX410’s in the final finishing in the top 5 positions in the final!

Here are the overall results from the 4WD A-final:-

Congratulations to Nathan and all the Team Durango DEX410 drivers in the A final.

The next round of the series is on the 28th November and we have been promised some ‘Big Air’ by the Ardent crew. See you there!