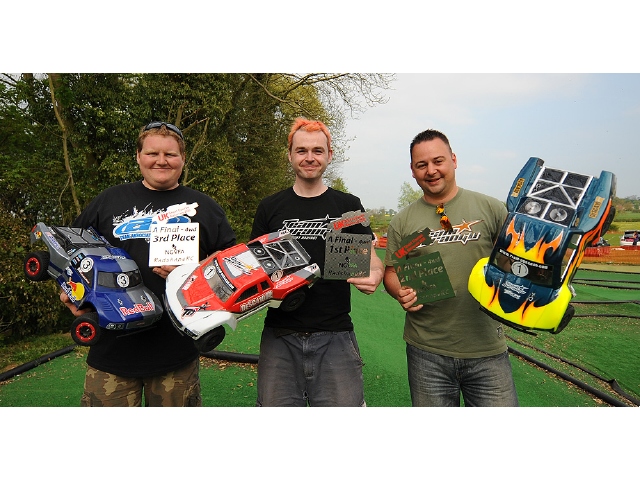 Sunday the 24th April 2011 saw the first of the 6-round Short Course national series kick off at the all-weather Astroturf track at Silverstone RCMCC. In the 4WD class, Team Durango driver Stuart Harlow dominated qualifying – taking all four rounds for the TQ spot and first on the grid. Jimmy Storey placed 2nd on the grid with the DESC410R, with Terry Atkinson 4th on the grid with yet another DESC410R.

In the 4WD class, Team Durango driver Stuart Harlow dominated qualifying taking all four rounds for the TQ spot with his Tekin Sc4x powered DESC410R. Jimmy Storey placed 2nd on the grid with his DESC410R powered by a Tekin Redline 6.5.

Grip levels were very high and drivers were trimming tyres to reduce the tendancy for grip roll. The low CoG of the Team Durango trucks also helped keep the wheels on the ground. Jimmy: “I was running the centre diff for the first time outdoors – I think it helped on the bumpy track to smooth out the power as well as the braking”

The finals were run over two legs instead of the 3 the drivers had been promised and it was best time to count. In leg one Jimmy Storey took up the lead after a few laps and took the leg win, but it was still very much to play for in the second leg. After taking the lead early again, Jimmy made an error passing a backmarker and Stuart re-took the lead for a couple of laps before positions changed again. Jimmy Storey took the second leg and with it the win – Stuart Harlow came in second overall for a Team Durango and Team Tekin 1-2 finish.