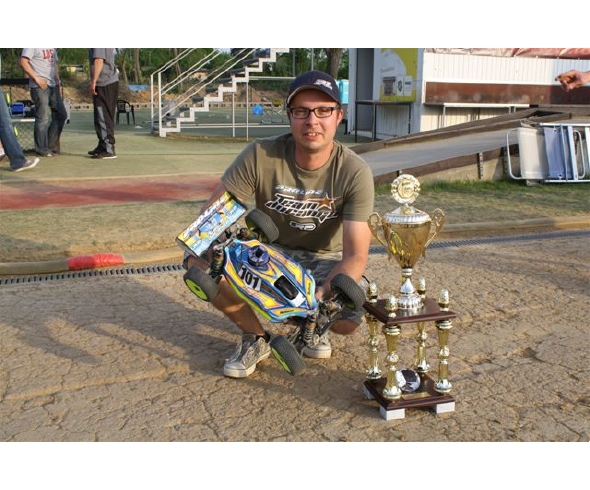 Team Durango’s commitment to creating the best engineered and performing racing cars continued this weekend when the DNX408 was, once again, put through its paces by Team Durango drivers Hupo Honigl and Martin Achter.

The testing period for any new car is intense, but for the DNX408 it has been especially so. Because there are so many 1/8 nitro buggies available for the RC racer to choose from, Team Durango want to ensure that when we release our 1/8 nitro buggy into an already crowded class, we do so with a leading-edge car that is as strong and reliable as it is innovative.

Team Durango’s philosophy of only releasing a car when we are 100% happy with it means that we have to test, re-test and test again. If more testing is required, we do it. We are serious about racing and we are very serious about pre-production testing.

Hupo sent us this report from the race:

Gerd made some subtle changes to a couple of parts and all I can say is that they work awesome!

In qualifying I experimented with the front suspension link positions – in the end the car was really good, and I was right on pace. I finished 4th – 4th – 3rd – 2nd – 1st, and ended up 3rd overall.

In the semi I had a pretty hard battle with Neumann – about 3 mins before the end I was in the lead, but then a lapped driver took me out which cost me about 6 seconds. I missed TQ by 4 seconds.

For the final I went from M2 compound (medium) to XTR (hard) I was 100% sure that would be better because the weather was quite warm and the track was very hard-packed. At the beginning of the final I took it easy, waiting for the tyres to start working – but unfortunatly they never really got better – so I started to push a little harder. By this time I was in 2nd, but the gap was already pretty big to Jörn.

I pushed the car harder and it handled very well and I got a little closer to Jörn. At about 5 minutes before the end, I was only 2 corners away from him, but then another backmarker hit me, and Jörn was gone.

Well done to Jörn who won the race. I finished 2nd with Reckward 3rd.

Martin Achter did a great job for Team Durango, and he also made it to the main final – but he had an issue with his cluch early in the run.

With a little more experience and fine-tuning the car got even better, and I felt very comfortable with it! I really like this car and I am sure other RC racers will love it too.”