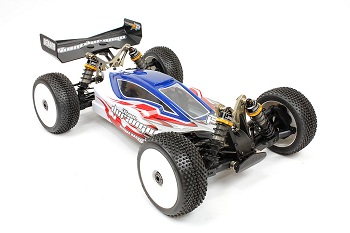 We gave you a 1st look at this new 1/8 electric buggy back in October and today Team Durango has officially announced its release. Check out the press release below for all the details:

The cost of Nitro fuel, coupled with the difficulty of correctly tuning engines, makes electric racing very appealing. As battery technology continues to improve, 1/8 electric off-road racing will carry on growing. With today’s batteries, motors and ESCs, run-times of over 20 minutes on a single charge can be achieved. And don’t forget, electric racing is seriously FAST!

Of course the internal components of an electric buggy are quite different to those of a nitro buggy, so it follows that the weight distribution of the components needs to be considered, calculated, tested and proven. That is what we did with the DEX408. In order to achieve optimum weight distribution (with a near perfect 50/50 front-to-rear), we decided to keep the chassis narrow, whilst allowing enough room for many of today’s most popular electrics and electronics. With a narrow chassis design, the DEX408 is nimble like its smaller DEX410 cousin, and it is easy to wrench-on in-between races.

All Team Durango cars have a certain look. Their low, flowing lines have become a hallmark of Team Durango’s racing heritage. The DEX408, with its streamlined, sculpted bodyshell and lightweight moulded rear wing, make it not only stunning to drive, but striking to look at. RC off-road doesn’t have to be ugly; fast can be beautiful, and the DEX408 is both.

Working on your car in-between winning races can sometimes be a chore. With the DEX408 though, Team Durango has considered this important part of racing. The ESC has been centrally positioned on its own composite platform, opposite which is a smaller platform for your Personal Transponder. Specially designed hook-and-loop straps secure the batteries to the chassis via the all-new composite side rails. Easy-access front and rear differentials are retained from the DEX408s nitro brother (DNX408), as are the race-proven wishbones and shock absorbers. The composite spur gear cover has a dedicated clip to hold motor and ESC wires tidily. Small details make the difference between an average RC buggy and a Team Durango RC buggy.

Some RC racers believe that 1/8 electric off-road is the future for off-road racing. No more will you have to be satisfied with a lumbering made-to-fit conversion for your old nitro buggy. If you want to be part of the future, the mind-blowingly fast and exciting future that is 1/8 electric off-road, choose the DEX408 from Team Durango.

If you like this article, check out this additional article on Team Durango.