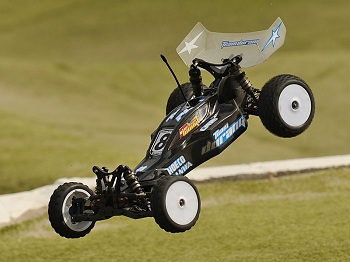 The new DEX210 2WD buggy from Team Durango made its world debut at the oOple ‘invernational’ race meeting this past weekend, 29-31st July. Whilst the car has been shown in rear motor format already, this meeting would be all about the mid-motor layout on the high grip astroturf surface. Hupo Hönigl made the trip over from Austria to give his car its first run alongside his Team Durango team-mates, Adam Skelding, Craig Collinson and previous oOple Invernational winner – Nathan Waters. Former European champion Chris Doughty from Team Durango was also on hand during practice day with his own DEX210 before heading off to the 8th scale Euros to compete.

Having never driven the new DEX210 buggy which shares no parts with the hand built prototype cars seen at previous races – Hupo was quickly at home with the buggy as he racked up a perfect score taking all four qualifiers on Saturday. A perfect performance in the 3-leg A finals saw Hupo take the win in all three legs just ahead of his fellow DEX210 runner Craig Collinson – who pushed Hupo hard for all 3 legs. dBoots were the order of the day in 2WD and most competitors used these on the rear for extra traction.

All four DEX210’s made the A-final and with a fantastic 1-2 finish first time out it was a great debut for the new car. Reaction to the car from drivers in the pits was overwealmingly positive – with many people pleased with the layout which retains a stick-pack cell layout even in mid-motor and doesn’t require special servos or other electrics to fit into the layout.