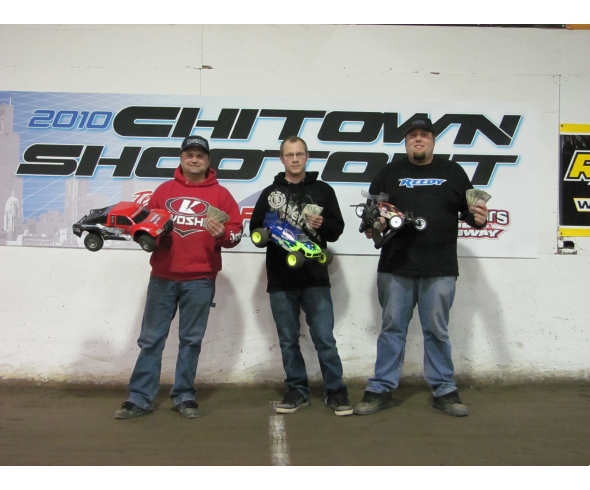 When racers talk about the best facilities in the world, Leisure Hours Raceway always ranks at the top of the list. It saw a record-setting turnout at this past weekend’s Chi-Town Shootout with over 300 entries! The best drivers in the Midwest were in attendance and put on an awesome display of driving talent. Make sure and check out the cool video from the event.

Team Checkpoint / Futaba driver Johnny LoGiudice came out of the gate flying and took the TQ spot with his Checkpoint batteries. But he had some trouble in the main event, and in the end it was Hobbico-sponsored Corey Crosley taking home the win.

Once again, Johnny LoGiudice set the pace to earn TQ honors. But this time he parlayed his front row starting spot and Checkpoint batteries to an early lead in the A main. From there LoGiudice never looked back, taking the win.

Hobbico-sponsored Corey Crosley made it look easy on his way to the TQ position but had troubles in the main event. Futaba’s Matt Gosch made a strong charge from mid-pack to finish in second place.

What can I say about Hobbico-sponsored Corey Crosley except that he was amazing! He put on a true driving clinic in one of the largest classes of the race. Crosley not only TQed each and every round, but he also went unchallenged in the A main, taking an impressive win.

Team Checkpoint’s Mike Zakowski came out of the box on fire and went straight to the TQ position. In the A main, he checked out from the field and nailed an easy win. “Zippy” also used his Futaba radio to guide him to the front with pure confidence.

Short course classes seem to be growing at an alarming rate and so does the competition. In the stock class it comes down to perfect laps and great batteries…and that’s what Team Checkpoint / Futaba driver Chris Arnold had. Chris took the early lead and protected it the entire race.

Once again, Chris Arnold used his Team Checkpoint batteries and Futaba 4PK to take the TQ spot. In the main, it was a great battle between the top three drivers. In the end, Arnold made it a clean sweep in the 2WD short course classes.

Nitro ace and Futaba team driver Matt Gosch put on an awesome driving display, taking the TQ and putting a lap on the field in the A main. Coming in a strong second place was Team Checkpoint / Futaba driver Brad Brucker.

This was the first year for this class at the Chi-Town and the competition was excellent. Dayton Miller used his TQ spot to get a clean start and stay out of trouble for the win. Team Checkpoint / Futaba driver Scott Cramer put on a charge from mid-pack to finish in second place.

As always at the Chi-Town race, we had a strong group of rookie racers. This year’s event saw CT Malvitz take the win, with Nick Richards in second and Craig Schlegel placing third.

Dash for Cash
Setting another record, the raffle raised an amazing $915.00 to be divided between the three classes. Taking the win in 13.5 truck was Hobbico-sponsored Corey Crosley. In modified buggy it was Futaba driver Chad Due, and in the modified short course race it was Al Horne.

Another tradition at the Chi-Town race is the short course team enduro race…can you say 30 minutes of pure chaos! Continuing his dominance in the short course classes, Team Checkpoint / Futaba driver Chris Arnold teamed up with Johnny LoGiudice to take the overall win and claim the $150.00 prize.

A special thanks goes out to the entire Leisure Hours crew for an awesome race and all of the event sponsors: Team Checkpoint, Leisure Hours, R/C Car Magazine, UpGrade RC, Futaba, Duratrax, Muchmore, Proline, Associated, Hot Bodies and Parama.