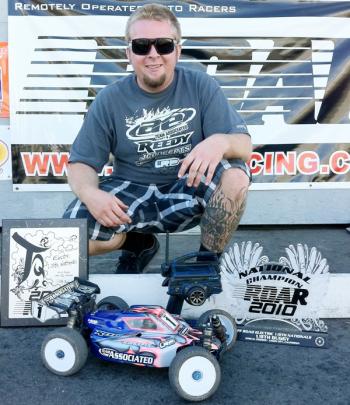 The NorCal Hobbies track located near San Francisco Bay provided the perfect facility to crown a National Champion. With technical rhythm sections and a large track layout, both the driver and equipment were equally challenged. For Maifield and his Reedy/LRP powered RC8Be two first place finishes in the IFMAR qualifying format meant he started on pole for the triple “A” main events on Sunday.

As the tone sounded to start A1, Maifield jumped out to the lead and never looked back. 10 perfect minutes of driving by the Team Associated star put him one victory away from being crowned champion. A little over an hour later, A2 got underway and again Maifield jumped out to a strong start ahead of the other nine competitors. As time ticked off the clock, other racers tried to match the pace of Maifield but none could match his consistency lap after lap. At the conclusion of A2, again it was Maifield who took the victory leading every lap of A1 & A2 and with two main event wins was crowned as the inaugural ROAR 1:8 Electric National Buggy Champion.