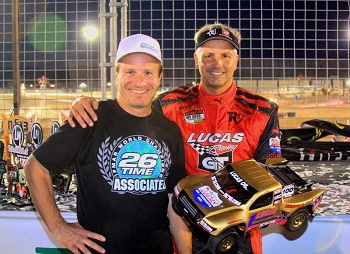 The Lucas Oil Off Road Racing Series made its way to the Las Vegas Motor Speedway for rounds 13 and 14 under the lights. With the 2012 series winding down, each and every point would prove to be valuable and the Associated Short Course Factory Team was ready for battle.

Friday’s action kicked off as the flagman turned loose a stacked field of Pro 4’s. Monster Energy / Team Associated driver Kyle LeDuc lead the pack into turn one and looked to add win number 8 for the season but, after a few laps Kyle would have a mechanical issue, letting Carl Renezeder take over the lead. After the competition yellow, it was now up to Carl to finish the race strong. Carl checked out on the field by near 5 second on his way to career victory number 100! Team Associated driver Eric Barron would cross the line in second with giving Team Associated a 1-2 finish.

Pro-Lite was up next and Monster Energy / Team Associated driver Casey Currie was the man to beat, setting fast time in qualifying. Casey would end up starting in the 6th position after the inversion and had some work ahead of him. After several laps, Casey had made his way up into the second position and was all over Brian Deegan for the lead. With cautions filling the race, event directors decided to go with a green/white/checkered finish. In turn one, Deegan put his truck on two wheels giving the lead to a hard charging Casey Currie. Casey didn’t look back and went onto take the checkered flag with Hart & Huntington / Team Associated driver Ryan Beat joining him on the podium in the third spot.

Friday night’s action was capped off with the Pro-2 class and after a bottleneck in turn one, Carl Renezeder was able to slip through and take the lead. He looked to stay there as he drove his Lucas Oil / Team Associated truck flawlessly and was never challenged for the lead at any time. Behind him, Hart & Huntington / Team Associated driver Rob Naughton battled from the 7th spot and was able to work all the way into the second position to join Carl on the podium. With the Pro-2 win it would mark career victory number 101 for Carl and a clean sweep of the Pro-2 / Pro-4 classes.

Saturday’s Pro-2 race was a wild ride for many of the drivers. Rob Naughton started on the front row and looked to get his first win of the season but, fellow Team Associated driver Carl Renezeder was hot on his heels. A late race bobble would hand the lead to the hard charging Carl and sending Rob back to third. Carl held on to the lead taking the checkered flag for a weekend sweep of the Pro-2 class. Rob Naughton would finish third, grabbing his second podium of the weekend.

The LOORRS series will be heading to Firebird Raceway in Chandler, AZ for the final round of the series and the Lucas Oil Challenge Cup Race on October 27th and 28th.