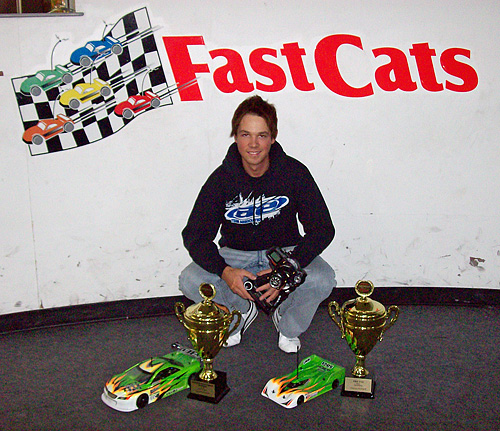 The fourth leg and season finale of the NEGS was held this past weekend in Oakville, Ontario, Canada at the famous Fastcats racing facility. Being the last race of the series, I had to make sure I would finish well since I had already missed leg two which meant that this leg would count no matter what. Friday was set aside for practice but early on I felt comfortable with both my 12R5.1 and TC5R. Having run on the track many times in the past, I knew what the track would be, like when the bite would increase.

Three rounds of qualifying were scheduled for Saturday. By the end of the day, I had secured TQ in both TC Super Stock Rubber and 1/12 Pro classes. TC Super Stock Rubber was particularly competitive with the local fast guys and out-of-towners like Paul Ciccarello and Chris Goetz competing.

The last round of qualifying and the main events were scheduled for Sunday. Having made few changes to my TC5R, I felt really confident that it would work well in the improving track conditions of the last round. The qualifier started and I was on a very good pace that would improve my TQ time by over 3 seconds. But at 4 minutes, I made a mistake in the chicane and lost 5 seconds, which meant I did not improve my time. However, I still was TQ by over 3 seconds due to my better earlier rounds. I remained TQ in the 1/12 Pro class which meant I would start on the pole position for both classes.

The mains went as well as qualifying. In Super Stock, I stayed consistent throughout the run and opened up a comfortable gap to Martin Crisp. This gap would remain for the rest of the race, giving me the win and the 2010 NEGS Super Stock Rubber TC championship.

The 1/12 Pro main featured a battle between me and Paul Ciccarello. Early on, my car was over-steering and I made a mistake in the first minute which gave Paul the lead. After three minutes, Paul made a big mistake which gave me the lead back and I lead the race until the end. This victory gave me the 2010 NEGS Pro 1/12 championship as well!

Thanks to all that made such a good series possible and keeping on-road racing alive and well in the Northeast.