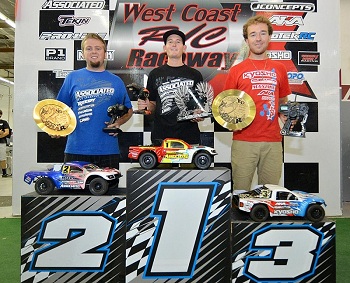 The second portion of the eight-day ROAR Off Road Super Nationals began on Thursday, August 16 with the Short Course and 1:8 eBuggy portion of the event. With fewer entries than the previous event, the organization decided to open the doors late and shorten the event to a three-day program. This was a welcomed change to those participants who had competed in the first half of the event; however, it didn’t diminish the focus or intensity of the event.

Team Associated entered the 2WD Short Course portion of the event undefeated with their flag ship SC10, having taken the previous three stock National Championships, and Ryan Maifield taking the only two modified National Championships. In 4WD Modified Short Course, the Team now had a year of development under their belt with the Factory Team SC10 4×4 and looked to compete for a podium spot in this class as well.

In the 2WD Modified Short Course event, Ryan Cavalieri and Ryan Maifield showed that they and their Factory Team SC10s were the class of the field. Setting the fastest time in each of the four rounds of qualifying, the Ryans prepared to do battle in the triple A Mains. Ryan Cavalieri just edged out Ryan Maifield for the overall TQ position and earned the #1 grid position. With each driver getting a victory in A1 and A2, the stage was set for the title battle in A3. With just a small bobble from Maifield, Cavalieri was able to open up a small 2-second gap early in A3 and maintained it as Maifield put on a charge to claim the title. As the tone sounded, Cavalieri just edged out Maifield by 1 second to claim the National Championship and the SC10’s third 2WD Modified title.

In the 4WD Modified Short Course class, Ryan Maifield was in tune with his Factory Team SC10 4×4 from the first battery pack. Setting the fastest time in three of the four rounds of qualifying, Maifield looked primed to give the SC10 4×4 its first National Championship. With a close battle in A1 with Ty Tessmann, Maifield took the win by just 0.4 seconds. In A2, Maifield was focused and ready to take the victory. An early mistake that collected the field gave the Reedy Sonic 550 4.0-powered SC10 4×4 of Maifield a large lead that grew to over 7 seconds by the end of the race. With victories in A1 and A2, Maifield gave Team Associated their first National Championship in 4WD Short Course along with their first TQ.

In the 2WD Stock Short Course class, newly crowned 2WD Stock Buggy National Champion Kevin Motter borrowed an SC10 from JConcepts’ Paul Wynn and immediately found the pace. Taking the TQ in three of the four rounds of qualifying, Motter looked to dominate the competition in the main events. In A1, Motter was able to gap the field early and maintain his lead to the checkered flag and needing just one more A-Main victory to take home his second National Championship. To begin A2, Motter had a slight bobble that slipped him back to the third position; however, with patience and determination he worked his way back in to the lead by the end of the race to claim his second and Team Associated’s third Short Course title for the weekend.

After seven full days of racing and ten classes, the ROAR Electric Off Road Super Nationals are complete and Team Associated took home a staggering eight out of ten possible titles, making this one of the most successful events ever. Thanks to West Coast R/C Raceway for hosting a great event, and congratulations to the new ROAR National Champions for their hard-fought victories.