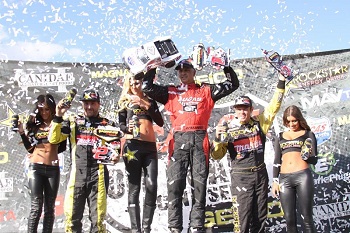 Carl Renezeder locks up the Pro 4 Champion title for the 2011 race season and Team Associated’s drivers take the top 3 spots on the podium for the Pro 4 class. Read the full race report in the press release below:

Following right on the heels of the SEMA show in Las Vegas, the Lucas Oil Off Road Racing Series swings into action!

The 13th round of the Lucas Oil Off Road Racing Series is the first race since Rick Huseman’s passing, and it began with an emotional ceremony to honor the passing of this current Pro 4 champion. Announcer Ken Stout gave a very touching and emotional speech that ended with the announcement that the Lucas Oil Off Road Racing Series is officially retiring the #36 from Pro 4 competition. Rick’s Pro 4 led the pack around the track as the honoree pace truck to begin the excitement in the Pro 4 class. After the ceremonies came to a close, all the drivers got down to the business of chasing down the title of “Champion” in all of the LOORRS classes.

The Pro 4 race started with Team Associated’s Todd LeDuc starting on the front row next to Josh Merrel and followed by his brother, Kyle, and Carl Renezeder. With the drop of the green flag, Josh didn’t waste any time and jumped out to a big lead. The caution brought all the trucks back together and made for another epic battle. On the lap following the restart, Josh rolled his truck, allowing Kyle and Carl to pass; Josh landed on his wheels and continued in third. The last few laps would hold many aggressive attempts from Carl, but he could not squeeze by Kyle, who drove on to get the win. The finishing order would be Kyle Leduc, Carl Renezeder, and Josh Merrel.

Pro 4 would continue the hard-nosed racing that was shown the day before in round 13. Starting with Team Associateds’ five Pro 4 drivers in the front of the pack, it would make for a mad dash for the first turn. Curt LeDuc and Greg Adler (filling in for the injured Travis Coyne) led the pack around for a lap until a rolled truck would bring out the caution, stacking up all the drivers. After the green dropped, brothers Kyle and Todd LeDuc along with Carl Renezeder would fight their ways into the top three spots. After all was said and done, Team Associated’s drivers swept the podium with Carl Renezeder, Kyle LeDuc, and Todd LeDuc. Carl picked up his 98th career short-course win, and locked up the title of Pro 4 Champion for the 2011 Season and his 8th career title. Congratulations, Carl, and the entire Renezeder team, from all of us here at Team Associated.

With the season coming to an end, there are still several titles up for grab. The Lucas Oil Off Road Series will be heading to Firebird Speedway in Chandler, AZ for the final round of the 2011 season and the prestigious Lucas Oil Off Road Cup Challenge. Come out and experience the greatest show on dirt before it’s all over. Round 15 will kick off the weekend December 10th. Until then, we’ll see you at the races!