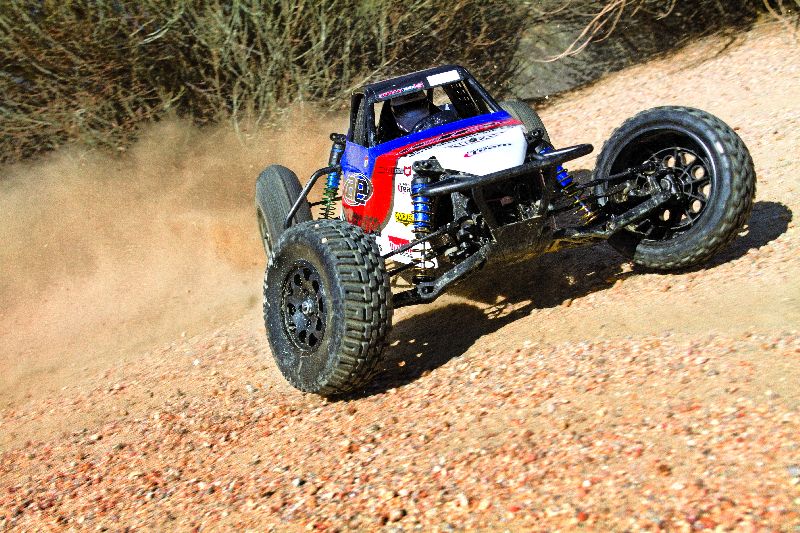 There’s no doubt that questions about Team Associated bringing an SC buggy to market have been brought up in the RC community. Ultimately, the questions all revolved around one question—”When?” Back when this whole short course revolution hit RC, Team Associated was the first to release a kit-quality SC truck to market that came from a race-winning pedigree. And let’s not forget the meticulous attention to detail that went into realistic bodies, wheels, suspension dimensions, and tires all modeled to replicate the full-size vehicles. Well, “When?” has transformed into “Now!” The SC10B RS (Race Spec) has finally arrived, and from the looks of it, was well worth the wait. Here is a first look at Team Associated’s brand-new SC10B RS.

DRIVING IMPRESSIONS
Upon first glance, the SC10B RS is certainly a looker. There’s a lot of attention to detail that went into the bodywork, roll cage, driver figure, and the interesting new front suspension design. Looks, however, are not everything. After a couple battery packs and a park with open terrain, I’m left with a good feeling about this buggy. Unlike most SC trucks with the massive short course body up top that acts like a parachute off big jumps, the SC10B RS isn’t affected by this one bit. In fact, dare I say, it feels normal while in flight—no funny tendencies or odd characteristics, just stable flight. When the buggy does come back down to land, it has a confident, planted feel to it. The narrowed front wheels help take some of the edge off the steering compared to its SC10 RS brethren, but all and all, it’s just a fun buggy to drive. Want to read more about the performance review on the SC10B RS? Make sure to check out the full test drive article in an upcoming issue of RC Car Action magazine.

Award-Winning Platform
There are very few, if any, RTR-based vehicles out in today’s market that feature the racing DNA of a three-time undefeated ROAR National Championship platform. The SC10B RS platform comes from its big brother, the SC10. Electronics are mounted nice and low onto the single lower-level chassis. From the looks of it, there’s no short list tuning adjustments on this buggy. All of the same adjustments that we’ve come to expect on an upper-level car such as camber, toe angle, anti-squat, and suspension adjustments are all present on the SC10B RS.

Water-Resistant Electronics
Even though the body covers a vast majority of the electronics, the SC10B RS comes with a water-resistant XP Brushless ESC designed for sensorless motors that features a LiPo, low-voltage, cut-off, large, blue-anodized heat sink, adjustable throttle profiles, and drag brake, and it’s even pre-wired for a cooling fan. There’s also a sealed receiver box with an integrated antenna mount.

Revised Front Suspension Design
For those who are familiar with the SC10 platform, two things immediately pop out when you look at the front end of the SC10B RS: front shock tower and suspension arms. The front shock tower is considerably wider than its SC10 brethren, making the shocks stand more upright, along with three upper shock-mounting locations and what looks to be T4 body post mounts. Next, there are gull-wing-style arms with reinforced webbing and two available shock mounting positions with concealed mounting holes to protect the screws. The new arms also look to be somewhat narrower than current generation A-arms but with thicker reinforcements.

Scale Pro Buggy Body and Roll Cage
Every part of this body screams awesomeness. Whether it’s the scale Lexan main body, integrated roll cage and side protection bars that span from tip to tail of the chassis, realistic-looking driver with helmet, or even the rubber side netting that mimics the real canvas safety nets featured on the full-size buggies. Better yet, the roll cage isn’t there just for its good looks, it’s designed to protect the vehicle from any large impacts from the side or above. The body also features a locking clip on each side that helps to firmly secure it to the main chassis.

Wrap-up
It seems like Team Associated’s committed stance towards racing trickles down to its replication of full-size racecars and into its line of RC cars as well. The attention to detail that went into body and roll cage work is simply awesome. A Pro buggy/SC buggy coming out of the Associated camp has been eagerly awaited, but from the looks of it, it’s certainly worth the wait. Associated packs the buggy with solid running gear, provides added protection to the chassis, and gives it scale appeal. What’s even more intriguing is the updated gull-wing style front suspension arms and widened front shock tower. We are more than eager to get our hands on the SC10B RS and test it in an upcoming issue of RC Car Action magazine.

Impact-Absorbing Front Bumper
Not only does the front bumper look like it came off a Pro buggy, but it also features an impact-absorbing design that flexes under hard impacts. This is done through two plastic dampers that are directly integrated into the front bumper.

Narrowed Front Wheels and Tires
In keeping the scale appeal, Associated took its KMC replica wheels and narrowed them by 10mm, followed by creating a buggy-centric tire with a blade-style pattern to mimic the full-size Pro buggies. The SC10B has also been converted to 12mm hex-style wheels. 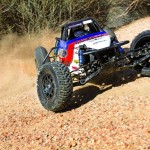 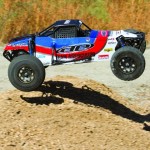 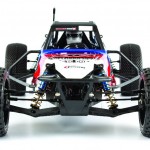 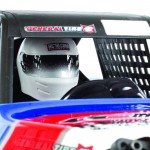 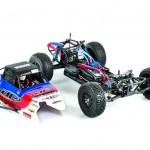 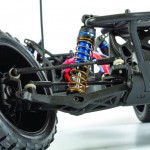 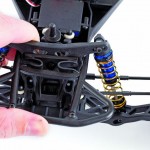 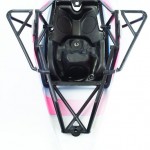 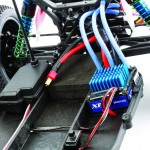