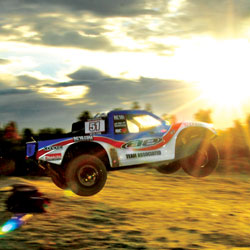 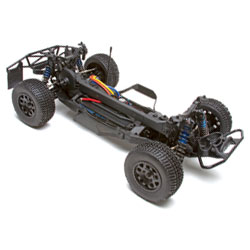 When I recently visited Team Associated to get the first look at their latest flagship vehicle, the SC10 4×4, the anticipation was killing me. I sat down at Team Associated’s conference table with engineer Kurt Wenger, and he smiled and said, “This truck is designed to make you win.” In a few minutes, AE’s president Cliff Lett asserted, “This vehicle is, by far, the longest and most expensive project in Team Associated history. Engineer Jason Corl looked at me like a proud parent and said, “This project has been my baby.
Finally, Kurt walked the truck into the room. I almost couldn’t believe my eyes: it’s an entirely new platform from the ground up, filled with next-level design and performance features. The remainder of the day was devoted to treating the SC10 4×4 like a supermodelunder the scrutiny of my video camera lens, hundreds of flash pops and curious, prying eyes. I even had a dance with the 4×4 at OC/RC’s indoor track. She’s a light, fast and race-oriented machine, and as Kurt said, the SC10 4×4 is designed to make you win.

DECOUPLED SLIPPER
No center diff? No problem. AE’s next level decoupled slipperacts like the next best thing. Using an internal thrust bearing assembly, the top shaft connects the slipper unit to the front drive belt and the rear gearbox. According to AE, the decoupled slipper allows the front and rear tires to slip independently, offering increased traction and stability.

GO AHEAD, BEAT IT UP
This truck is not a typical fragile 1/10-scale 4WD buggy converted into a truck; AE designed the 4×4 as a truck from the ground up to handle all of the abuse you can throw at it. Thick suspension arms, heavy-duty rod ends, 3.5mm hingepins and large 32-pitch gears create a bulletproof platform. The inner camber-link ball studs pass through the shock tower mounts and thread into metal inserts below, virtually erasing stripped ball studs from existence.

TOP-MOUNT COMPONENTS
Handle the truck for five seconds, and you’ll immediately notice the lack of screwheads on the bottom of the chassis-only two are visible! All of the components are mounted on top of the chassis, which is a genius concept you’ll appreciate if you’ve ever picked compressed dirt out of dozens of screwheads with a hobby knife.

BELT DRIVE
For those of you expecting a short course version of the shaft-drive B44.1surprise! AE designed the SC10 4×4 around an all-new, lightweight, low-drag belt drive system. The belt itself is thick and durable, measuring 5mm wide with 211 teeth. Due to the layout, the belt drives the front drivetrain only, while a standard 3-gear gearbox drives the rear end.

AE says that belt drive works best for explosive acceleration, compact chassis layout and reduced drivetrain friction, plus the belt allows it to use 32-pitch gears with large teeth. Think belts may not be durable? You’re aware that 1/8-scale on-road cars with 4hp nitro engines and Velcro-like traction use belts, right? The SC10 4×4’s belt should be just fine.

Over-sized SHOCKS
Everywhere you look, the 4×4 exudes a strong, race-capable quality that’s both confidence inspiring to its owner and intimidating to its less-than-purpose-built competitors. Large 13mm over-sized-filled shocks are one such example. The shocks may be built pressurized with bladders or emulsion style, and a lower seal cartridge with snap-in limiters allows you to fine-tune without dumping out all of the shock fluid.

IT’S ALL METRIC!
Team Associated ditched SAE hardware for metric fasteners. Most of the fasteners use a 2.5mm hex-head wrench (others use 2mm) to reduce the number of wrenches required to build and maintain the truck. AE also reduced the number of different screw lengths to simplify the building process and make replacement fasteners easier to find.

THREE-PIECE CHASSIS
AE calls its new three-piece molded tub chassis a low CG and low polar moment design. In English, this translates into we designed it with a lot of win. As the chassis pieces wear, you can replace each section individually. When assembled, the chassis forms a nearly glass-smooth bottom surface that will glide over ruts and bumps.

FRONT “CLICKER”
If you’ve dreamed of having a front one-way differential for increased steering but also hoped for a standard differential at the same time, it may have felt like wanting your cake and eating it, too. With a front one-way clicker installed between the drive belt and front diff, you can have both. When loosened for high-traction tracks, the clicker locks up under acceleration but freewheels and clicks loudly off power (giving it its name), effectively giving the truck a front one-way with rear-only braking. Lock the clicker down, and you have full-time four-wheel drive and four-wheel braking.
ACCEPTS 550 OR 540 MOTORS
The speed freaks among us will opt for a high-powered, 550-size brushless motor, but Associated stresses that the 4×4 ran perfectly well during testing with a 540-size standard brushless motor, too. The only motor AE is aware of that will not fit is Novak’s Ballistic SC 550, as the motor can is 7mm too long. Existing 550-size LRP and Tekin motors fit perfectly, as do all 540-size brushless motors.

PEFORMANCE
After spending a day drooling over the SC10 4×4 at Team Associated, I met up with Kurt, Jason and Cliff Lett for a morning of track testing at OC/RC Raceway in Huntington Beach, CA. Punching the throttle unleashes a fury of spinning tires and tracer-bullet acceleration. AE tells me that the 4×4 weighs in at a feathery 6.1 pounds, but with a 2S 60C LiPo and an LRP 550 4.5-turn motor installed, the truck feels closer to 4 pounds. It doesn’t take long to grow accustomed to (or drunk on) the 4×4’s effortless acceleration. Rolling into rhythm sections, a quick squeeze of the throttle produces massive forward thrust that makes you look like a better driver than you are. At least, that’s how I felt.
The challenge with any 4×4 vehicle is steering. An inherent design complication with four-wheel drive means that 4x4s tend to push in the corners. Somehow, AE has created an SC truck that steers and steers a lot. On the track, the 4×4 turns in obediently, and as the truck exits, you apply throttle to find the truck digging in and cornering on a tighter line than you may have expected. Credit the SC10 4×4’s decoupled slipper for the truck’s increased steering in bumpy corners, allowing the front and rear tires to slip independently. Although the front clicker was fully functional on our test truck, we never engaged it during my brief test session; the truck simply didn’t need more steering, and I probably couldn’t have handled it anyway. AE is aware of the truck’s turning capabilities, with adjustable steering bump stops that actually allow you to reduce steering when needed. When’s the last time you track-tuned a 4×4 vehicle to remove steering rather than find more of it? Overall, the SC10 4×4 feels like a pure race truck that’s capable of running circles around its competition. When going from full speed to full braking, the belt will naturally skip 3-4 teeth, and this is normal and to be expected. Jason and Kurt both reassured me that this would not cause problems, and that during their entire R&D period they had yet to cause a belt to fail. I cannot wait to build a SC10 4×4 test vehicle and run it through a full battery of testing on multiple tracks in an upcoming issue.

WRAP UP
Are you as excited to build and drive an SC10 4×4 as much as I am? After my brief testing session at OC/RC and a few days with engineers Kurt Wenger and Jason Corl, I’m counting the days until our test vehicle arrives.
Be sure to visit our all new website at RCCarAction.com to watch our videos with Kurt and Jason as they describe the SC10 4×4 in their own words, and stay tuned to an upcoming issue of RC Car Action for a full track test review!