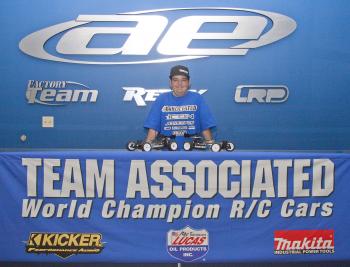 Now over 15 years later, Kinwald returns home to where it all began. A wiser, more experienced Kinwald will bring his vast knowledge and development experience to the Team Associated stable. He will be working closely with Team Associated Engineering, developing current and future projects, including the recently released SC10 4×4. Additionally Brian will continue to compete at the highest level at the major events including the IFMAR World Championships, ROAR Nationals and other major events.

Many new racers may not know Brian’s history, but rest assured he is one of the top racers of all time. With a resurgence of electric offroad, and many “old-school” racers returning to the sport, just ask around and stories of hand made parts, legendary races and dominance are sure to surface.

When asked, Kinwald had this to say about his return to Team Associated, “I am so excited to be back home. Cliff Lett has always been my hero. He’s the one who made me who I am and I can’t wait to work with him and the Team again.”

The enthusiasm is shared equally at Team Associated where Team Manager Brent Thielke commented, “Brian Kinwald is a class act. He works hard, races clean and provides our team with experience and immediate A-main finishes. Brian will have a unique role with Associated and we all look forward to working with him for years to come.”

Based out of Tucson, Arizona Brian will continue to use LRP speed controls and accessories, Reedy engines, XP Digital servos, Icon motors and batteries, JConcepts tires and bodies, and an Airtronics transmitter all skinned by Stick-It1 Racing. Welcome home Brian!