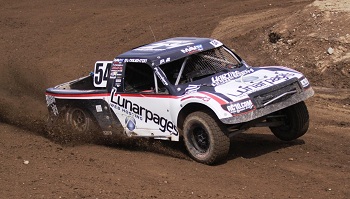 The Lucas Oil Off Road Series looked to light up the night sky at the famous Glen Helen Motorsport Park for Rounds 9 and 10. Friday kicked the weekend off with a five-minute qualifier which set the grid for both Saturday’s and Sunday’s races. Team Associated drivers Kyle LeDuc and Carl Renezeder went out and showed what they had for their hometown fans, setting top times in the Pro-4 and Pro-2 classes. Lucas Oil would invert the top 6, putting the top qualifier inside row 3.

After setting the fifth fast time in the Pro-4 class, Travis Coyne was assessed a penalty that made him give up his front row starting spot for one at the back of the pack. Starting from the back didn’t discourage Travis at all. He drove the race of his life to work as he went from the back to the front twice on his way to the podium in the third position. Later in the evening, the Pro-Lites took to the track with 24 trucks making up the field. Casey Currie has been running strong all year, and looked to continue his consistency and make his way to the front and pick up his first win this season in his Monster Energy #2 truck. Casey battled hard and made some great passes on his way to a second-place finish on the night behind young gun Bradley Morris.

Once again the Pro-4s kicked things off and top qualifier Kyle LeDuc was looking for some redemption after having a mechanical issue that sidelined him the night before. Both Eric Barron and Kyle LeDuc made their way to the front of the pack showing why they are both the dominating drivers in the class. Kyle looked inside and out to make a pass, but Eric had just a little bit more than Kyle and was able to hold off the attacks for the win and the weekend sweep. Kyle was able to keep the rest of the pack behind him and claim a second-place finish ahead of his brother Todd LeDuc. ProLites took to the track next, where Casey Currie got pushed around in the start and fell back a few positions. Casey dug deep and pushed his way back up through the field and into the third spot. Pro- 2 was the last class of the night and continues to show why it’s the premier class of the event. Robby Woods battled hard with the large field of Pro-2’s and finished off the night with a third-place finish.

The LOORRS series is heading up north to Sparks, NV, just outside of Reno, to unveil the newest track featured in LOORRS. Be sure to check out all the hard-hitting action the Lucas Oil Off Road Racing Series has to offer. To stay on top of race results, standings, and driver profiles, head over to www.RC10.com or http://www.facebook.com/TeamAssociated for up to the date stories, news and videos.