When it comes to Baja Bugs, you either think they’re awesome or you’re wrong. I’m definitely not in the “wrong” group, and was happy when the opportunity came to finally build a Baja Bug of my own that wasn’t just a short-course truck dressed up in a Beetle body. The easiest way to get down in the dunes would be to simply build up a box-art Tamiya Sand Scorcher, but I wanted something with more of a custom vibe and 4WD. Those goals lined up perfectly with another item on my RC bucket list: a Tamiya CC-01 buildup. The CC-01 is one of RC’s original scale trucks and features a unibody-like chassis with independent front suspension and solid-axle rear end, with proportions just right to use under a Tamiya Blitzer Beetle body—with a little modding, that is. 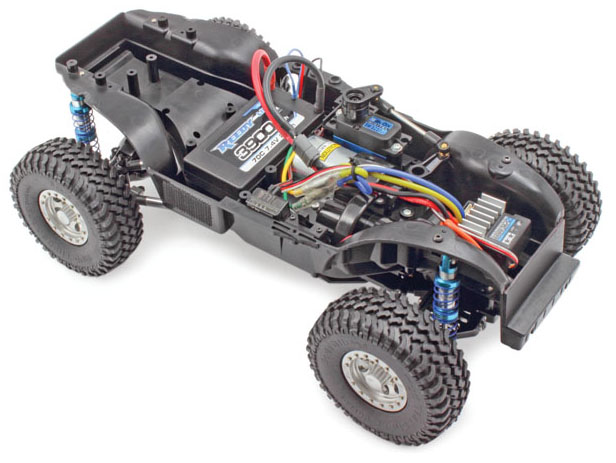 The CC-01’s drivetrain is integrated directly
into the chassis, leaving just the motor to peek out. Note the Reedy shorty pack required to fit within the narrow Beetle body. The wheel wells needed some major trimming to get the body to sit on it properly.

Chassis Modifications
The Tamiya CC-01 chassis wasn’t designed to accept a bug body, so some modifications were needed to mate the two items together. Since the body tapers slightly in the front and rear, I had to cut down the fender wells to match as closely as possible on the chassis. I also had to make room for the nose of the body at the front of the chassis. I used a cutoff wheel and sanding drum in my rotary tool to make the modifications. The stock truck mounts the battery from side to side, but there’s not enough room for a standard-length pack thanks to the narrow width of the body. The solution was a “shorty” Reedy LiPo battery. Since the pack is small and pretty light, I mounted it to the chassis with a strip of Velcro instead of fabbing up a custom mount. This saved me some time and cleans up the look of the chassis. I wanted to get a little weight over the front axle to help with traction on the trails, so I mounted my speed control in between the front wheel wells with some double-sided tape.

Scale Treads
While I was looking around the RC4WD website, I decided that I needed to step up the tire and wheel game for this project, and scale wheels don’t come much classier than RC4WD’s Mickey Thompson Classic Lock design. The wheels are machined from solid billet, and the internal bead-lock system is secured by 14 scale bolts. Official M/T logos are machined in, and even the center caps are aluminum. The wheels are shod with RC4WD 1.55-inch Mud Thrashers, which suit the Beetle’s proportions perfectly. 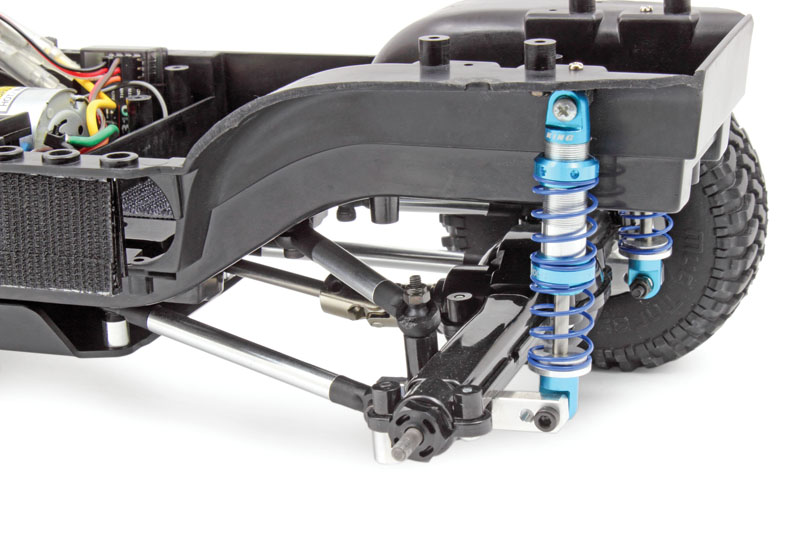 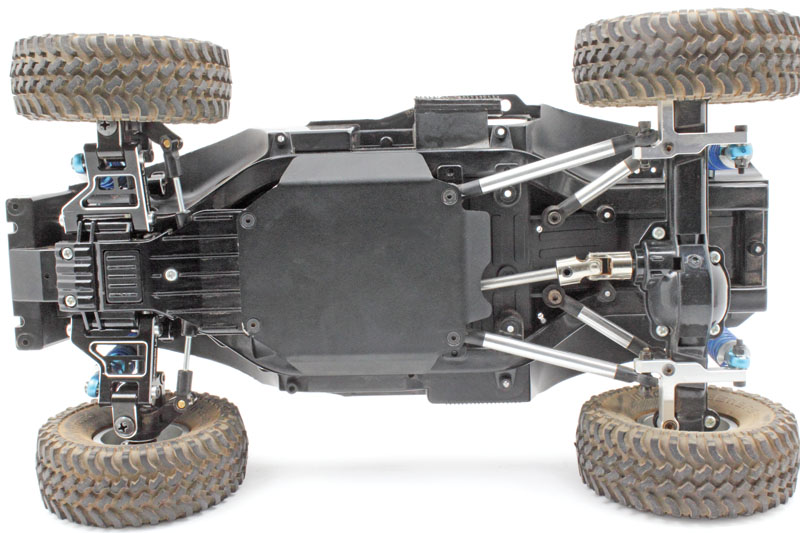 The flip side. The skidplate is included with the JunFac rear suspension kit.

Improved Suspension
I wanted my CC-01 Bug to have plenty of “go” to match its “show,” so the suspension got a big helping of aftermarket love. The flexible front arms and plastic steering knuckles and C-hubs were replaced with aluminum versions from Hot Racing. Their black-anodized finish is strategically milled away to create attractive silver highlights, and of course they’re much stiffer than the plastic parts. The rear suspension’s plastic lower links are also very flexy, and I mocked up a few custom solutions before I discovered JunFac’s excellent upgrade package. The kit comes with all the necessary hardware to install heavy-duty aluminum 4-links, which eliminate all flex and add lots of strength to the suspension. JunFac also includes a skidplate to protect the bottom of the chassis and rear driveshaft. The setup looks killer, and sure beats cutting and threading rods myself. Scale-sized shocks are the finishing touch, and RC4WD’s King replicas were the perfect choice. They feature aluminum bodies and are threaded for easy ride-height adjustments. 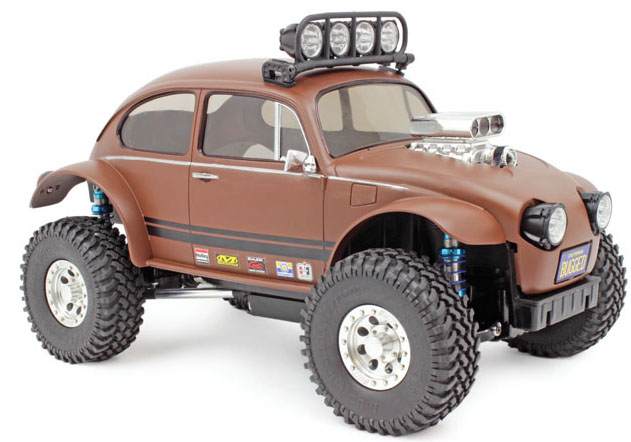 Pro-Line’s HD lights look terrific and can be made functional with standard 5mm LEDs. I opened the body and made a shelf to hold the RPM intake and blower for an authentic through-the-hood look. RC4WD came to the show with these great-looking Mud Thrasher tires and Mickey Thompson wheels. They really added great grip and scale appearance to my truck.

Customized Bug Body
Tamiya’s Blitzer Beetle is injection molded, which gives it excellent detail and also makes it perfect for modding. To trick out the body, I first glued in the sunroof panel and nose piece, and used Tamiya putty to fill the gaps around them. Next up was an RPM mock intake and blower, which called for some special fitting. It’s designed to sit directly on the hood, but the Beetle’s curved shape made the blower look tacked on. It really needed to be sunk below the hood to look right, so I carefully cut the hood to fit around the blower, then made a styrene tray to hold it. With a coat of flat-black paint, the tray is invisible, and it really sells the look of a complete engine under the hood. Pro-Line’s HD light set outfits the roof and was a simple bolt-on. Another pair of lights fit into the recesses in the Beetle’s nose, and to keep everything looking scale and body-clip-free, I attached the body to the chassis with Velcro. 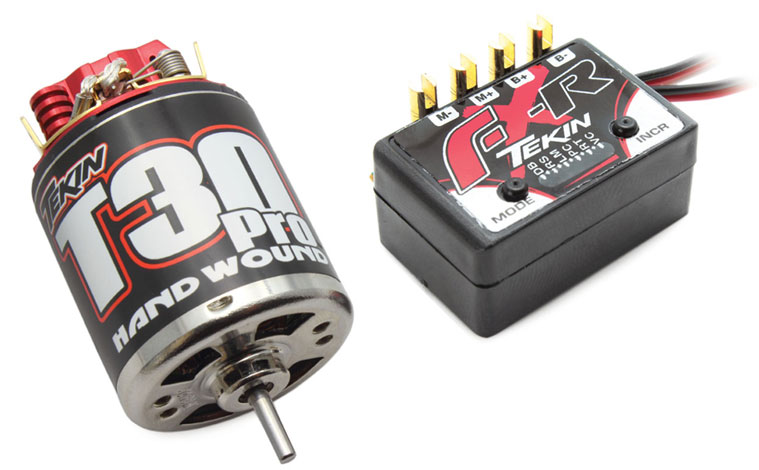 Trail Power
I built up the CC-01 with its included power system, which I found to be surprisingly fast. A speed of 15mph is at least twice as fast as I need for the more trail-oriented driving I’ll do with the car, so now that this build is done I’m going to swap the power system for Tekin’s FX-R and T30 motor combo. In addition to dropping the speed down while boosting torque, the FX-R is fully and easily adjustable—either directly at the speed control itself via the QuickTune interface, or you can use the optional HotWire to jack into the FX-R with your PC or smartphone. I’ve used this setup in a Vaterra Ascender with great results, and I look forward to putting it into the CC-01. 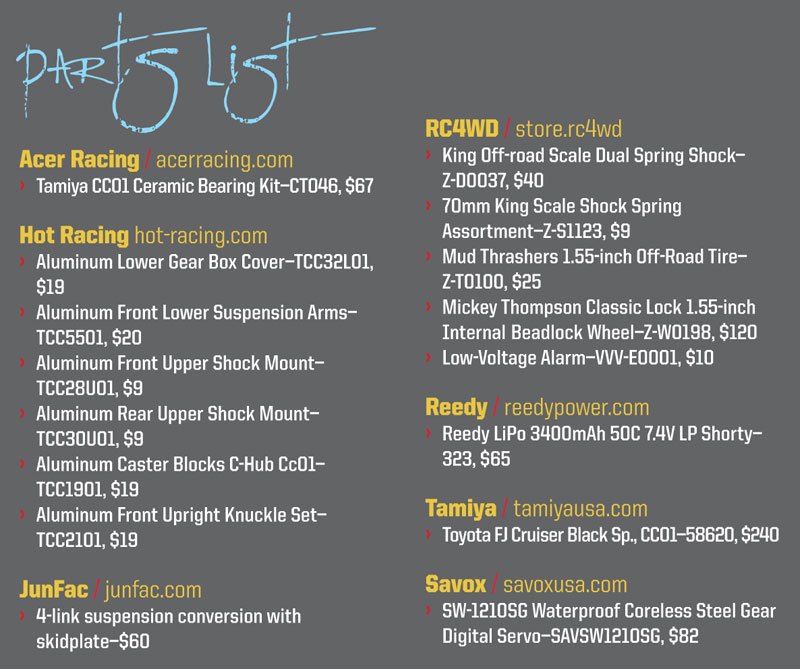 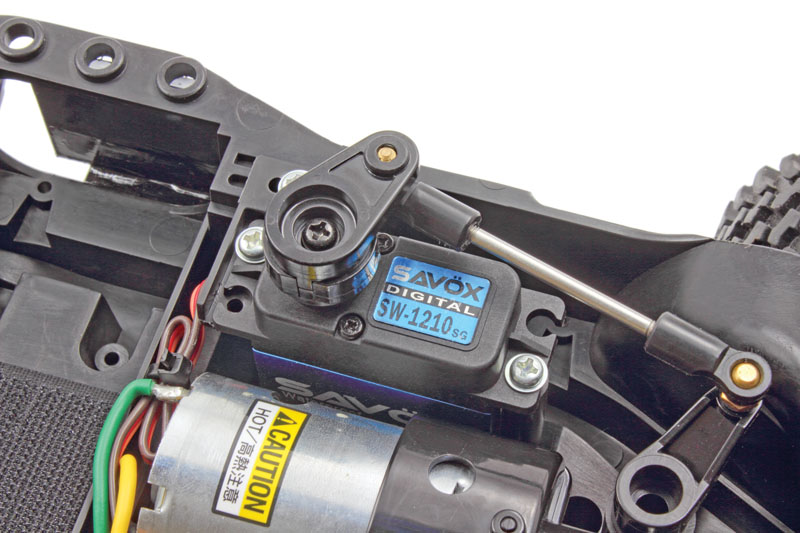 Electronics
One of the nice things about a Tamiya kit build is that Tamiya includes a motor and electronic speed control. Since I’m just going to be bombing around the yard with this truck, I don’t need a speed control and motor to get me high rpm or lots of bottom-end torque. The stock Tamiya electronics are going to be just fine for what I am doing. A nice thing about the Tamiya speed control is that it can be used to run the stock brushed motor, but if you want to upgrade to brushless later, you can still use the same speed control to run that brushless motor. There’s no low-voltage cutoff for LiPo use though, so I added a low-voltage alarm from RC4WD. For plenty of steering power, I went with a Savox SW-1210SG. It comes in 222 oz.-in. of torque, which is overkill for a truck like this, but too much beats too little. It’s also waterproof, so if I happen to make my way into a puddle, I don’t have to worry about it failing. 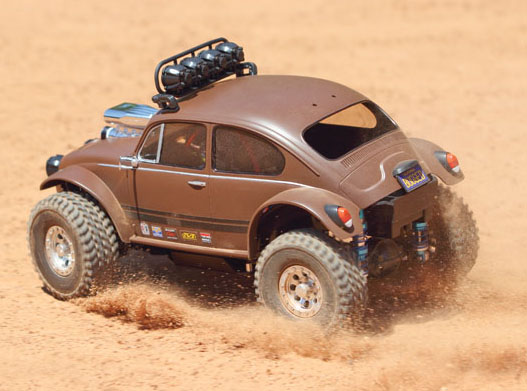 Performance
Once my Tamiya CC-01 Bug-bodied beast was finished, I headed outside for some quality time in the dirt. I drove the truck around at slow speeds at first and was very happy with its scale appearance. The suspension soaked up the bumps well, and it was cool seeing the tires tuck up in the wheel wells when driving over them. I parked the truck up and nailed the throttle, and I was happy to see that it had enough grunt to spin the tires as it quickly got up to its 15mph top speed, which was faster than what I was expecting. I took the truck over to my newly finished rock-crawling area, where I have various surfaces including small rocks, hills, and logs to test various trucks that I review. The CC-01 bug had no problems getting up the steepest inclines, thanks to the high-torque motor and the grip of the RC4WD tires. Steering around some of the tight areas that I have set up was not much of a problem for the steering servo. However, on some of the rock sections, the steering left me wanting more. Since this is a fairly light truck and the servo isn’t going to be seeing a lot of stress, I took it inside and removed the stock Tamiya servo saver and installed an aluminum servo arm to eliminate any flex in the steering. Back out on the rocks, the steering response was much better. In the rocky section where I was driving, the front and rear suspension did a great job of conforming to the smaller rocks in the area. There was no flex at all, thanks to the Hot Racing front suspension arms and JunFac rear suspension, and it made my truck feel as if it had plenty of grip and control on
all surfaces.

Final Word
I’m very happy with my CC-01 bug body project, and am excited to get more wheel time with it. It has an awesome look to it, and I left some room for any upgrades that I might want to add later. This was my first time driving a CC-01, and I have to say that it’s really fun. When installing the stock 540 motor in the chassis, I was sure that a motor swap was going to be happening later down the road. But now that I have some time behind the wheel, I’m completely happy with the torque and speed that the stock motor provides and won’t be changing a thing. The next mod for this truck will be locked diffs so that it can do a better job of making it around on the trails.