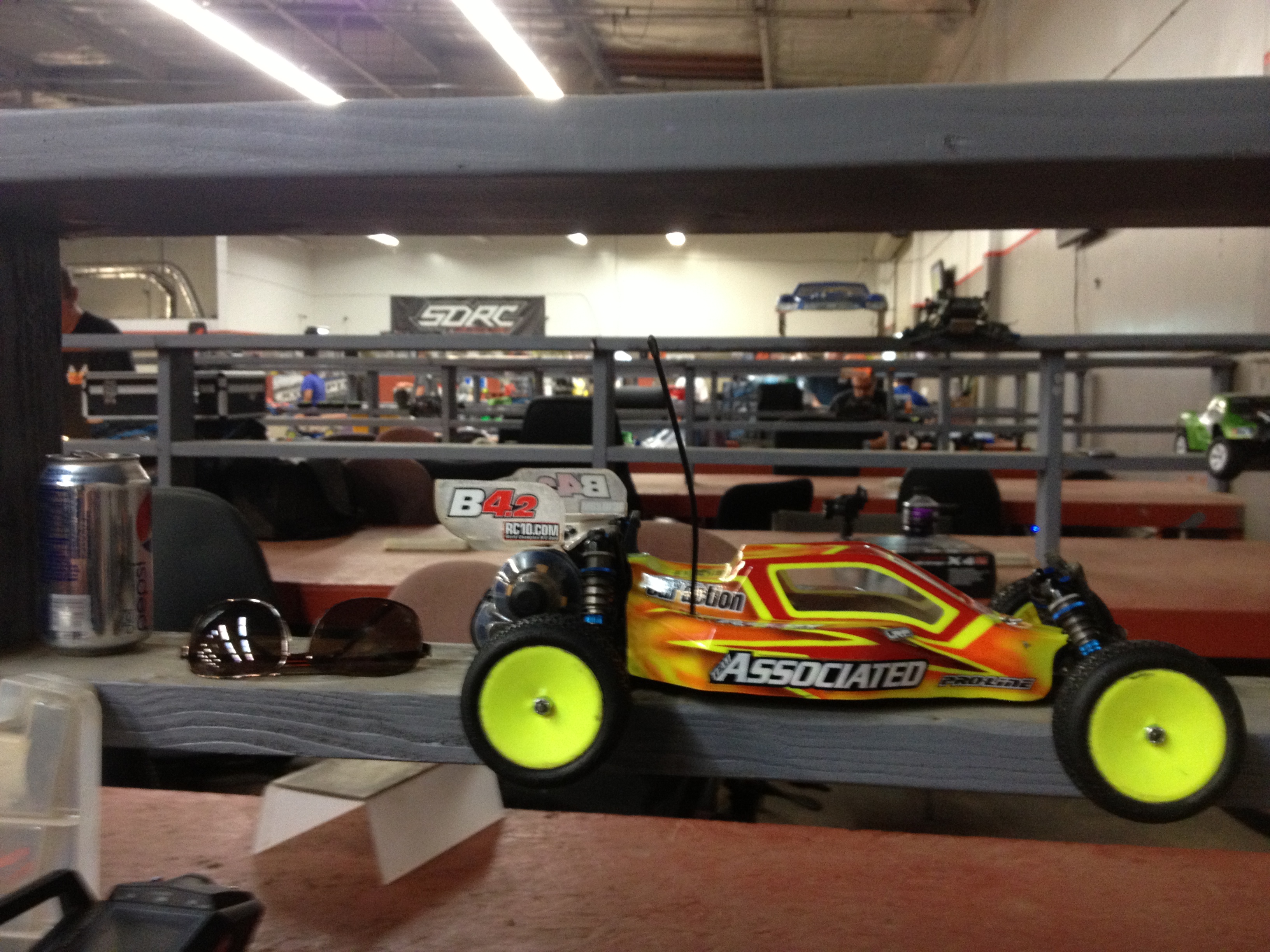 Last night’s club race at SDRC in San Diego, CA was one of the most frantic and fun nights at the track that I’ve had in a long time. Admittedly, I don’t get down there as often as I’d like and although I try to race at least a few times a month it’s can be difficult to keep up with the regulars when I’ve got a different car for a different class every time I show up. Lately I’ve been racing the Team Associated B4.2 Factory Team that I put together for our Pro Racer special issue, burning up tires in the Modified Buggy class using the Reedy 7.5-turn motor that they supplied with our test kit. Despite my lack of wheel time I typically figure out what I’m doing (they change the track quite often) around the time for the main event, put in a respectable drive fueled solely on experience and grit (with the caveat that I HATE losing), and then head home.

Last night was a bit different.

The evening got off to a rocky start. I decided to go for a run at the last minute, and by the time I picked myself up off the living room floor after jogging a few miles around the neighborhood, showered, packed my stuff, sent a text to RCCA editor Joel Navarro asking him to sign me up, and completed the 30-minute drive I showed up shortly before racing started. No practice on the new layout? No problem – that’s typical anyway. I dragged my hauler bag into the pit area and Joel handed me a surprise.

It was a borrowed 17.5 motor. Only a few people had signed up to run Modified, so everyone decided to bolt in stock motors so that we’d have two full heats in that class instead.

Aside from competing (perhaps ironically) with a Traxxas Slash, complete with the stock electronics, in the 17.5 short course class a few times over the last couple of years I haven’t run stock in years. In fact, this was my first time racing stock 2WD buggy since 2003 – back when we were still running NiMH batteries and brushed motors. I scrambled to get the motor installed in time for round one, threw my car on the track without saucing the tires just in time for the IFMAR start, and slipped and slid my way to a mid-pack finish in the heat for tenth overall. I had some work to do.

The short break between the first and second rounds was also spent scrambling. I made some changes to the car, turned up the motor timing, geared it up as high as I could with the smallest spur gear they had at the hobby shop, setting the slipper again, resetting my speed control, and actually saucing the tires. Round two was certainly better than the first. I was more comfortable with the track layout, remembered that I was racing stock without the power to clear every gap at the blip of the throttle like I typically do in the modified class, and completed the race without too many bobbles. Even still, my borrowed motor was slow enough that I got passed down the straightaway (!) and the best I could muster for an overall starting spot was 6th.

Back to scrambling in the pit area.

This time, I used a Dremel to elongate the motor plate slots to move the motor back further, allowing me to install a larger pinion. One of my long-time racer friends let me borrow a faster 17.5 (while laughing at the one I had been originally loaned, which was quite old and lethargic), adjusted the diff and slipper again, adjusted the ride height, sauced the tires, and hit the track for the main event. It was like driving a totally different car! With the extra horsepower provided by borrowed motor #2 it felt a lot closer to the speed I’m used to, and after a few warm-up laps I felt more confident about my chances than I had all night.

I nailed the start from the back of the pack and settled into a battle for third – as luck would have it, I was dicing with the friend who lent me the motor. We duked it out for several laps (including me motoring by him with his own powerplant!) before I caught and passed 2nd place, setting my sights on the leader. I followed too closely, got collected when he crashed just a few laps from the end, and dropped back to mid-pack. Another wreck with just two laps to go put me back where I started, and that was all she wrote. It’s not often that you can give up 12 seconds in the span of three laps and live to talk about it on the podium.

After spending the evening thrashing to get on pace and throwing it away in the final minute once I had finally put myself in the position to win, I gave back the borrowed motor and drove home with a smile on my face…along with the desire to pick up a 17.5 motor of my own. It’s always more fun to race with a large group of closely matched racers than it is to drive around with just a handful of competitors, even when it’s at a slower pace. As for those who were laughing at my struggles all night…just you wait. There’s always next week!